Why Canada's carbon pricing plan should give money directly to Canadians 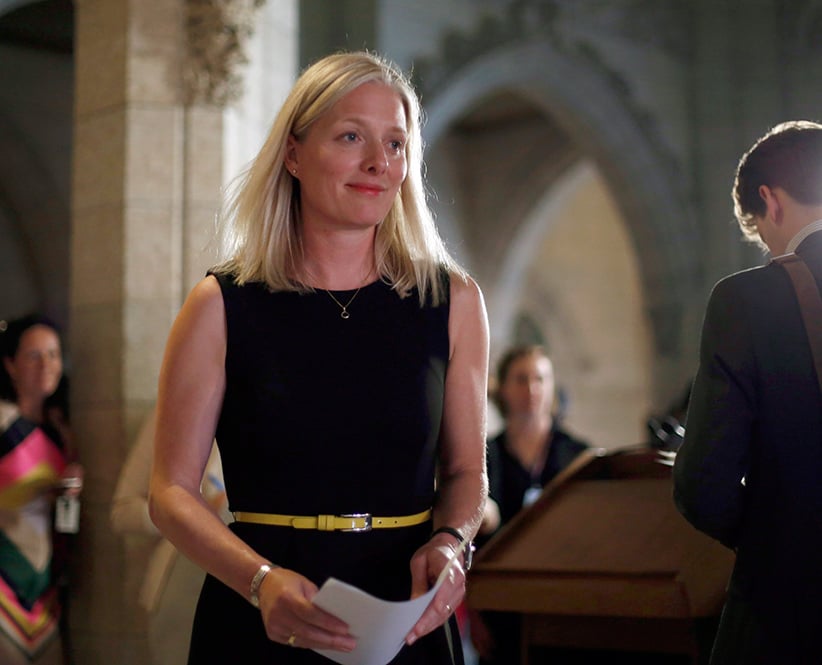 Environment Minister Catherine McKenna concludes a media availability as she makes her way to the House of Commons on Parliament Hill in Ottawa, Thursday, May 18, 2017. (Fred Chartrand/CP)

On Thursday, Catherine McKenna, Canada’s environment minister, took the next step towards a national carbon pricing plan for Canada. The federal government tabled a discussion paper on the so-called federal “backstop”—the default carbon pricing rules that will apply in those provinces that choose not to put in place their own system.

Under the federal plan, any province or territory that brings in its own carbon price—whether it’s a carbon tax like British Columbia and Alberta, or cap and trade like Quebec and Ontario—will be exempted from the federal backstop if it meets certain conditions. Provincial systems must cover most fossil-fuel emissions and have a price level equal to the backstop price or, under cap and trade, must result in equivalent emissions reductions as a price would have achieved. Provinces that do not bring in their own system will fall under the federal backstop rules. Under the backstop, a direct tax or levy will be applied to all fossil fuel emissions, starting at $10 in 2018 and rising to $50 by 2022. These measures assure that all provinces will have systems with a roughly similar price, emissions coverage, and roughly equivalent effort at reducing emissions.

While these parts of the federal plan have been clear since last fall, today’s discussion paper adds two more important details. Two of the biggest criticisms of carbon pricing in Canada have been that it could hurt the competitiveness of Canadian industries, and that it could impose unaffordable costs on Canadian households. The federal plan will go a long way to resolving the first problem: to deal with competitiveness, the federal plan, like Alberta’s system, will include output based allocations to ease the impact on large industrial emitters. Plants producing more than 50,000 tonnes of carbon dioxide will only be charged the carbon price to the extent to which their emissions are higher than the emissions of best in class facilities in their sector. This will prevent companies in internationally competitive fields like oil and gas, cement, steel, and fertilizer from being fully impacted by the carbon price, and give them a strong incentive to improve their performance to meet or beat best-in-class standards.

But the plan also opens the door to solving the second. The federal government had already said that it would not keep carbon revenues from the federal backstop, but would return all revenues to their province or territory of origin. However, this still left open the possibility that provinces could simply spend the money on whatever they wanted—which could make the federal carbon price a form of tax increase. In recent days, however, federal sources have hinted that rather than send the money to provinces, it could send revenues raised directly to citizens within those provinces. The discussion paper is silent on this point, merely saying that the government is “open to feedback,” although the accompanying press release suggests that they are “evaluating how best to return the revenues, for example, by giving it back to individuals and businesses in the province.”

Well, let me offer this feedback: 100 per cent of the revenues should be given back to taxpayers.

The simplest and fairest approach is to simply return all carbon revenues raised back to the citizens of the jurisdiction it came from. This could be done by an equal per capita rebate or divided (with perhaps a half share for dependent children). While there are several options for returning revenues to individuals and companies, it may be hard to design specific federal tax cuts province by province since provinces will vary in the amount of carbon tax collected per capita. But it would be relatively simple to calculate the amount of revenues collected in each backstop province and divide it up equally. The federal government would then simply send each individual or household a cheque for that amount (perhaps quarterly, as with the current GST credit). Making the rebate equal per capita would ensure fairness, as it would represent a greater share of income to a lower income household than to an upper income one. And it would be simple, transparent, and easily understandable.

Take Saskatchewan, the province that has most strongly opposed carbon pricing, and thus the most likely to face the federal backstop legislation instead of introducing their own plan. If Saskatchewan’s transportation and electricity emissions were fully priced, and industrial emissions received about two-thirds of any carbon price back as output based allocations, a $50 per tonne federal carbon price in Saskatchewan would generate over $2 billion in annual revenues. If this was simply divided per capita, every adult in Saskatchewan would receive more than $2,000 per year, and more than $1,000 per child, or more than $5,000 for the average household.

Of course, as businesses and consumers adapt to the carbon price, they will also reduce their emissions, which will reduce both the carbon price paid and the amount of rebates to households. But at roughly $2,000 per person, direct rebates would more than offset any increased costs for gasoline or electricity that Saskatchewan’s residents would face. The federal carbon price would be fully revenue-neutral, putting every dollar raised back into the pockets of consumers and households. Industry would not be severely affected thanks to output-based allocations, and average households would be ahead of the game.

Now if Brad Wall has other ideas for how to spend carbon revenues—such as a technology fund or paying for carbon capture and storage—or if he wants to make his own modifications to the system, such as exempting farm diesel fuel as some provinces have done, then he is free to bring in his own system any time he likes. But if he does not bring in a made-in-Saskatchewan plan, the federal backstop plan can be designed in such a way that it does not hurt Saskatchewan businesses or taxpayers, but still makes sure that all carbon emitters in Canada are taxed, regardless of their province of origin.

The federal government is on the right track with its new backstop proposal, which will bring much needed consistency to carbon pricing across Canada. And with good design, Ottawa can ensure that a strong national carbon price in Canada can reduce emissions while not harming the competitiveness of our industry, or hurting consumers and households.