Why can’t we get clean water to First Nation reserves?

Boil-water advisories are in place in 93 First Nations communities, for complex reasons—and Justin Trudeau's five-year goal to end them may be 'unrealistic' 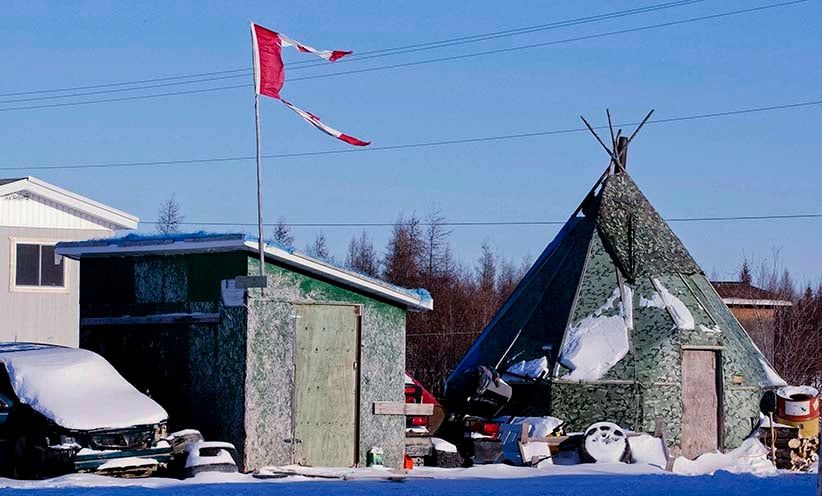 The remains of a Canadian flag can be seen flying over a building in Attawapiskat, Ont. on November 29, 2011. The federal government is forcing the troubled Attawapiskat First Nation to pay a private-sector consultant about $1,300 a day to run its finances – even though the government’s own assessments say the third-party management system is not cost-effective. (Adrian Wyld/CP)

Lalita Bharadwaj is a toxicologist and associate professor of public health at the University of Saskatchewan, who specializes in human-health risk assessment in rural populations. Bharadwaj co-authored a recent study, published in the Canadian Water Resources Journal in September, examining the “quantifiable progress” of First Nations water-management strategies across the country between 2001 and 2013. She spoke to Maclean’s from Saskatoon one day after Liberal Leader Justin Trudeau promised to end boil-water advisories on First Nation reserves within five years, if elected prime minister. Today, 93 First Nations communities must boil their water for one minute before drinking or using it. In some places, such as Neskantaga First Nation in Ontario, this has been going on for more than two decades.

Q: What are your thoughts on Trudeau’s commitment to end all boil-water advisories within five years, if elected?

A: Based on our research, there have been over 10 years of policies developed from 2001 to 2013, and it’s clearly shown that the approaches have not yet made a difference within the First Nations communities. To promise to end boil-water advisories within a five-year period is just not a realistic goal.

Q: In what sense? What would need to happen for that to be realized?

A: There needs to be an understanding that we have 600 First Nations [communities] and they are not homogenous, and one top-down approach will not address the issue. There need to be more individual consultations with each community. The population is different, the geographical location is varied, [as is] the leadership, the number of people [needed] to facilitate human resources toward the management of water. I could go on.

Q: How does water management actually operate now for communities on reserves?

Q: You say Trudeau’s promise is unrealistic. How could he be imagining this is possible?

Q: Your study looks at the “quantifiable progress of the First Nations water management strategy” between 2001 and 2013. What does it show?

A: It’s an unfortunate situation. We have not made any improvements, even though billions of dollars have been put in place to resolve the issue.

Q: What improvements haven’t been made?

A: Improvements in infrastructure, in technical ability and capacity in training, in addressing high-risk communities. Really, if you go through the results section of that paper, you’ll notice that a lot of the information is missing in whether the outcomes have been met by the plans and policies put in place.

Q: If we’re looking at the number of boil-water advisories over the years, are there fewer? Would that be a measure of success, or lack of success?

Q: What have been the barriers to making improvements? Why hasn’t all the money that’s been spent made a difference?

A: One of the big issues, in my opinion, is that we don’t recognize First Nations as unique groups of individuals; the issues around water are not the same for each community. As a result, money being spent, for example, to increase training or education about how to operate a water system may work for some communities but not others. Another example [is] geographic location and remoteness: Putting money toward a treatment plant may work for one community, but not another, where it may break all the time because of permafrost.

Q: A number of audits over the years have shown confusion over responsibility for water provision. That’s a big problem.

A: You have Aboriginal Affairs and Northern Development, who provide 80 per cent of funding toward water-treatment systems and infrastructure for First Nations communities. The chief and council need to provide 20 per cent. Then you have the role of Health Canada, who will monitor the drinking-water supply. But also, there are roles within First Nations where you have environmental health officers [who] may be employed through the tribal council, and who might be employed through Health Canada, also conducting water-quality assessment. And in some of the research that we’ve been doing recently, we’ve noted that there has not been consistent annual monitoring of First Nations water supply. And then, [for] raw water, there is Environment Canada. So when you think about it, water regulation and governance involves multi-institutions and is fragmented, because the individual government agencies don’t talk to each other.

Q: What is the consequence of inconsistent monitoring?

A: Inconsistent monitoring, at least in my opinion, will pose a health risk.

Q: Do we know if, or how many, First Nations people have died because of contaminated water?

A: We don’t have those numbers.

Q: Could it have happened?

A: Yes, it could have happened.

Q: How real is that threat?

A: I think it’s a real threat. If you look at the health statistics, there are a lot of young people on First Nations, and if, for example, a communication of a microbial risk isn’t provided to that community, there could be exposure to young children who are more vulnerable. Also, elderly people who have compromised immune systems would also be at higher risk.

Q: Are those data tracked?

A: I don’t have those data. I don’t know if they are available, and how accurate they could be. From a practical and logistic perspective, it is difficult to track a water-borne illness unless it is specifically doctor-diagnosed, where you see a sudden spike in individuals presenting with diarrhea or vomiting, because you need to link that exposure to drinking water to the clinical diagnosis. It’s often difficult to do that, even in the general population, unless you see an outbreak.

Q: So what needs to happen before communities are no longer under boil-water advisories?