Having resolved to transition from female to male, a hockey star makes a tough call—one more season 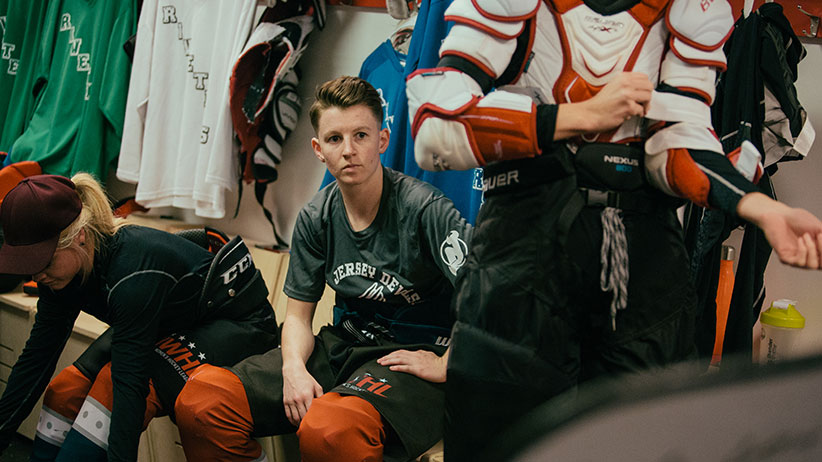 Harrison Browne at practice in Newark (Photograph by Annie Tritt)

You know those really ugly wannabe moustaches boys try to grow in the earliest stages of puberty—the ones that barely cover the upper lip? Harrison Browne can’t wait until he can start one. “That’s like a rite of passage,” says the 24-year-old professional hockey player, laughing.

Browne was initially hoping to see a few whiskers this fall. That was the plan when he announced his retirement from the National Women’s Hockey League (NWHL) in March 2017, having already made history on the ice. In his second NWHL season, he became the ﬁrst openly transgender athlete to play on an American pro sports team. The ﬁrst time he scored, in the season opener, the announcer shouted into the PA system: “His ﬁrst goal of the season!” Browne’s hockey career also seemed to end on a perfect note—the Buffalo Beauts capped the year by winning the Isobel Cup—but he was ready for something more. “I was looking forward to transitioning, being a regular guy and going on with my life,” Browne says. “I was looking forward to the anonymity.”

Not that he wanted to quit hockey. The sport was his passion and he was still in his prime playing years. But when each game or practice finished, and Browne was back in the city—maybe out grocery shopping or grabbing a coffee—it was only a matter of time until the occasional person mistook him for woman. Inadvertent or not, being misgendered hurt.

The flights, hotel and rental car were all booked for pectoral surgery in Florida for June 2017. Hormone therapy would start as soon as his body healed, and there’d be no coming back to women’s hockey, as per the NWHL’s transgender participation policy.  Technically, he could play against men, but at 5-4 and only 120 pounds, a professional men’s career was far from realistic.

Browne had made up his mind to give up on playing the sport he loved to get the body he sometimes dreamed he had. His next focus would be ﬁnding a job in Chicago, ideally, where his girlfriend lives, so the two could move on to the next chapter of their lives. But mere weeks into retirement, Browne realized life doesn’t always go according to plan.

The ﬁrst step in any job hunt is creating a resumé—and that starts with putting a name at the top of the page. That’s where Browne encountered his ﬁrst post-hockey career challenge. “Legally, his name isn’t changed on his passport or birth certiﬁcate,” explains Browne’s girlfriend, Carly Racusen.

They talked it over: does he write down Harrison Browne—the name he goes by, the name in all the articles? Or does he put down the name his parents game him at birth and the one that remains on his official documents? They opted in the end to go with Harrison; it’s the name he uses in his day-to-day life, after all.

They ﬁgured the rest should get easier. Browne’s CV boasts a career of pro hockey, a degree in international business management from the University of Maine and work experience as a sales intern during school. Browne envisioned getting a front-ofﬁce job with a pro sports team, but after a couple of interviews, the only offers involved entry-level stuff, like ticket sales. Even if he were to start so low on the corporate ladder, he had another problem: his nationality. It’s not easy for a Canadian to get an international work visa in the U.S. for an entry-level sales job.

“I have this itching need to transition,” Browne says. “I retired [from hockey], but when it came time to look for jobs I was not getting anywhere.”

He wasn’t yet ready to marry his American girlfriend of almost two years—they have still never lived in the same city—and the work visa he had as a pro hockey player was going to expire.

All of which is to say, without women’s hockey, Browne would soon ﬁnd himself without a job and out of America. He and Racusen would be a border apart, her working in Chicago and him likely on his way back home to Oakville, Ont., to start his career over. “The whole reason I wanted to transition was to move on with my girlfriend,” Browne says. “And I was not going to be with her anyway.”

It was a disaster scenario. What good is transitioning to get a body he wants if it forces him to quit the sport he loves and live a country away from the girl he adores? Hockey, body, girl: he couldn’t have all three. 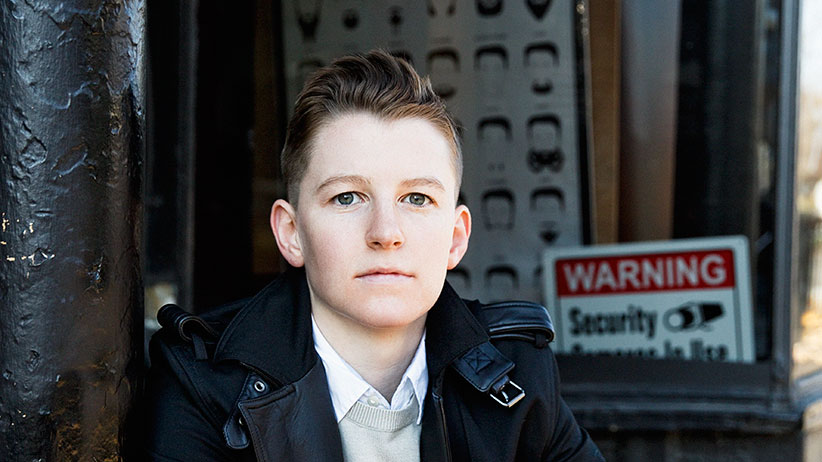 Harrison’s arc was tough to witness for his sister, Rachel, who had long stood up for her little brother, repeating a mantra to their parents as they struggled with the idea of having a transgender child: “Just say ‘he.’” Harrison lacked the conﬁdence to correct their pronoun usage, himself, explaining: “I needed Rachel on my side to assert certain issues and stand up for me when I couldn’t.”

Now she had to stand up against him. The minute Rachel heard about his planned retirement from hockey, she gave him a call to change his mind. “I told him, ‘You can’t do this. It’s way too premature,’ ” Rachel remembers. “I was very emotional.”

She told Harrison that he was just getting started in professional hockey and, more to the point, in drawing attention to transgender rights. Browne was voted by fans to the 2017 NWHL all-star game, where he scored twice. He’d be doing himself and the community a disservice, she said, if he left the limelight now. “I could see the ripple effects of what it meant for so many people,” Rachel says.

As Harrison’s job hunt proved more difficult than anticipated, the words of his sister echoed in his head. He’d seen the kids who came out to his games, lining up to get his autograph, telling him he was an inspiration to them. He wanted to dedicate more of his time to the LGBTQ community—and his platform as a pro athlete would help. He could make extra money at speaking engagements or with sponsorship deals to bolster what little earnings NWHL players make, all while building his own brand.

He could also rectify the poor choice of parting words in a New York Times interview, where in explaining why he retired, he said that after his transition, “It will just be me.”

He was always ready to play hockey, again.

“You must really love that sport to say I’m going to sacrifice another year of not being in the right body—not feeling whole,” says Racusen.

But Browne says he’s been in this body for 24 years; he can handle one more. “If I can selfishly make some money and make a name for myself, that’s definitely worth delaying it even one more year.”

In August, Browne signed with the New York Riveters (since renamed the Metropolitan Riveters), hoping the scale of the New York market would lead to greater opportunity. He scored in the team’s season opener and says he’s excited to play another year of hockey; less thrilling is the prospect of joining teammates in restaurants where servers invariably address the group as “ladies.” Without facial hair or a deep voice, alas, Browne admits he scans as a pubescent boy.

Still, he says, “I’m more than willing to put up with it for one more year for all the good that will come from me staying in this body.” It turns out some things—even an ugly moustache—are worth waiting for. 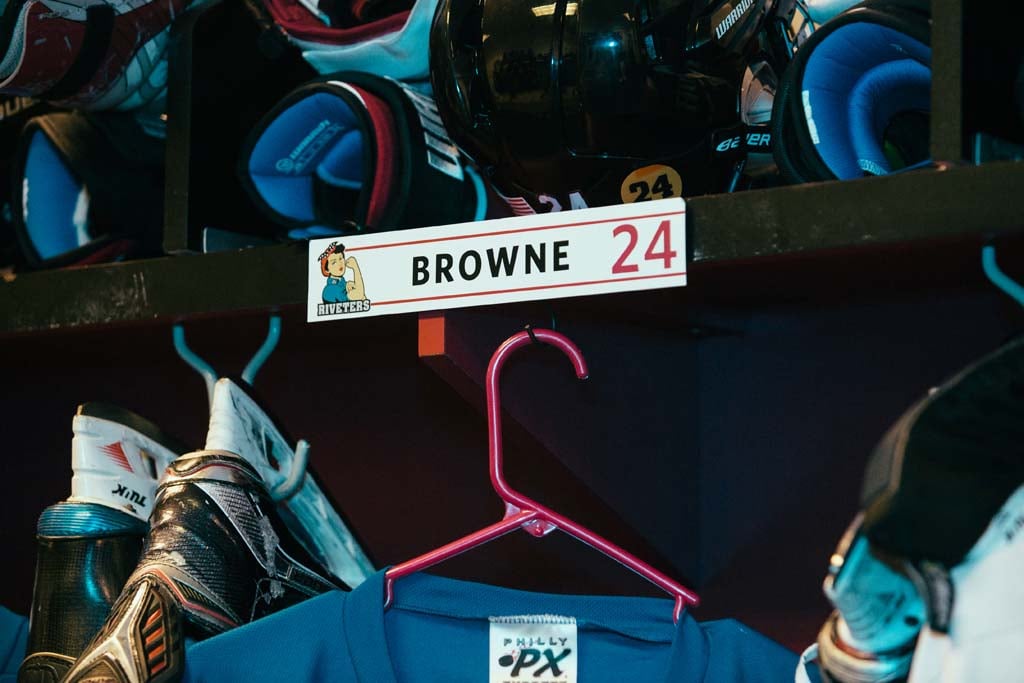