Why has Colten Boushie’s mother had to work so hard just to prove her son's humanity?

From the moment she learned of her son’s death to the days following his killer’s acquittal, Debbie Baptiste has shown tremendous strength and courage in her fight for justice and change. 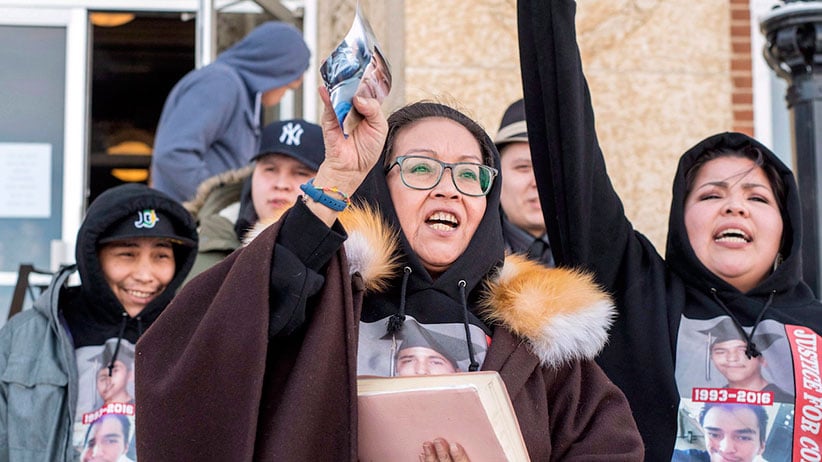 Debbie Baptiste, the mother of Colten Boushie, holds up a picture of her son as she leaves the Court of Queen’s Bench during a lunch recess on the fifth day of the trial of Gerald Stanley, the farmer accused of killing the 22-year-old Indigenous man, in Battleford Sask., Monday, February 5, 2018. THE CANADIAN PRESS/Liam Richards

The death of a child is one of the most shattering events a person can endure. Debbie Baptiste lost her 22-year-old son Colten Boushie in August 2016 in horrible, violent manner. Boushie, a member of Red Pheasant First Nation in Saskatchewan, was shot in the head by a white man named Gerald Stanley, after he and some friends drove onto Stanley’s property. In the year and a half since her son’s killing, Baptiste has had little time, peace or privacy to grieve.

The four RCMP officers who notified her of her son’s death were curt and disrespectful, she has reported. Some even had their weapons drawn, according to witnesses. When Baptiste learned of her son’s death, she fell to her knees on her front porch screaming. After she was taken inside, she lay of the floor of her living, rocking in pain. The officers entered her home and began to search it without her permission. They asked Baptiste if she’d been drinking.

The family said the RCMP treated them as if they were criminals. (An internal investigation cleared the Mounties of misconduct.) That was just the beginning of the cruelty and injustice Baptiste would face: A campaign of anti-Indigenous hatred on social media and in comments on news stories about the case. A trial in which Stanley’s lawyer blocked every visibly Indigenous person from serving as a juror. A verdict that found Stanley not guilty of all charges, including manslaughter, despite extremely dubious evidence presented by the defence.

Throughout, Baptiste has demonstrated astonishing courage and strength. Alongside Colten’s cousin Jade Tootoosis, his uncle Alvin Baptiste and other relations, she’s been a powerful presence at rallies and protests. She’s spoken to politicians and the press wearing shirts emblazoned with Colten’s image, or holding a photograph of him in her hands. Less than 48 hours after the jury returned its verdict in the Stanley trial, she and her family flew to Ottawa to meet with federal ministers and the prime minister to advocate for change in the political and justice systems. The movement #JusticeForColten, she’s said, stands for justice for every Indigenous person in Canada. 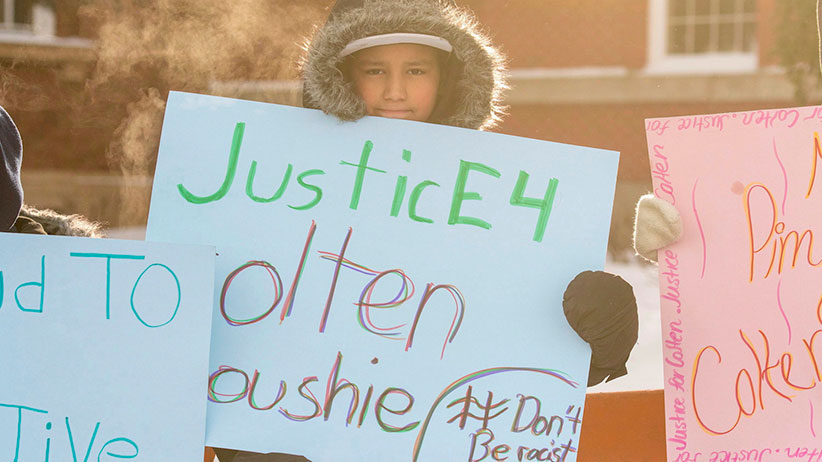 Grade 7 and 8 students from the Piyesiw Awasis School on the Thunderchild First Nation hold signs outside of the Court of Queen’s Bench on the day of closing arguments in the trial of Gerald Stanley, the farmer accused of killing 22-year-old Indigenous man Colten Boushie, in Battleford, Sask. on Thursday, February 8, 2018. THE CANADIAN PRESS/Liam Richards

There are too many mothers and families bereft in Canada, too many Indigenous children and young people treated as though their lives have little value and their futures little potential. Attempts to disrupt and destroy Indigenous families have a long history in Canada, from the residential school system to the Sixties Scoop to current-day abuses by child welfare agencies. Many, many times over, Cindy Blackstock, the executive director of the First Nations Child and Family Caring Society, has pointed to broken promises and endless failures in addressing the inequality in healthcare services and education for Indigenous kids. “Children only get one childhood,” she’s said. “Fix it today.”

Families from the Wapekeka First Nation in Ontario pleaded with the federal government for mental health supports for children and were turned down; soon after there was a rash of youth suicides. Parents in remote communities fear sending their children to larger centres for educational opportunities, after a string of suspicious deaths of several young people attending high school in Thunder Bay. “Our kids’ gymnasium should not be a funeral home,” Nishnawbe Aski Nation Grand Chief Alvin Fiddler, told the CBC after a crisis meeting called to address the deaths. “I just remember sitting there and thinking, this isn’t right … that we’re burying children.”

READ: The Colten Boushie case and a possible ‘quick fix’ for the legal system

Another pervasive danger to young Indigenous people’s lives is the perception that they are a threat. When Colten and his friends drove onto Stanley’s property, the farmer grabbed a hammer and loaded his gun. The Mounties who later searched Baptiste’s home appeared to consider Colten more as a suspect than a victim. Even some media coverage seemed to agree with this perspective, referring to the “Colten Boushie trial” rather than accurately calling it the “Gerald Stanley trial.” (Similarly, the Globe and Mail recently ran a headline about the trial of Raymond Cormier, the man accused of killing 15-year-old Tina Fontaine in Winnipeg in 2014, that highlighted the girl’s substance use — as if somehow it was her behaviour that should be under scrutiny.)

This racially biased victim-blaming and assumption of criminality is rampant. A 2017 report from the Ontario Human Rights Commission found that constant scrutiny from store clerks, police and public servants leaves many racialized and Indigenous people feeling mistrustful and unsafe. “Racial profiling is a daily reality that damages communities and undermines trust in public institutions,” the report concluded.

Parents of Indigenous children who fear that their children are unsafe and won’t be treated fairly by police and other authority figures have good reason. School administrators are more likely to suspend and expel Indigenous and other racialized children. Police are more likely to confront and arrest them. Just this week, APTN News reported on a message about Colten Boushie posted to a private Facebook group for Mounties. It read, “Too bad the kid died but he got what he deserved.”

My son is Oji-Cree and Ojibway. He’s not that much younger than Colten was when he was killed, and Colten’s death and the trial of Stanley have struck close to home. Our son has been told to be cautious of authority figures and careful around police. When he leaves the house, there’s always a small catch of anxiety for me. There have been too many encounters that have exposed people’s biases and prejudice: the coach who singled him out for punishment when he was part of a group of boys (the rest of them white) caught goofing around and roughhousing in a locker room; the teacher who threatened to call the police when he got in a fight in middle school; the shop keeper who hovered near him in a toy store until I intervened; the bus driver who screamed at him for going in the wrong door.

Sometimes I think I’m paranoid, that I’m reading racism into every encounter. But then I consider the violence of Gerald Stanley, the jury who acquitted him, the violent racist vitriol that has been directed at Indigenous people online during the trial and its aftermath, and the Mountie who believed Colten “got what he deserved.” I’m frightened of what some dangerous, armed stranger could think my son deserves one day.

Colten’s family says he was funny, gentle, hard-working and considerate. He loved his Cree culture and he loved his family. He liked basketball and dreamed of being a firefighter. All that potential is gone, while the man who ended his life walks free. In her meeting with Justin Trudeau, Baptiste showed the prime minister letters she has received since her son’s death. One came from a group of children on a Saskatchewan reserve. They’re confused as to why someone who had acknowledged killing her son was not sent to prison.

I don’t know how to explain this my son either. I don’t know how any parent of a child of any race can explain Colten’s death and the outcome of Stanley’s trial to them with anything but anger at this injustice and shame over Canada’s continued mistreatment of Indigenous people.

Colten’s family’s advocacy, however, has not been in vain. The federal government just announced a new legal framework to foster self-government. It’s a start, but as with all government promises regarding reconciliation and Indigenous rights, ensuring it happens requires vigilance.

In the meantime, Colten’s family seems to have found a small bit of peace. “Our voices have been made a priority here and we feel like we are finally being heard,” Colton’s cousin Jade Tootoosis said after speaking with government ministers. “Colten is not able to stand with us physically so we stand here for him. We speak for him and we will continue to do that.”