'Why me?' Gay musician heckled with slurs at legion gig 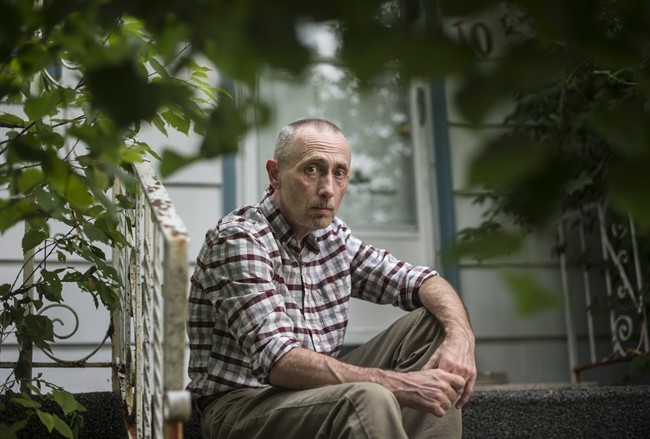 Musician Bernie Doucette, who says he experienced homophobia during a gig at a legion, poses in Halifax on Tuesday, July 12, 2016. (Darren Calabrese/CP)

HALIFAX – A gay musician says he’s angry and upset that he heard someone yell a homophobic slur at him during a recent performance in Halifax that he was then asked to cut short.

“I’m trying to deal with it and I’m not doing a good job of it. Today I’m upset, today I’m scared, today I’m angry. Today I’m asking myself, ‘Why me?’ ” said Bernie Doucette in a phone interview on Tuesday.

Doucette said he and his partner of 20 years, Eldon Gallant, were parked roughly 150 metres from the Royal Canadian Legion Halifax Branch Vimy 27 last Sunday having a cigarette before the show when they noticed a man in a blue jacket staring at them.

When it was time for him to start playing, Doucette said he gave Gallant a peck on the cheek and left the van.

He said the problems started during his first set, when he noticed the man in the blue jacket going from table to table, whispering to people and pointing towards the stage.

As he started his second set, Doucette said he heard someone call out from across the room: “Get that faggot singer off the stage.”

After 36 years in the music business, Doucette said he’s learned to brush off hecklers — but has never experienced homophobia while on stage.

“Nothing bothers you. Nothing,” said Doucette, 52. “But what if someone says something that’s so personally hurtful to you that all you want to do is just find some place to cry? You can’t do that. All you can do is maintain that facade and get through the show, which is what I did.”

Doucette kept playing, but shortly after, the bartender told him it was “time to call it a day,” he said. When he asked why his performance was being cut short, he said it was because he was playing “funeral music.”

“With covers of Jimi Hendrix, Bob Dylan and Neil Diamond — it was a little peppy for any funeral I’ve been to,” said Doucette, who is from Cape Breton but currently lives in Halifax. “People were tapping their toes and singing.”

He said after further questioning, the bartender told him, ‘Look, we’ll pay you in full if you just leave.”

“Then I realized what was going on because this was after that horrid statement had been made. I was being asked to leave. I’m not welcome here,” he said, adding there were several large “clearly drunk” men standing at the bar and he felt threatened.

Doucette said he’s played in many legions and has always been treated “exceptionally.” He’s even played at this particular legion branch twice before without any problems.

“Let me be clear: this is not the legion. This is a couple of very ignorant, small-minded, immature people,” said Doucette. “You can have good people in a room, and unbeknownst, you can have lunatics amongst them, and that’s what this was.”

Bar manager Chris MacNeil said the legion is investigating the alleged homophobic slur. He says the legion does not condone homophobia in any form.

But MacNeil said Doucette was not asked to leave on Sunday because of his sexual orientation. He says guests of the legion were not enjoying the music and were consequently leaving, so Doucette was asked to stop playing.

Doucette said he lives a quiet life and some of his family and friends may not even know he’s gay. He says he’s still trying to wrap his brain around what happened.

“How do you deal with the emotion that someone you don’t even know hates your guts? I’m beside myself,” he said. “I thought we got past all of this (homophobia). It’s worrisome.”