Why Megadeth is not to blame for the Moncton shooting

In the rush to understand the shootings, reporters are grasping for details—heavy metal lyrics included 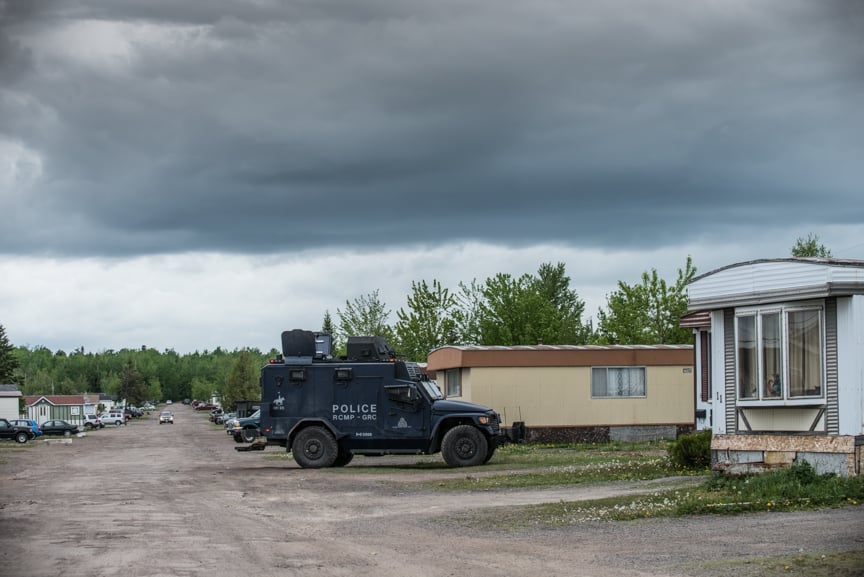 An RCMP vehicle is parked in the Ryder trailer park outside of the home of shooting suspect, Justin Bourque in Moncton. (Photo by Scott Munn)

In 1988, three years after Tipper Gore famously co-founded the Parents Music Resource Center (PMRC) and triggered a fracas that culminated in Senate hearings on Capitol Hill and parental advisory stickers on explicit records, the heavy metal band Megadeth released a song called Hook in Mouth, a rant against censorship.

The chorus took direct aim at the PMRC.

“F is for fighting, r is for red,
Ancestors’ blood in battles they’ve shed.
E, we elect them, e, we eject them,
In the land of the free, and the home of the brave.
D, for your dying, o, your overture,
M, they will cover your grave with manure.
This spells out freedom, it means nothing to me,
As long as there’s a PMRC.”

On Wednesday, shortly before the shooting began in Moncton, N.B., Justin Bourque is believed to have posted the first three verses of Hook in Mouth to his Facebook page. The lyrics, apparently Bourque’s last post, have been widely noted as reporters piece together whatever sparse bits of information are available about the man suspected of killing three RCMP officers and injuring two others before sending police on a dramatic manhunt.

This would be, strangely, the third time in recent years that a reference to Megadeth has been linked to a high-profile murder in Canada. In April, Matt de Grood was noted to have posted a song title and album—Dread and the fugitive mind—the world needs a hero—on his Facebook page shortly before the 22-year-old allegedly stabbed five people to death in Calgary. Eight years before that, Kimveer Gill cited a Megadeth song, A Tout le Monde, before shooting 20 people, killing one, at Dawson College in Montreal.

In the rush to understand these events, reporters  grasp at whatever details are available—with social media providing a modern and easily accessible platform for details—and so Megadeth and its song about the PMRC have been referenced in hundreds of news items over the last few days.

The history of heavy metal being connected in one way or another to violent crimes is relatively long and old. The Columbine shooting was linked to KMFDM, Rammstein and (erroneously) to Marilyn Manson (the perpetrators are now not believed to have been fans). Jared Loughner, the Arizona man who killed six people and injured U.S. congresswoman Gabrielle Giffords in 2011, was linked to Bodies, a song by metal band Drowning Pool. The same song was also referenced in regards to a shooting in 2003, while Slipknot and Metallica have, variously, been noted in connection with violent crimes. In the mid-1990s, the band Slayer was sued in connection with a murder. In earlier years, Judas Priest and Ozzy Osbourne were blamed for suicides.

Of course, heavy metal isn’t alone in this regard. The Beatles’ White Album will always be associated in some small way with Charles Manson. Perhaps few other works of art can match the associated infamy of J.D. Salinger’s classic novel, Catcher in the Rye—linked as it can be with the murders of John Lennon and actress Rebecca Schaeffer, as well as the attempted assassination of Ronald Reagan.

That so far it seems there has been no rush to blame the music of Megadeth for what happened in Moncton, nor any great fussing over the meaning of listening to heavy metal, might suggest that we’ve come to realize these things are never so easily explained away.

In the case of de Grood, Martin Popoff, a Canadian writer who has covered heavy metal extensively, later suggested it would be a misreading of Dread and the Fugitive Mind to believe it had anything to do with acting violently. And in the wake of the Dawson College shooting, Mustaine expressed outrage at Gill—”That guy was not worthy of being a Megadeth fan”—and stressed that A Tout le Monde should not be associated with violence. “I was so angry that this guy would use my song, and that he would try and turn that beautiful song into something ugly and nasty,” Mustaine told the CBC, explaining that the song was about his late mother. “I had a dream that she came back to me, and said, ‘I love you.’ That’s the whole song.”

Megadeth performed A Tout le Monde in Montreal, undaunted, the crowd reportedly singing along to the chorus. “[Gill] is not going to control us from the grave,” Mustaine said.