Why people chauffeured hundreds of eels around Ottawa this summer

It was part of a massive volunteer effort each year to help the eels migrate around a dam that blocks their path, and it raises questions about Canada's Species At Risk Act 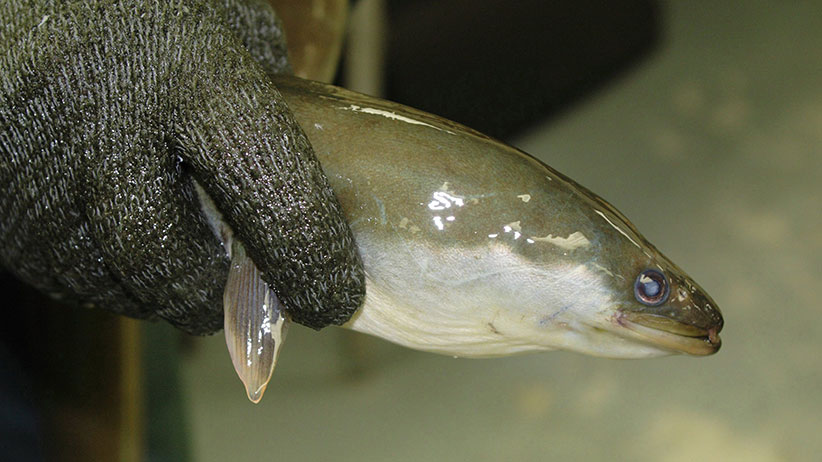 An American eel is seen in Ontario, Canada. New York and Canadian scientists say the American eel is vanishing from Lake Ontario and the St. Lawrence River, where it once numbered in the tens of millions. (Ontario Ministry of Natural Resources/AP/CP)

“That’s like a stopgap measure,” says Patrick Nadeau, director of the Ottawa River Keeper, which has conducted this operation for the past two summers, shuttling the eels from a dam near Grand Isle, Que. to the shores of downtown Ottawa. “Obviously you can’t keep trucking eels.”

The American eel is one of the species declining in Canada; in a report released in September by the World Wildlife Foundation, half of all species it monitored in the country are losing numbers. The Liberal government has listed about 25 new species as at risk since coming to power, but the eel is not one of them, and critics say the lacklustre Species At Risk Act forces the public to protect species themselves.

“Eels were basically the salmon of Ottawa,” says Nick Lapointe, one of the volunteers in the “trap and transport” effort. “They’ve basically been obliterated.” By weight, eels were once the most plentiful species in the Ottawa River and the largest commercial industry in Lake Ontario. While they still thrive in other parts of North America, ﬁsheries and hydroelectric dams in Quebec and Ontario have reduced them to less than one per cent of their former local population. Lapointe points to eel enmity— “they’re much maligned, but I think they’re pretty cute when they’re up close”—and public apathy—“most people in Ottawa don’t even know they exist here.”

The eels are all female, and they need to migrate to the Ottawa River each summer to grow (the males stay back in the Sargasso Sea near Bermuda). But the eels, growing to about one metre long as adults, cannot get through the Carillon Generating Station at the border of Quebec. So, on a Tuesday in July, Lapointe and a team trapped about 400 eels with nets, loaded them into tanks, and drove them to Ottawa. Volunteers unloaded the eels into new buckets containing anesthetics, and once the eels were drowsy, placed them on an operating table and injected them with tags to track their future behaviour. After the eels recovered, the volunteers set out by boat and let the eels slither to freedom.

Their new neighbourhood is the shores of Petrie Island—which sits next to the riding of the federal Minister of Environment and Climate Change.

Catherine McKenna is the member of Parliament for Ottawa Centre, encompassing part of the river’s shoreline, and her ministry handles the Species At Risk Act, which classiﬁes troubled species—beluga, snapping turtle, northern leopard frog—on a scale from “special concern” to “threatened” to “endangered.” The ministry assigns Fisheries and Oceans Canada to classify aquatic species, but the overall efﬁcacy of the Act falls under the MP’s own ﬁle. As Nadeau says, “that would be on the desk of Catherine McKenna.” (McKenna did not respond to several requests for comment about the eels in her riding).

The WWF report shows decline among half of the 903 monitored species, and these species in decline shrunk in population by 83 per cent between 1970 and 2014. Although the animals protected by the Species At Risk Act fared mildly better, they still declined by 23 per cent in the time period. Among these protected species is yet another of contention in McKenna’s own riding: snapping turtles.

“They’re absolutely mammoth,” says John Dance, one of McKenna’s constituents and former president of the Old Ottawa East Community Association. “The Ottawa River is a magniﬁcent, wonderful environment for these things.” However, Dance explains that the University of Ottawa has fences to prevent turtles from crawling onto campus to lay eggs—“which was quite annoying”­—and a strip of land set out for a condo development, Greystone Village, had slopes too steep for turtle ascension.

Dance says McKenna has supported the Community Association on other projects. But her office did not respond to requests for comment from Maclean’s about the turtle hurdles.

The Committee on the Status of Endangered Species in Canada recommends the ministry designate certain species as at risk under the federal act, but there is a backlog of species not yet designated (American eels still await designation after recommendation in 2012), and for species that do get classiﬁed, such as snapping turtles, enforcement can be inconsistent between provinces.

Fortunately, Dance says the condo developer, eQ Homes, plans to create turtle habitat on the property, including more gradual slopes. “You don’t really want to advertise to the great world where it’s going to be,” says Dance. “It’s shameful, but people have been known to hunt snapping turtles, which is absolutely barbaric.”

Snapping turtles are also threatened by roads, but protective efforts are gaining momentum. “Certainly a lot of people in eastern Ontario know the challenge of turtles crossing the road in cottage country,” says James Snider, vice-president of science, research and innovation at the World Wildlife Foundation. As with salamanders, Snider says, “you see people putting in a lot of effort to prevent collisions.”

Empathy for eels is also on the rise. As Ottawa builds its light rail train, one of the stops has been named Pimisi Transit Station, referring to the Algonquin word for “eel.” The Ottawa River contains 19 dams, and one of them, the Chaudiere Dam near downtown, wants to let these creatures pass. Since most eels don’t have access to vehicles, the dam has built an eel-accessible ladder.

CORRECTION, Nov. 6, 2017: This article previously suggested that constituent John Dance had contacted Minister Catherine McKenna about the turtle concerns himself and received no response. In fact, he had not contacted her about this issue; she did not respond to requests for comment when contacted by Maclean’s. This article also previously stated that the riding of Ottawa Centre includes Petrie Island, which is in fact east of the riding boundary.