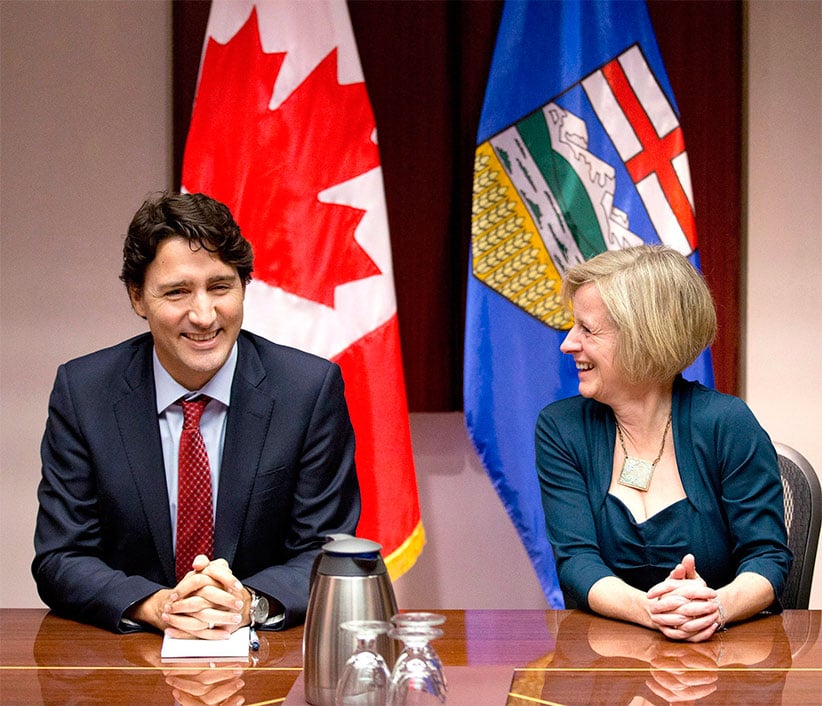 Three days before last October’s federal election, when it was abundantly clear Tom Mulcair’s NDP would thud back into third place, Alberta Premier Rachel Notley played the good party soldier and endorsed Mulcair at an Edmonton rally. It was about as abundantly clear that her political rivals would one day punish her for such brand loyalty. The Wildrose opposition believed it found the perfect time to thrust at Notley during the federal NDP’s eager flirtation with the anti-pipeline sentiment of the Leap Manifesto. Notley responded with martial-arts wisdom: rather than block, she used the opponent’s momentum to her advantage. Denounce our federal cousins’ posture against the oil sector? Gladly, because it’s the right thing to do for Alberta, she gamely replied.

At the same conference centre where she raised Mulcair’s arm last fall, Notley delivered her rile-up-the-faithful speech to the NDP convention earlier this month, and mentioned the doomed guy only briefly. On the day after New Democrats invited debate on Leap, the premier slammed the “so-called manifesto” as thoughtless and “naive.” The closest that Notley, a second-generation NDP politician, came to rapprochement between the federal party and her provincial branch was her insistence she isn’t interested in a formal divorce.

There’s no pressing need for Notley to mend these NDP fences. She no longer needs the federal NDP at this point, other than as a foil to signal she has more centrist bona fides. “The federal NDP left us; we didn’t leave the NDP,” a senior Alberta New Democrat told Maclean’s. It so happens that when prairie New Democrats seek broader political appeal and Liberals tack left to consolidate national progressive votes, they wind up sharing a lot in common.

The Alberta NDP is growing closer and closer to the Trudeau Liberals, and it’s not just because governing parties have to work together. It’s also not because the cash-starved Alberta government did what Trudeau promised to do but could not: keep the budget deficit to $10 billion (of course, that is no note of glory for a 4.2-million-person province).

But there’s a more striking place where Alberta needs Trudeau: getting a pipeline built. Without one, Alberta can’t get its oil to market in an efficient way, which will depress the price of oil sands crude even as global markets recover.

Notley’s camp has successfully exhorted Trudeau to make repeat trips to Alberta to understand and respond to the province’s pain, and is asking his cabinet to ultimately reach “yes” on at least one or both of the Energy East pipeline and the Trans Mountain pipeline expansion west. It helps that Alberta has become a model citizen of Trudeau’s climate federalism, writing into this April’s budget the type of broad-based carbon tax the NDP bashed when it was Stéphane Dion’s 2008 Green Shift. Ottawa’s methane emissions target also matched that of Alberta’s.

There are several New Democrat MPs along the B.C. coast and in Quebec who may stake out a firmer stance against pipelines in the post-Mulcair world—which would invite the Notley and Trudeau governments to jointly denounce anti-employment refuseniks, as they both did following the NDP convention. The Leap controversy has given Notley her greatest platform yet to rally Albertans behind her, and she’s thus far patiently playing soft-sell with Liberal governments in Ottawa and provinces in the pipeline path.

Apart from energy politics, Notley has linked with the Trudeau Liberals on a key social policy. While she is determinedly plowing forward on a $15 minimum wage, Alberta’s fiscal shambles have led the NDP to indefinitely defer her promise of $25-a-day child care. Instead, Alberta has chosen to complement Trudeau’s enhanced Canada Child Benefit with a new Alberta Child Benefit targeted at low-income familes. The government is boasting that the federal and provincial cheques combine to double payments for some families—a boast that lifts both governments.

There’s one notable point of tension between Notley and Trudeau: the mathematically rigid but politically and socially aggravating federal decision to exclude the Edmonton area from loosened rules for Employment Insurance claims. “We cannot continue to help Canada if Canada does not help Alberta,” Alberta Finance Minister Joe Ceci said in a post-budget speech, a line he repeated on pipelines. It’s more of a civil tiff than a feud for now, and Trudeau’s small Alberta caucus might push as hard for a resolution.

Notley will get to press Trudeau and his ministers on pipelines and EI when she addresses his cabinet on April 24 as they launch a three-day retreat in the Kananaskis region west of Calgary. There’s more worth reading into the setting of the Liberal retreat than the NDP convention, which Mulcair’s party had booked for Edmonton long before the Notley victory — and a choice Mulcair has come to regret.

Alberta’s NDP will likely heal the federal-provincial rift before the 2019 provincial election, when the traditional airlift of party volunteers and logistical support can prove key to winning again, though that senior New Democrat noted there are many airlifted operatives now working for the Notley government. By 2019, a new NDP federal leader will be in place—and if he or she is a Leaper or bids to block pipelines, Notley’s path to re-election could rely on keeping her distance.