Why the B.C. Green Party should be wary of a coalition

Andrew Weaver could be a kingmaker in British Columbia. But history and politics suggest that could be a poisoned chalice. 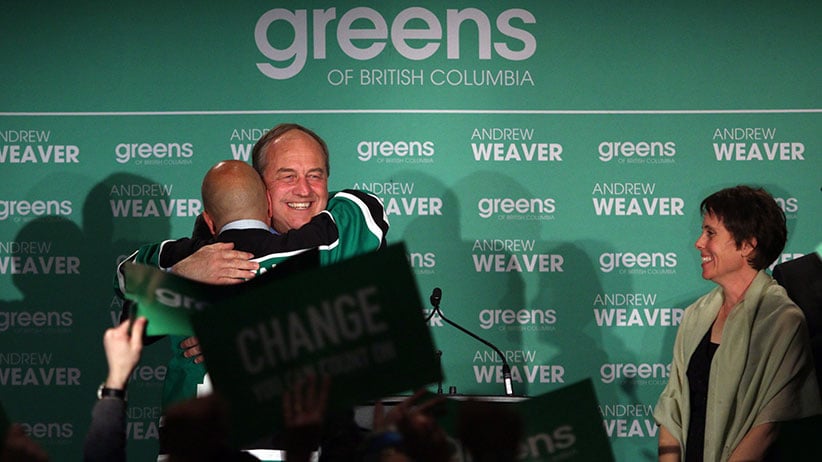 B.C. Green party leader Andrew Weaver is hugged by elected Adam Olsen, as Sonia Furstenau, (right) looks on during a speech to supporters at election headquarters at the Delta Ocean Pointe on election night in Victoria, B.C., on Wednesday, May 10, 2017.(Chad Hipolito/CP)

Should the recent provincial election results hold, Andrew Weaver will wake up on May 25 a kingmaker. Along with Saanich councillor Adam Olsen and educator-turned-activist Sonia Furstenau, they will form the most potentially powerful Green caucus in Canadian history.

If he plays his cards right, Weaver can extract out of his suitors his two principal demands. First, he can demand an end to the corporate and union cheque-cutting that puts third parties on the sidelines. Second, he can call for a serious path towards proportional representation in the next election—presumably without one of the B.C. Liberals’ infamous referendums.

However, if joining a coalition is the price to pay for these demands, Weaver should explore the history of third parties in his situation. After all, for the most part, they’re lucky just to make it out alive.

Research demonstrates that junior parties in a coalition suffer the inevitable fate of losing credibility, having their distinct identity dissolved, and seeing their leaders outmanoeuvred inside and outside smoke-filled rooms. Even when an alliance gains credit for economic growth and government effectiveness, the junior partner rarely receives the benefits. Instead, the spoils of attention and approval ratings land at the feet of the leader of the coalition, whether or not it was theirs to claim.

It gets worse. Unless minor parties manage to deliver a distinct record of policy contributions and effective government, they risk being seen as being in bed with the senior party leader, particularly when tough or unpopular compromises are made. For the following election cycle, this leads to the party’s own base feeling either betrayed—or simply disinterested—in voting for a party that now feels like the establishment. Such is the delicate balance of coalitions for a third party like the Greens, as Weaver would have to gather credit for being a leader in government and maintain his party’s outsider status, all without compromising on principle.

The most prominent example of this rise and fall is that of Nick Clegg’s Liberal Democrats, a centrist party that held the balance of power in Britain’s 2010 elections. That year, Prime Minister David Cameron’s Conservative Party failed to reach a majority, much like Christy Clark’s B.C. Liberals.

It was vital for Cameron to keep the two parties to his left from uniting to win government—at least, one that could pass legislation.* Seven years after the coalition agreement, Clegg is politically dead in British politics, and his Lib Dems have been reduced to single-digit seat numbers, down from the nearly seventy they boasted in 2010.

To blame, for one, was Clegg’s betrayal of his voter base in raising tuition fees and his compromising support of austerity economics, from which he never recovered in the polls. Further, the referendum on electoral reform that his party secured in coalition negotiations—a yes-no vote on a ranked ballot system that would favour the Lib Dems party—suffered a 32-68 defeat, led by a vicious and well-resourced Conservative campaign from within their own coalition that Clegg was far too polite in confronting. Through it all, the Liberal Democrats didn’t maintain a distinct identity, failing to acquire powerful cabinet posts and failing to put forward their own policy contributions. Even when the economy boasted robust growth throughout the coalition’s term, it was Cameron who won the spoils, while Clegg was rarely mentioned, and continued to see his poll numbers decline.

Clegg himself, to this day, complains about a system and voters that were unfair to him. In his memoir, Politics, Clegg relentlessly expresses surprise and anger for not receiving credit for the difficult compromises he made for the sake of “good government”, that if never made, would have made his party appear “unserious about power”.

There does, however, exist some cases where junior parties manage to stay afloat even after the coalition dissolves. Germany’s Greens negotiated successfully for the cabinet position of foreign minister in the early 2000s, giving them the ability to attain credit inside and outside of their base through strong stances against the Iraq invasion and the use of nuclear energy. Today, the Greens continue to be competitive in opposition, and are eager to help form government in this fall’s elections. The Scottish Liberal Democrats were strong coalition partners with Labour in the 1990s, and expanded their base by bringing to the table strong policies like free seniors care and lower tuition fees—though as calls for Scottish independence have gained salience in the last few years, the party’s No stance has made it unpopular, falling to fifth place.

As rough as coalitions can get, quitting is somehow just as punishing as staying. Research finds that voters tend to blame any party that threatens the stability of a coalition government’s existence, and they punish them in the following elections. New Zealand First (1998), Ireland’s Green Party (2011), Morocco’s Istiqlal (2013), Ukraine’s Samopomich (2016), and Croatia’s Most (2017) are all parties that have attempted to save their reputations by jumping ship from toxic alliances, and have since struggled to stay above water.

What, then, are the lessons for Andrew Weaver? The outcome could depend on which party he chooses—but either one presents danger.

In a Liberal-Green coalition, the chances of disaster are alarming. Joining an incumbent government of 16 years would initially, and increasingly, suggest that the Greens are part of the establishment, tarnishing their outsider status. It would even be offensive to the base—one of the Liberals’ major accomplishments since coming into power was to turn British Columbia into a playground for global extraction industries.

Even if the Liberals compromise on environmental issues, Clark would come nowhere near the demands the environmental base would seek, pushing them to look elsewhere for a true champion of their cause. Beyond this, it is just as difficult to imagine that the Liberals would give up their party financing regime, or commit to electoral reform. After all, the party is itself a coalition of federal Liberals and Conservatives; bringing about a proportional system would let a true conservative party thrive, and lead to a system where a broad anti-socialist coalition would be obsolete.

On the other hand, there are far fewer matters to iron out with John Horgan’s New Democrats. Despite the reports of antipathy between the two leaders, the NDP-Green base of voters largely agree on the particular policy issues of financing and proportional representation. In fact, the coalition may not even need to last so long should the leaders agree on a proportional system to promptly battle another election over. By then, the true Green and NDP base wouldn’t need to spar over whether to shut down the Site C Dam, ban coal imports, and end fracking.

Still, an Orange-Green coalition involves its own risk. Should the coalition perform well, the attention could fall to Horgan only, and a now more urban-based NDP caucus that is more comfortable supporting environmental positions could manage to squeeze out the party ideologically in time.

The legitimacy of the alliance would also be questioned by Liberal-leaning voters, as the perception that a “losers’ coalition” could alienate them from seeing the Greens as a viable option in the future. The danger of a conservative-led witch hunt against the alliance for “undemocratic” and “backroom dealing” politics should worry Weaver and the left, and any federal New Democrat around in 2008—when the Michael Ignatieff’s Liberals and Jack Layton’s NDP nearly agreed to a coalition to topple Stephen Harper’s minority—will tell them that the damage could be severe. With the Liberals, the issue is easier to manage, as the notion that the party with the most seats should govern is powerful within the electorate, and doing otherwise is bad optics. The Green base even has a streak of fiscal conservatism, and Weaver himself indicated an explicit preference for a Liberal coalition, putting to rest any notion that the Greens are somehow further to the left than the NDP.

Perhaps these reasons, based in experience and research, make a coalition the worst option for Weaver should he have the responsibility to decide in favour of one later this month. Instead, he may be best served by following the lead of past federal opposition leaders like Harper and Layton, and simply play chicken with the government of the day, extracting from them lesser spoils and scraps, while maintaining the distance the Greens need to remain the uncompromising and principled party their voters need them to be.

Politics in real life teaches us that voters reward the stubborn bastards, and punish the polite statesman. It is time for Andrew Weaver to decide which one he wants to be—and it may be the beginning, or the end, of perhaps Canada’s most influential Green movement.

Vyas Saran is a part-time political assistant for a city councillor at the City of Vancouver, a local organizer for issues of urban ethnicity, and a graduate of the University of British Columbia’s political science program.

Correction: A previous version of this post inferred that David Cameron’s Conservative Party had already held government during the 2010 elections. We regret the error.