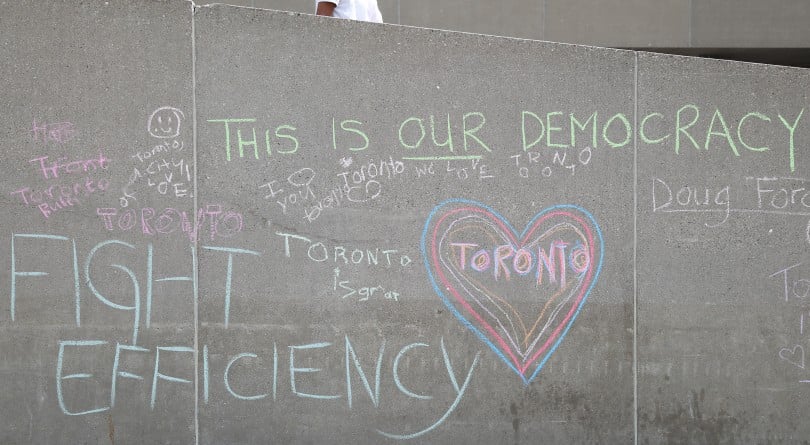 READ MORE: Ford’s law to slash Toronto council is unfair—but it should not be struck down

The unprecedented nature of the case before me

Never before has a Canadian government meddled with democracy like the Province of Ontario did when, without notice, it fundamentally altered the City of Toronto’s governance structure in the middle of the City’s election.

Arguments other than s. 2(b) of the Charter

[P]arity of voting power, though of prime importance, is not the only factor to be taken into account in ensuring effective representation. Sir John A. Macdonald in introducing the Act to re-adjust the Representation in the House of Commons, S.C. l872, c. 13, recognized this fundamental fact (House of Commons Debates, Vol. III, 4th Sess., p. 926 (June 1, 1872)):

[I]t will be found that … while the principle of population was considered to a very great extent, other considerations were also held to have weight; so that different interests, classes and localities should be fairly represented, that the principle of numbers should not be the only one. [27]

While s. 2(b) of the Charter does not include any right to any particular means of expression, where a government chooses to provide one, it must do so in a fashion that is consistent with the Constitution.[33]

It is the unique role of municipal councillors that distinguishes municipal wards from provincial and federal ridings. Boundaries that create electoral districts of 110,000 may be appropriate for higher orders of government, but because councillors have a more involved legislative role, interact more intimately with their constituents and are more involved in resolving local issues, municipal wards of such a large size would impede individual councillor’s capacity to represent their constituents.

It is my professional opinion that the unique role of councillors, as well as the public feedback received by the TWBR, and comparison with ward-size in other municipalities, demonstrates that a ward size of approximately 61,000 people provides councillors with capacity to provide their constituents with effective representation and that ward sizes of approximately 110,000 do not.

[T]he Court must first ask whether the objective the statutory restrictions seek to promote responds to pressing and substantial concerns in a democratic society, and then determine whether the means chosen by the government are proportional to that objective. The proportionality test involves three steps: the restrictive measures chosen must be rationally connected to the objective, they must constitute a minimal impairment of the violated right or freedom and there must be proportionality both between the objective and the deleterious effects of the statutory restrictions and between the deleterious and salutary effects of those restrictions.[45]

First, they [councillors in support of a 25-ward model] agree that a smaller council will lead to better decision-making at Toronto city hall, which would benefit Torontonians as a whole. They gave an example of the current 44-member council having 10-hour debates on issues that would end with the vast majority of councillors voting the same as they would have at the beginning of the debate. …

Second, they point out that it will save money …

Third, it would result in a fair vote for residents, which was the very reason Toronto itself undertook a review of its ward boundaries. The Toronto councillors I referred to earlier reminded everyone that the Supreme Court of Canada said that voter parity is a prime condition of effective representation. They gave examples of the current ward system, where there are more than 80,000 residents in one ward and 35,000 in another. They acknowledge that this voter disparity is the result of self-interest, and that the federal and provincial electoral district process is better because it is an independent process which should apply to Toronto as well. … The wards we are proposing are arrived at through an independent process.

I can tell you that I was there numerous times for a 10-hour debate on getting Mrs. Jones’ cat out of the tree. We would sit there and debate about anything for 10 hours. After 10 hours and thousands of pieces of paper going around, nothing got done. Nothing got done. And guess what. At the end of 10 hours, we all agreed to go get Mrs. Jones’s cat out of the tree. That’s a waste of time … That is why it is time to reduce the size and cost of municipal government.

Is it too late to return to the 47-ward structure?

[2] I make no ruling in relation to the provisions in Bill 5 that change the selection process for the regional chairs in York, Peel, Niagara and Muskoka from election to appointment. I recognize that Mr. Achampong included a challenge to these provisions in his application and filed a supporting affidavit from the campaign manager of a candidate in York Region. However, the Achampong application asks that Bill 5 be “stayed”, a remedy that was not requested by any other applicant and is not being granted here because it requires a very different legal analysis: see  Manitoba (A.G.) v. Metropolitan Stores Ltd. [1987] 1 S.C.R. 110. A more complete legal and evidentiary basis would be needed before this court could comfortably consider a challenge to the provisions in Bill 5 that deal with the appointment of the four regional chairs.

[5] British Columbia v. Imperial Tobacco Canada Ltd., [2005] 2 S.C.R. 473 at para. 66. Also see East York v. Ontario (Attorney General), [1997] O.J. No. 4100 at para. 12: “[C]ourts can only provide remedies for the public grievances if those grievances violate legal as opposed to political proprieties. What is politically controversial is not necessarily constitutionally impermissible.”

[7] S.O. 2006, c. 11, Sch. A., ss. 6(1) and (2). Also see s. 6 of the Toronto-Ontario Cooperation and Consultation Agreement which provides that Ontario shall consult with the City on, among other things, “[a]ny proposed change in legislation or regulation that, in Ontario’s opinion, will have a significant … impact on the City”. However, s. 14 of the same Agreement provides that a failure to abide by any of its terms does not give rise to any legal remedy.

[17] The case law is clear that the Charter cannot be subdivided into two kinds of guarantees – freedoms and rights. The freedom to do a thing, when guaranteed by the Constitution and interpreted purposively, implies a right to do it. Hence, I say “the right to freedom of expression”.  See Ontario (Attorney General) v. Fraser, [2011] 2 S.C.R. 3, at para. 67.

[41] With the exception of a minor change in one ward boundary. Leave to appeal the decision of the OMB, (now known as the Local Planning Appeal Tribunal) in Di Ciano v Toronto (City), 2017 CanLII 85757 (ON LPAT), was denied by the Divisional Court: Natale v City of Toronto, 2018 ONSC 1475.