Why the Supreme Court didn't 'free the beer'

The ruling disappointed cheap-beer lovers but it turns on some subtle technical points that could have broader ramifications, explains constitutional law expert Carissima Mathen 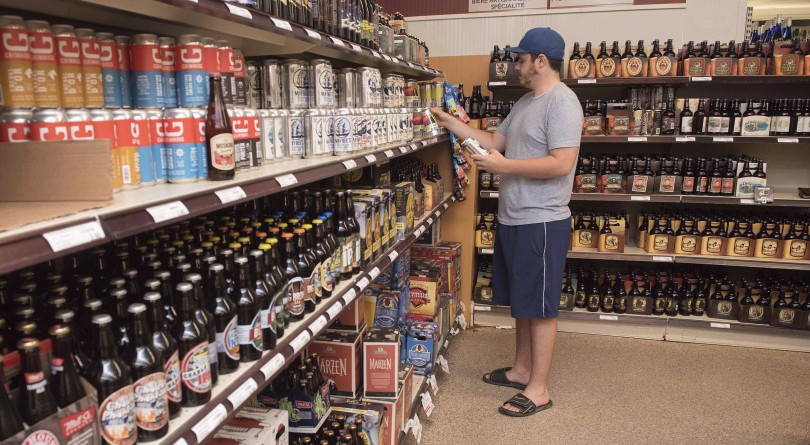 Customer Matt Oliver shops in the craft beer section of the NB Liquor store attached to the old Fredericton Railway Station in Fredericton, N.B., on Friday, June 16, 2017. A Supreme Court of Canada ruling that provinces have the right, with limits, to enact laws that restrict interprovincial commerce represents a "missed opportunity" to free up trade within Canada, industry observers say.THE CANADIAN PRESS/Stephen MacGillivray

The Supreme Court of Canada has handed down its judgement on the so-called “Free the Beer” case—and the august justices did not, in fact, insist that brews should be allowed to roam unfettered across the nation. Instead, the court ruled unanimously that provinces have the right to restrict the flow of goods over their borders.

The case was sparked by a 2012 shopping trip in which Gerard Comeau, a retiree from Tracadie, N.B., picked up several cases of beer in Quebec and brought them home. He was stopped by the RCMP and fined $292.50, which he opted to fight in court, arguing that it was unconstitutional. A New Brunswick provincial judge ruled in his favour in 2016, but the province’s attorney general appealed, and the case ultimately landed at the feet of the Supreme Court.

RELATED: In its ‘free-the-beer’ ruling, the Supreme Court reveals its contradictions

Thursday’s decision disappointed cheap-beer lovers (Comeau’s haul included two cases of Miller Genuine Draft, three cases of Budweiser and two of Coors Light), but it turns on some subtle technical points that could have broader ramifications. As Carissima Mathen, a professor and constitutional law expert at the University of Ottawa, explains, Alberta and British Columbia probably want to pay attention.

A: It upholds the New Brunswick law that made it an offence to import more than a prescribed amount of alcohol from other provinces. And it articulates a certain test for determining whether a provincial law violates Section 121 of the Constitution Act, 1867, which many people thought should be read as essentially guaranteeing free trade among the provinces and therefore not permitting any barriers on the movement of goods across provincial borders.

Q: What does Section 121 say and why was it central to this decision?

A: Section 121 is part of a number of sections of the Constitution enacted when Canada became a federation in 1867. It says, ‘All articles of growth, produce or manufacture of any one of the provinces shall be admitted free into each of the other provinces.’ At the time of Confederation, you had separate colonies—really like their own states—with customs and excise laws. An important goal of Confederation was economic integration. So part of that would be transferring the powers of customs and excise from those colonies to the new federal government.

That hasn’t been invoked in many cases, but the cases in which it was invoked suggested that it only applied perhaps to actual tariffs. So if you bought a shirt in Quebec and brought it over to Ontario and the Ontario government tried to tax that as an instance of customs, that would clearly run afoul of Section 121. But the provinces have all kinds of other rules in relation to the control of goods that, while they don’t impose actual taxes, you could argue have the effect of preventing those goods from crossing freely from one province to another.

Q: So the Supreme Court decided the trial judge had made a mistake? On what basis?

A: The earlier trial court judgment acknowledged that there was this much earlier decision called Gold Seal, where the Supreme Court  took a narrower understanding of Section 121. The trial court judge relied on a historian who was retained by Mr. Comeau and provided evidence about what the framers of the 1867 constitution actually meant. The trial judge determined that he had this new evidence that indicated a better read of the intention of Section 121, and on that basis, he said that this earlier Supreme Court decision was wrong.

The Supreme Court today said it wasn’t in his power to do that, because as a lower court judge, he’s bound by higher court decisions, except in very rare cases, and this wasn’t one such case. They essentially chastised the trial judge for going beyond his authority, in terms of feeling free to disregard this older decision.

Q: How big were the potential implications of opening up Section 121 if this decision had gone a different way?

A: Very big. The broader interpretation of Section 121, the court said, is significant: “If this interpretation is correct, federal and provincial legislative schemes of many types—environmental, health, commercial, social—may be invalid.” There are lots of provincial regimes that restrict the flow of things from one province to another. It would essentially mandate unrestricted free trade among the provinces with no ability, in individual provinces, to enact any system of preferences.

Q: How does the Supreme Court tend to react to a circumstance like that, where there are massive implications?

A: Particularly where it involves an issue of division of powers and economic regulation—where it doesn’t involve specific Charter rights of individual citizens—the Court is generally deferential. It really doesn’t like to intervene in cases where you have all of those government actors urging a particular interpretation of the Constitution Act, 1867.

When governments have operated under a particular set of beliefs or presumptions for many, many decades, the court doesn’t tend to see it from the point of view of the individual citizen who just wants to get cheap beer. The court is looking at it as a government relations question. That unfortunately means that the individual citizen’s concerns are not given as much weight, and the Supreme Court leaves it to those governments to make decisions that it believes are in the best interest of the citizens. And the citizens, of course, have the ultimate ability to register their displeasure by, for example, voting in different people.

READ: Are we seeing a craft brewery bubble, or just a frothy boom?

Q. So if you’re a citizen who’s annoyed about this decision today, it’s not the court’s fault and there are other mechanisms for you to try to enact some change?

A:You should agitate for freer trade. And certainly, there’s nothing in the Constitution that prevents that.

Q: Everyone tagged this decision “Free the Beer” because that was an irresistible way to frame it, but it sounds like it really goes to the heart of federalism.

A: It does, but in part it does because you’ve had this state of affairs that has been the status quo for a long time. I don’t think this decision should be seen as a huge surprise. People are, for example, taking shots at the court for drawing a distinction between a law that has as its primary purpose impeding interprovincial trade, and a law that has as an incidental effect impeding interprovincial trade. That’s a distinction that the Court has used in division of powers cases for 75 years. So we have these people that are all of a sudden experts on the division of powers, who are just amazed that the court is using this kind of language. It’s not uncontroversial, but this interpretation is well within the boundaries of ordinary division of powers case law.

Q: Can you explain that distinction, because I do think that word “impede” is something a lot of laypeople will pick up on and say, “Hey, I want cheap beer from another province, of course this is impeding me.”

A: The test that the court put forward for Section 121 is a two-part test. First of all, does it impose a barrier on the flow of a good from one province to another? In this case, the court had no trouble finding that the New Brunswick liquor law did impose that barrier.

The second part of the test, though, is that you have to establish that the province imposed that law primarily to impede that trade, as opposed to imposing it as part of some other government purpose. I think because this was in respect to provinces enacting monopolies over the consumption of alcohol—which are unpopular, but they do that for a variety of reasons, including health and safety—the court found that the law was not put in place primarily to block interprovincial trade. The law also makes it an offence to possess quantities of alcohol above a certain level that you get from anywhere other than the New Brunswick Liquor Commission, even if it’s from other sources in New Brunswick. So it’s not just directed at the goods crossing the provincial lines.

The basic philosophy underneath this is that the division of powers gives authority to the federal and provincial governments to do all kinds of things which in their application will overlap with each other. That doesn’t mean the law automatically is unconstitutional because it’s trenching on something that belongs to another government. That’s why we’ve had for many, many years this idea that if the law just incidentally affects another order of government, we’re not just going to strike it down. You’re never going to get that perfect separation.

Q: What potential implications can you see from this decision, particularly right now when we have a lot of tension over interprovincial trade in Canada?

A: One of the things the court makes clear is that when it’s determining issues of federalism, it’s really looking at what does the Constitution permit and what does it prohibit, and they’re not looking at the underlying policy—whether it’s good policy, bad policy, whether it’s popular, unpopular. That’s a question for the various governments to resolve with their own citizens.

That’s going to be important potentially, because in some of the disputes right now, we have these broader undercurrents of concern over the environment or concern over the interest of other groups.

Q. You’re talking about the pipeline dispute between Alberta and B.C. there?

A: Albert and B.C., also other constitutionally protected parties, like indigenous persons. But in division of powers terms, that stuff really doesn’t matter and it shouldn’t matter because that’s not what the court is doing.

The other thing is that the court does say that where a province is found to be acting with the purpose of impeding interprovincial trade, if there’s evidence that was its primary goal—let’s say if it’s made certain statements in the public realm—then the court is not going to be too impressed with that.

I think both B.C. and Alberta probably want to take this as a bit of a cautionary note that they’re not going to be able to rely on their own jurisdiction under the Constitution to do things that will either interfere in federal jurisdiction or will interrupt the free flow of natural resources that is normally supposed to occur without discrimination between provinces. I think both of them might want to take this as a sign that the court is very conscious of its role as being an arbiter of federalism and playing that umpire, and not allowing a province—any actor—to kind of game its position under the constitution to achieve other policy goals.

Q. Is it rare for a decision to be unsigned, as this one is? Why does the Court do that?

A. It’s not rare. It generally happens in important, sometimes controversial, cases. Legally, it doesn’t make a difference, but it’s considered symbolically a higher form of unanimity. The court is speaking as one voice and it’s not attributing its opinion to any single judge.