Why there's vacancy in Alison Redford's deluxe apartment in the sky

A toxic symbol of excess, the lavish home-to-be for Alison Redford is now a politically radioactive fallout zone 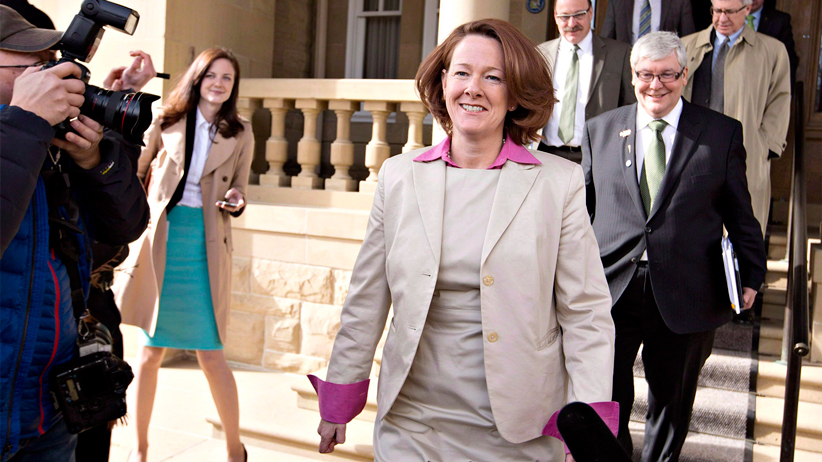 EDMONTON — A penthouse suite that was dubbed the sky palace as it came to symbolize what was seen as the former Alberta government’s sense of entitlement is open for business.

Construction on the penthouse atop the Federal Building in Edmonton just recently finished and the suite has been available for meetings since Jan. 1.

The 11th-floor suite is a design mishmash: half home, half office, equal parts opulent and shabby. A washer and dryer still wrapped in plastic sit just off the main conference room.

It reflects a political trajectory from lavish home-to-be for Redford to toxic symbol of government excess to its latest incarnation as a politically radioactive fallout zone.

“It has continued as a physical representation of how the PCs squandered our revenue when times were good,” said Oates.

“Our government doesn’t want to continue that story.”

Documents about the suite were released in March 2014 — just days after Redford quit the top job ahead of a caucus revolt over excessive travel spending on herself, her family and friends.

Spending on the suite was cut off by her Tory successors as public outrage grew over the taxpayer-funded project that had already racked up at least $240,000 in 3D design drawings, colour boards, room dividers, blueprints and construction.

The penthouse was originally intended to be a meeting room, part of a $400-million makeover of the historic Tyndall stone building, which now houses some government officials, opposition legislature members and government backbenchers.

But sometime in 2012, officials in Redford’s office took over and began to remodel the top floor. It was to be done in the style of the luxury Hay Adams hotel in Washington, D.C., with its European linens, marble bathrooms, brass fixtures and views of the White House.

The “premier’s den” was to be for Redford and her daughter. There were bedrooms, bathrooms, a dining room, lounge, fireplace, powder room, butler’s pantry, walk-in closet and room-by-room temperature controls.

The structure itself is elegant: wood flooring, carved wooden posts and floor-to-ceiling exterior windows. Doors open onto a patio with panoramic views of the city.

Plastic owls with slowly rotating heads sit on ledges and rooftops to scare away pigeons.

But almost all the walls are bare. There’s the odd potted plant.

The main conference room, where the living room would have been, has a table that sits 14.

A phone sits on the floor.

In the adjacent room, there is a sink, a counter and an empty fridge.

A second, smaller bedroom turned conference area, has an oval table, eight chairs on rollers, a plastic wastebasket and a curtain over the clothes closet.

The third room, what would have been the largest bedroom, is the only one with some vibrancy. There are comfortable red, high-back chairs around a coffee table. There’s artwork on the walls.

Along one wall, there is an off-white two-seater couch and two ornate end tables rescued from Redford’s old office.

Two floor lamps are the only purchases for the suite. Everything else, say government officials, was begged and borrowed from government storage or surplus.

Redford, now working for the Conference Board of Canada, has never commented in detail on her failed administration except to say “mistakes were made.”

Oates said one of the reasons the NDP caucus doesn’t use the penthouse is that there are better options, including state-of-the-art meeting rooms just one floor down.

“Those (sky palace) bedrooms are beautiful bedrooms, but not the best meeting spaces.”