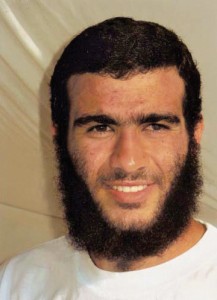 TORONTO — The widow of a U.S. special forces soldier killed in Afghanistan and an American soldier blinded by a grenade are suing Canada’s Omar Khadr for close to $50 million, The Canadian Press has learned.

In the lawsuit filed Thursday in Utah, Tabitha Speer and Sgt. Layne Morris allege Khadr, then 15, was responsible for the death of Sgt. Christopher Speer and Morris’s injuries in July 2002.

The factual basis for the suit, according to their lawyer, is Khadr’s guilty plea to five war crimes before a U.S. military commission in Guantanamo Bay in October 2010 that saw him sentenced to a further eight years in prison.

The plea deal included a stipulation of facts in which Khadr, now 27, admitted to murder and attempted murder in violation of the rule of war, and three other war crimes.

“We took his own very words,” lawyer Don Winder said in an interview from Salt Lake City.

“We do not think there is any basis for his denial.”

The Toronto-born Khadr, currently incarcerated in the Bowden Institution in Innisfail, Alta., has since said he only pleaded guilty to get out of Guantanamo Bay and be returned to Canada.

Reached in Edmonton, Khadr’s lawyer said his client had yet to be served with the suit nor has he ever had an opportunity to defend himself in a civil proceeding.

“They have no evidence,” Dennis Edney said in an interview.

“They are relying upon the tainted, internationally decried Guantanamo process.”

The suit filed in Utah district court alleges Morris suffered severe and permanent injuries as a result of Khadr’s actions.

“Tabitha Speer has suffered the loss of financial support, loss of society, comfort, care, protection, marital relations, affection and companionship of her husband,” according to the suit obtained by The Canadian Press.

Although Khadr apologized directly to Speer when he was sentenced at Guantanamo, Winder said that wasn’t enough.

“Most of us understand that we should not be terrorists and murder and maim other people,” Winder said.

“He has not recognized the damage he has done.”

Winder said Morris pressed for the lawsuit, which denounces Khadr as a terrorist, and the idea is to hold him to account for his actions.

The suit asks for US$2.5 million for Morris’s injuries, US$38 million for Speer’s wrongful death and another US$2 million for his suffering before he died.

The suit also asks for treble the damages awarded as punitive damages, meaning the final amount, if successful, could exceed more than US$130 million.

Winder said provisions under Canadian anti-terrorism laws would make a judgment against Khadr enforceable in Canada.

“It made it something we could easily do here,” he said.

He said he hoped the Utah court would issue a summary judgment in four or five months.