Despite the end of the alert, officials fear high temperatures and a chance for lightning could bring an uptick in fire activity next week 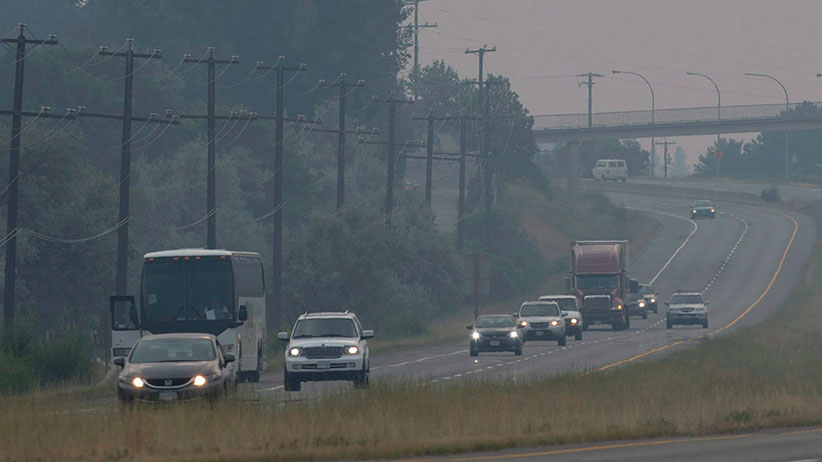 Cars and trucks drive though the thick smoke caused by wildfires just outside of Kamloops, B.C., on Sunday, July 16, 2017. Over a hundred wildfires are burning throughout British Columbia, forcing thousands of residents to be evacuated or placed on evacuation alert. (Jonathan Hayward/CP)

100 MILE HOUSE, B.C. – An area of British Columbia’s South Cariboo region is no longer under an evacuation alert as the wildfire threat subsides, but officials fear high temperatures and a chance for lightning could bring an uptick in fire activity next week.

The Cariboo Regional District announced Saturday that the evacuation alert for 100 Mile House and surrounding communities was rescinded.

Officials warn that an alert or order forcing people from their homes yet again is still a possibility.

Environment Canada forecasts rising temperatures up to and above 30 degrees Celsius for the southern Interior in the coming week, and the BC Wildfire Service has said the forests are much more dry than normal.

Chief fire information officer Kevin Skrepnek said there is no rain in the foreseeable future for the southern parts of the province and there’s a chance a sub-tropic weather system could bring lightning later in the week.

“To have that lightning arrive on Thursday, which is what the forecast is indicating right now, could make for a very dangerous situation out there in terms of new fires starting,” he said.

Chris Duffy with Emergency Management BC said that roughly 3,700 people remain displaced by the remaining 18 evacuation orders in the province, down significantly from the tens of thousands that were forced from their homes earlier this month.

Crews are still responding to the 148 fires burning across the province, an effort Skrepnek said has become more challenging in some areas with people returning home.

“We’ve had multiple incidents with folks accessing areas where we’re in the midst of fighting fire,” he said.

RELATED: B.C. wildfires: The race to save farm animals from the flames

Issues include people using off road vehicles in areas that crews are working and some people are boating on lakes that helicopters and water skimming aircraft must access.

“I don’t think they’re intentionally trying to impede operations, and I think what it could be in many situations is just ignorance of how large these fires are and how expansive our operations have become,” he said, adding some fires are more than 1,000 square kilometres in size.

Skrepnek said the wildfire service has the authority to close off areas near fire sites if these problems persist.

Incidents of vandalism and stolen equipment such as water pumps and hoses have also been an issue and Skrepnek said the wildfire service is working with RCMP to resolve the problem.

RCMP Staff Sgt. Annie Linteau said no arrests have been made for interfering with wildfire operations, although some fines have been issued to people caught breaking campfire bans and other restrictions.

The province has seen 810 fires this season, costing the wildfire service $166.7 million since April 1.