Wildfires force about 5,000 people to evacuate homes in northern Alberta 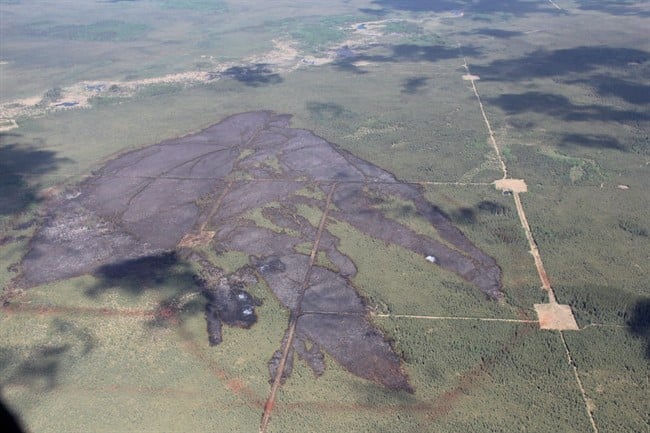 A wildfire burning out of control 22 kilometres east of Slave Lake, Alta. is shown in an Alberta government handout photo.Wildfires have forced about 4,000 people from their homes in north- central Alberta but officials don’t believe any houses have been lost. (Alberta Wildfire Info/CP)

About 5,000 people remained out from their homes Tuesday as wildfires continued to burn in north-central Alberta.

The evacuees included people from Wabasca, the Bigstone Cree First Nation and two municipal districts in a rural area north of Edmonton.

Reeve Murray Kerik of the Municipal District of Lesser Slave River, which was under a local state of emergency, said the weather will help determine when people will be able to return home.

“A lot will depend on the fire behaviour this afternoon,” Kerik said. “The hottest and the worst part of the day is between 3 to 5 o’clock, when we get the most heat built up and we have the winds come up.

“We will move them back as soon as we can, but we don’t want to risk human life.”

The MD of Opportunity and the Bigstone reserve were also under states of local emergency, which allow local authorities to order evacuations and control travel in affected areas.

There were 65 fires burning in the province; 19 were considered to be out of control.

He said the fires were not growing, but that could change depending on the temperature, wind and humidity.

“We don’t know what the day is going to bring,” Driscoll said.

“Quite likely, we’re going to get some more lightning tonight. And we’re going to hope that it comes with some rain but likely it’s not going to come with enough to make a difference.”

Alberta had more than 630 firefighters and 70 helicopters working directly on the wildfires. They were being supported by fire crews from Ontario and water bombers from Quebec.

The government issued a province-wide fire ban on Monday due to extremely hot and dry conditions, the first since 2011.

The wildfires have also prompted more evacuations from oilsands sites south of Fort McMurray, Alta., adding to the list of operators to be affected by out-of-control blazes in northeastern region of the province.

MEG Energy has bused about 900 workers out of its operations in the Christina Lake area, with about 80 staying behind for essential functions, spokesman Brad Bellows said Tuesday.

The facility was undergoing some scheduled maintenance work so there were more than twice as many people on site than would be there ordinarily.

Affected workers have either returned to their homes in Edmonton or are being put up in hotels there while the company awaits word from provincial authorities that it’s safe to return.

“The movement of staff off-site was purely a precautionary measure,” said Bellows. “There was no imminent danger to our people, most importantly, or to our facilities.”

Meanwhile, Statoil Canada has removed more than 150 non-essential employees and contractors from its Leismer project south of Fort McMurray.

About 30 workers are staying behind to keep the around 20,000-barrel-a-day facility running, said spokesman Peter Symons.

“At this point, we haven’t had any interruption in our oilsands production and we’re just keeping a really close eye on the weather,” he said.

Narrows Lake doesn’t produce any oil yet and construction work on it has stopped because of low crude prices. A work camp was being completed at the time of the evacuation.

Two workers have also been taken out of Cenovus’ Birch Mountain natural gas plant by helicopter.

Its Foster Creek project remains shut down after a precautionary evacuation of 1,800 workers on Saturday. The fire is about 25 kilometres from the site, so for now the infrastructure at Foster Creek is not under threat.

Foster Creek, which is jointly-owned with ConocoPhillips, normally produces 135,000 barrels a day.

Canadian Natural Resources (TSX:CNQ) also evacuated all 250 workers on Saturday from its 80,000-barrel a day Primrose facility and reduced production at its Kirby South operations by 18,000 barrels a day to 12,000 barrels a day.

So far, it’s business as usual at Imperial Oil Ltd.’s (TSX:IMO) Cold Lake oilsands project northeast of Edmonton, which averaged about 152,000 barrels a day of bitumen production in the first quarter.