Will turkeys overrun humans in this B.C. town?

If Edgewater, B.C. locals don't change their habits, it’s only a matter of time until they're outnumbered by wild turkeys 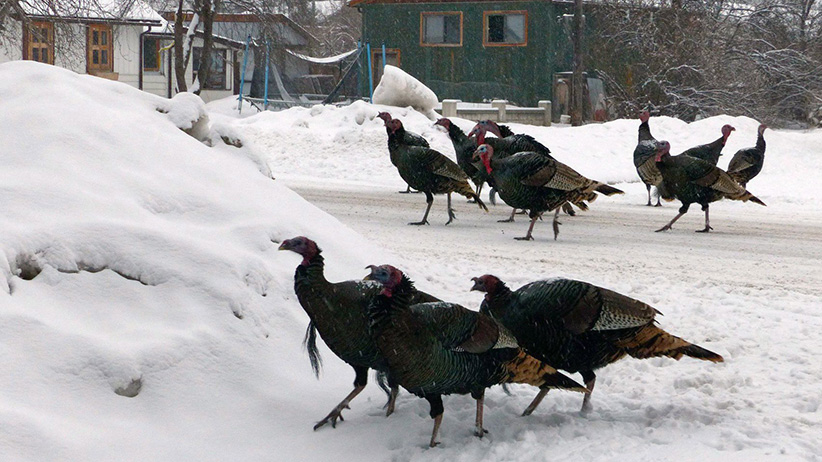 Wild turkeys are shown on a road in this handout image from Edgewater, B.C. The turkeys are creating a flutter in southeastern British Columbia as growing flocks of the birds spend the winter in the region, damaging trees and properties. (Val Holmes/CP)

According to the most recent census, the human population of Edgewater, B.C., is 437—and holding relatively steady. According to locals, however, the wild turkey population is about 100—and growing out of control.

The turkeys are destroying property and creating traffic hazards, while “the defecation from the birds as they fly back and forth is really astonishing,” says Gerry Wilkie, the local elected official. “Just the sheer volume of poop.” Yet there’s no consensus among locals whether a problem even exists, as some folks have taken a liking to feeding them despite officials warning against it. And so the fowl come back every fall.

Wild turkeys aren’t native to B.C. They were introduced as a species in the 1960s to the Creston Valley area, near its border with Idaho, in hopes of growing a population for hunting. Twenty years later, according to the hunting and fishing magazine Outdoor Canada, the provincial government relocated the turkeys into the East Kootenays. As their population started to expand, the turkeys slowly made their way north to Edgewater and its neighbouring communities.

Tourists visiting the Village of Radium Hot Springs this summer might have noticed two flocks of about 25 turkeys wandering around, all of whom knew exactly where to find sustenance. Many locals have bird feeders on their properties, so if it’s a windy day or other birds kick some feed to the ground, the wild turkeys know where to go. “They’ll do a daily route and go under every bird feeder in town and pick up what falls,” says Mayor Clara Reinhardt. And it’s not just bird feed, she adds. “When you start having two flocks of turkeys walk through your yard twice a day, they eat all your fruit or roost in your trees and break your branches.” She figures it’s only a matter of time until the birds find the community garden, where they should have no problem fluttering over the eight-foot fence.

In early January, Radium Hot Springs posted a public service announcement on its website explaining all the problems wild turkeys can pose, be it preying on at-risk species in the region (like snakes) or competing for habitat with grouse that are native to the region. The solution, however, is relatively simple: don’t feed them.

In fact, this past year Radium officials were ready to ticket one local who persisted in feeding the wild turkeys, until the village discovered their bylaw against feeding wild animals applied only to mammals, not birds. “We’ve recently added a revision to include problematic wild birds,” Reinhardt says. The bylaw won’t matter much over the winter, as the turkeys show up in the summer but leave every fall. Reinhardt isn’t sure where they go, though she wonders if they all move to Edgewater, where turkeys show up in numbers every October.

The dozen or so turkeys that showed up in Edgewater three years ago were at first greeted as a novelty. For some, they probably still are. “Most people who live in this village probably see and kind of a laugh,” says local resident Mark Holmes. He and his wife felt the same way. That is, until nearly the entire flock, with some birds as tall as four feet with the same measure in wingspan, decided that the Douglas Fir trees on their property were the perfect place to roost at night. “If you get six or seven of them on a branch, they’ll snap it off,” he says. “They inadvertently do a tremendous amount of damage to my trees that at least one of them now is 70 per cent denuded at this point.”

Holmes tried various tactics to get rid of them, from chasing them to shining a floodlight at them at night to disrupt their sleep. Neither seemed to bother them. Next came the bear bangers, which make a fire cracker-like sound enough to scare wild bears away. “It goes off inches from their face and they don’t even blink,” he says.

Holmes can’t take out his hunting rifle and kill them, as Edgewater has laws prohibiting shooting within the community. Nor can the officials gather them up and drive them somewhere else, as “provincial policy does not allow translocation of non-native species such as turkeys,” the B.C. Ministry of Forests, Lands, Natural Resource Operations and Rural Development tells Maclean’s via email.

Fortunately for Edgewater, the turkeys fly off every spring, meaning local crops are largely unaffected over the warmer months. But if people continue to feed the birds, it’s predicted that more and more will be back each year. And as they become habituated to humans, Wilkie worries they could start to become aggressive. In Edgewater, after all, it’s only a matter of time until there are more wild turkeys than humans.