One year ago, Maclean's dubbed Winnipeg arguably 'Canada's most racist city.' It's fast becoming a capital of reconciliation. 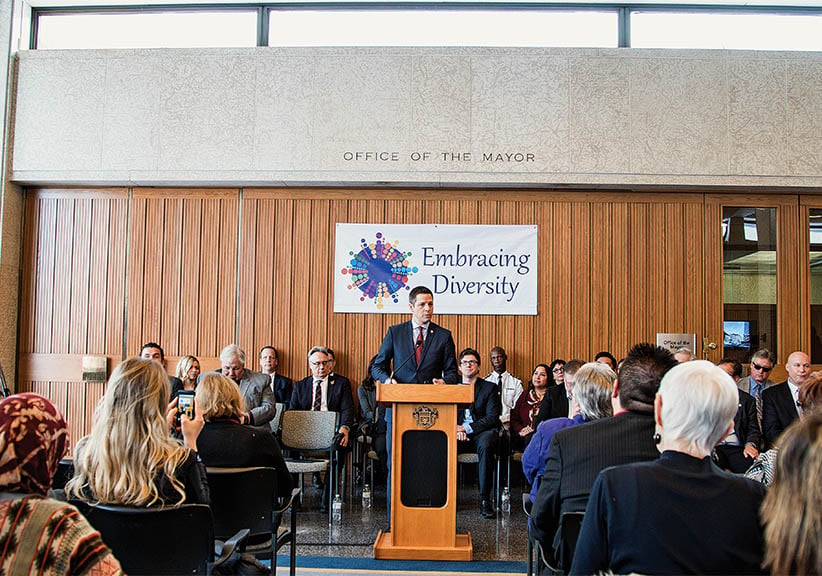 Mayor Brian Bowman marks the one-year anniversary of Winnipeg’s designation as Canada’s most racist city. Bowman announced that 2016 would be a year of reconciliation for the city. (Photograph by Sam Karney)

Last January, one day after the publication of a Maclean’s cover story on racism in Winnipeg, Lenard Monkman headed to Meet Me at the Belltower, an anti-violence rally held weekly at the Selkirk Avenue belltower, in the heart of Winnipeg’s troubled North End. It was a first step on a journey that’s taken the 30-year-old from a dreary job in flooring to the forefront of a grassroots movement that is transforming the Manitoba capital.

“I went to the belltower because I felt I had something to say about racism in Winnipeg—about the urban Indigenous experience,” he recalls. “It was uncomfortable at first; but it was also about me trying to change my life around.”

In the months since, Monkman, a member of the Lake Manitoba First Nation, launched a program called “100 Basketballs,” to provide 100 North End children with a basketball, basketball shoes and basketball shorts; its popularity prompted the Manitoba government to announce the creation of a new, brightly lit North End basketball court, and Winnipeg Police Service Chief Devon Clunis to captain a team of officers for a hard-fought game against community youth, to drum up donations.

Monkman is also among the young editorial team that launched Red Rising, a vibrant, new magazine by and for Indigenous youth; the launch of its second issue this week will be celebrated by a free performance by Indigenous musicians Leonard Sumner and Ali Fontaine. And Monkman was part of the organizing committee behind a fall, grassroots summit on racism at the Forks, and the “13 Fires” conversation series, which aims to strengthen communication between Winnipeg communities. Broadly, “the work focuses on breaking down stereotypes and improving understanding,” says Monkman. “It’s that us-versus-them mentality that’s really broken down the relationship between Indigenous and non-Indigenous people in this country.”

With his flooring days now behind him, Monkman is studying at the University of Winnipeg, with plans to earn an M.A. at the University of Victoria’s renowned Indigenous governance program. “Last year, I never thought I was going to be able to go to university,” he says. “This year I think writing a book may be possible some day.”

Monkman was among many in the city closely watching the mayor’s two-hour press conference at City Hall last Friday. It was called one year ago, to coincide with the anniversary of the Maclean’s article’s Jan. 22 publication. But rather than pat himself on the back for the difficult work of the past 12 months, Bowman—who promised in vain he wouldn’t get emotional as he did last year, when he broke down—instead announced a redoubling of efforts toward “building bridges, strengthening relationships and embracing diversity.”

Declaring 2016 the “Year of Reconciliation” for Winnipeg, he announced a host of new initiatives aimed at combatting racism, including mandatory training for all city staff on the impact of residential schools, a promise to visit every Winnipeg high school to address diversity, and a program to foster public engagement in reconciliation. It is a kind of commitment to the issue of racism never before seen by a civic leader in Winnipeg, and one that civic leaders say has propelled Winnipeg to the forefront of the issue in Canada, as other cities begin the tough work of reconciliation.

“On that day [a year ago], this community chose to come together to recognize the existence of racism, and that we needed to work together to better address it,” Bowman said. “On that day, we chose unity over division. We responded to the Maclean’s article with honesty and humility. We knew we could not, and cannot, mend the profound wrongs and injustices of generations and centuries in one year, with a single summit or press conference. But I remain committed to the journey.” 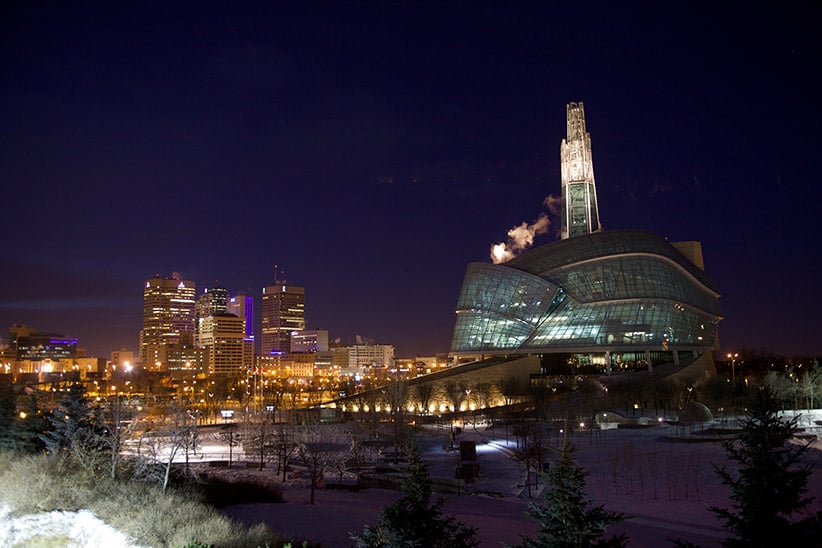 Numerous Indigenous speakers and community leaders at the press conference announced forthcoming projects, like St. John’s High School student Sylas Parenteau, who talked about an upcoming march for diversity by 3,000 Winnipeg School Division students, continuing the anti-racism work the division undertook in the last year. Far from a top-down effort, “we’ve been able to drive this conversation down to the individual level, where it really needs to occur,” Bowman said.

Bowman addressed a packed, second-floor foyer at City Hall. Seated with him were many of the same people who stood shoulder-to-shoulder with him last year. Michael Champagne, of Aboriginal Youth Opportunities, and founder of Meet Me at the Belltower, led a smudge; a local imam led a prayer. Proceedings were briefly interrupted by a Somali mother who told media she hasn’t seen her children in the six years since they were allegedly taken by Winnipeg Child and Family Services (CFS). Rather than being promptly frogmarched out by security, she was embraced by Ojibwe elder Randi Gage, and promised an audience with Bowman; Clunis, the police chief, wrapped an arm around her husband’s shoulder. Justice Murray Sinclair, head of the Truth and Reconciliation

Commission, addressed the controversy, acknowledging the “validity” of her concerns, which mirror those many Indigenous people feel toward CFS. “They are an example of what this day is all about—the sense of injustice so many feel about the way that they are treated by society, and their inability to be able to express themselves in a full way, to be able to achieve their ambitions in being part of this nation.”

There were critics of last year’s article in the room at City Hall, too; it remains deeply controversial in the city. But some, like radio host Charles Adler, who found the thrust of it “incredibly insulting,” admitted it ultimately “forced all of us to look into our souls,” and see the problem for what it was: “a human dignity issue,” threatening the future of the city. Instead of racism, Adler, who hosted Bowman’s press conference last week, believes Winnipeg will one day become known as “the capital of reconciliation.”

“At the very foundation of attacking racism there are two things we need to think about,” said Sinclair, a member of Bowman’s new Indigenous advisory circle: “What is it that our leaders are saying? And what is it that our leaders are doing? And to that, I say: Look around. Look at what our mayor has done. Look at the fact that our mayor has stood up, has embraced the ambition of trying to address it in a way that all people of this city are comfortable with who they are, are comfortable with a sense of their future, of who they can be in this society.”

Related: A Winnipeg art project stares racism in the face

More than anything, it’s the “tone and mindset” that’s changed in the last year, says Grand Chief Derek Nepinak of the Assembly of Manitoba Chiefs. “There’s more friendliness, more people meeting each other’s eyes, taking the time to say hello, more speaking out [against racism],” says activist Althea Guiboche, founder of the charity Got Bannock?, who was featured in last year’s story; this month, she announced her candidacy for the provincial Liberals in the North End riding of Point Douglas in Manitoba’s spring election.

Champagne, who was also profiled in the story, believes people “began to have a much more blunt conversation about the racism we see every day. It felt like before, it was less okay. But after the article it was much more acceptable for people to bring it up, to name it and work collaboratively to create some kind of response.”

The next stage, according to Treaty Commissioner Jamie Wilson, a member of the mayor’s Indigenous advisory circle, involves quantifying progress: “It’s not just, ‘Here’s how much money we’ve spent’; it’s going to be looking at what difference has this made in our community,” then using those measurements to figure out where to go next.

“I am incredibly proud of how we responded,” says Bowman. “I’m proud of Winnipeg.”

For Monkman, who was criminally active as a youth, the process of reconciliation is real and tangible: “Last year I thought there was a wall built up between me and non-Indigenous people we’d never overcome. Like a lot of people, I’ve never gone outside that circle; all my friends have always been Indigenous. But it’s different now. I never realized how much people in the wider community wanted to see change. How ready people are for it.”