With the Meng Wanzhou decision, politicized process lives only in China's imagination

The judge ruled against the Huawei exec, but it was no slam dunk. If only Michael Spavor and Michael Kovrig had access to such an impartial hearing. 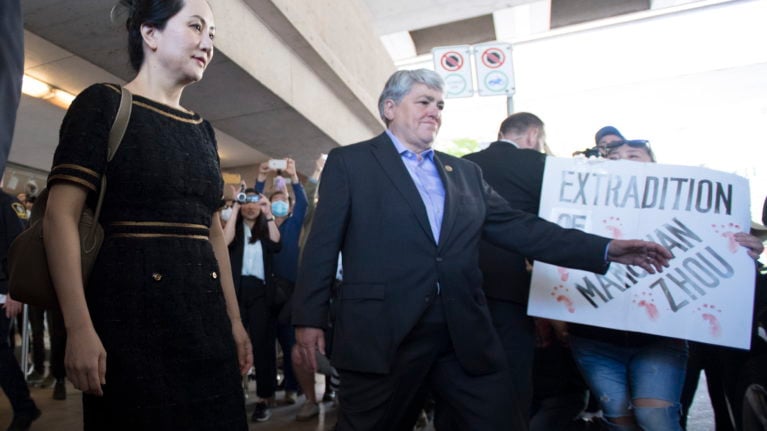 Meng leaves B.C Supreme Court after a justice dismissed her application to be discharged from extradition proceedings. (Jonathan Hayward/CP)

On the courthouse steps, protestors flashed signs and chanted about the plight of Uyghurs in China, imprisoned Canadians Michael Spavor and Michael Kovrig, Chinese Communist Party influence and Huawei’s bid to help build the Canadian 5G system. Some signs even mentioned the extradition of Meng Wanzhou, the actual topic at play on Wednesday inside the B.C. Supreme Court.

Despite the outsized weight and impact of Meng’s continued detention and pending U.S. fraud charges, Associate Chief Justice Heather Holmes was tasked with tuning all that out and ruling on whether the offences with which the Huawei executive was criminally charged south of the border would merit charges in Canada, as well. She determined that such so-called “double criminality” indeed exists in this case.

So the Meng Wanzhou show will proceed apace: the geopolitics; the threats and retaliatory measures from an outraged Beijing; the international media circus and, of course, Canada’s unsexy extradition process—the juridical centre from which all other matters spiral out.

The rejection of Meng’s bid to get the extradition thrown out means she remains on partial house arrest at her mansion in posh Shaughnessy, with ankle monitor and bodyguards. Its consequences are more dire, of course, for Spavor and Kovrig, jailed in China two weeks after Meng’s December 2018 arrest, and still held in solitary confinement without charges, or access to either lawyers or family. China’s reliance on tit-for-tat recrimination is unlikely to end anytime soon: the dubious sanctions on Canada’s canola exporters will doubtless remain in place, plus whatever further reprisals Beijing deems fit. What the Canadian and U.S. governments see as an independent judge’s decision on a matter of extradition law, the authoritarian state sees as a brazen provocation by a U.S. puppet state.

From the vantage point of China’s government-run Global Times, the failure to rule in Meng’s favour has reduced Canada to a “pathetic clown and a scapegoat in the fight between China and the U.S.” It pushes Canada-China relations to “worst-ever” status, and will further harm bilateral trade, the tabloid goes on to say. That hyperbole is part of a recent ratcheting-up of rhetoric from Chinese government officials, including the embassy’s statement today: “Immediately release Ms. Meng Wanzhou to allow her to return safely to China, and not to go further down the wrong path.” Ottawa and its diplomatic corps must brace for some swift political retaliation for what Beijing misperceives as nakedly political decisions. It is hard, evidently, to understand the machinations of an independent judiciary when one’s own is anything but.

In fact, Holmes’ ruling should give all sides, should they give it a reasoned read, reassurance that the handling of this case remains resolutely detached from political considerations. Meng’s lawyers had argued that since the fraud charges stem from allegations the executive lied to global bank HSBC concerning violations of U.S. sanctions on Iran, and Canada did not have such sanctions, that this would not be a crime in Canada. Crown lawyers argued that the charges are about fraudulent representations to the bank, rather than what the misleading statements were about. The judge rejected some of the Canadian government’s argument, but ultimately ruled in its favour: that if someone in Canada made false statements that put a foreign bank at risk of breaking foreign sanctions, that would be illegal. “I cannot agree with Ms. Meng that to refer to U.S. sanctions in order to understand the risk to HSBC is to allow the essence of the conduct to be defined by foreign law.  Canada’s laws determine whether the alleged conduct, in its essence, amounts to fraud,” Holmes writes.

Meng’s team can appeal this decision, says Asad Kiyani, an assistant professor of law at University of Calgary. Meanwhile, extradition hearing continues in June, and her defence lawyers will try once again to end the process by arguing that she was unjustly treated when authorities initially detained her Vancouver International Airport, where she was connecting to a flight to Mexico. Then there’s a hearing to determine if there’s sufficient evidence support extradition—and Canada sets the bar quite low for that part of the process, Kiyani says. Even if appeals on the double-criminality ruling and abuse of process are longshots, he adds, Meng lawyers are likely to take each chance: “It’s worth taking, especially if you’re concerned about the latter stages of the hearing.”

This process can stretch out over years, despite the government’s stated desire to proceed “expeditiously.” Alas, there has been no parallel judicial structure for Spavor or Kovrig to avail themselves of. No talk of expeditious anything in Beijing’s treatment of them. And the Trump administration, whose extradition request placed Canada in this vise, does precious little to fight for Canada in this mess, even as the president and his secretaries ratchet up tensions themselves with accusations that China is at fault for the ballooning tally of U.S. casualties from coronavirus.

This past weekend, Meng and her colleagues appeared on those courthouse steps for a bizarrely premature “thumbs up” group photograph. Not only did that scene seem stunningly presumptuous of the outcome, it stood out as oblivious to the world and how it’s changed in the last few months. Meng and her friends stood shoulder to shoulder, extended thumb to extended thumb, without masks—as though there were no risk of catching coronavirus within a large group gathering. As though the confidence and influence of a high-ranking member of China’s executive class, with the support of a sabre-rattling government, could thumbs-up its way to victory in a democratic, rule-of-law state.

—with files from Hamdi Issawi