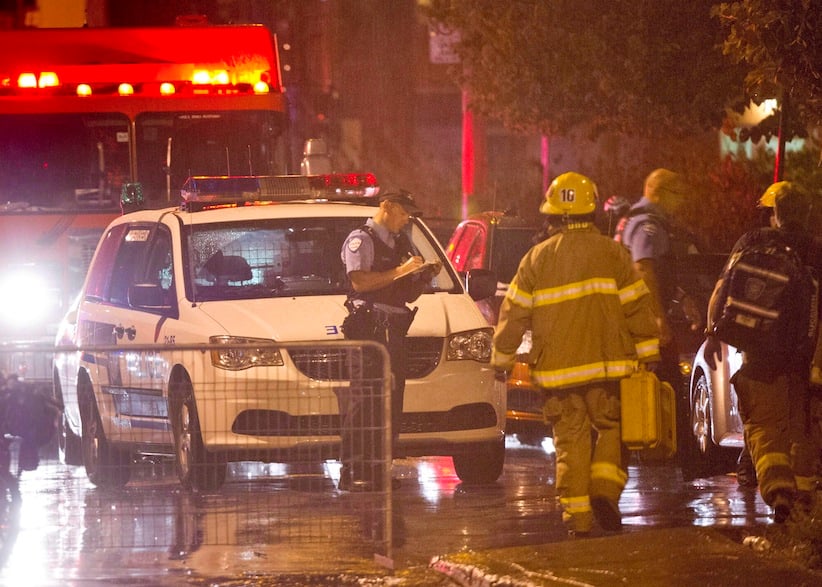 Police and fireman work at the rear of an auditorium where a gunman shot and killed at least one person during the PQ victory rally on September 5, 2012, in Montreal. (THE CANADIAN PRESS/Paul Chiasson)

MONTREAL – Defence witnesses at Richard Henry Bain’s first-degree murder trial portrayed him Monday as someone who never appeared at odds with francophones.

Bain is charged in the shooting death of lighting technician Denis Blanchette outside the Metropolis nightclub on Sept. 4, 2012, as Parti Quebecois premier-designate Pauline Marois was inside celebrating her party’s election victory.

During his arrest, Bain was caught on film shouting, in French, ‘The English Are Waking Up.”

The Crown alleges he told psychiatrist Marie-Frederique Allard his plan that night was to kill as many Quebec separatists as possible, including Marois.

On Monday, however, the defence called witnesses who said they never saw any sign of tension between Bain, 65, and French-speaking Quebecers.

“To me, he was a normal employee,” said Hans Pearsson, a colleague of Bain’s at a copper factory before the accused retired in 2008. “He was never violent. He never talked about anglo rights.”

Alain Goyer, who worked under Bain, said his supervisor was very human, was concerned about the working conditions of employees, encouraged his colleagues and always had a kind word for them.

Goyer said he continued to have a good relationship with Bain after his supervisor’s retirement.

But he said he had noticed a dramatic change in Bain’s behaviour around the time of a three-week lockout in 2007. He testified the accused had become impatient, authoritarian, nervous and less focused and that even his body language had changed.

Another witness, Roger David, said he has known Bain for 35 years because his parents had a chalet near Bain’s.

He testified he never witnessed any discord between Bain and his father or with any other francophones.

David did say he noticed a change in Bain’s behaviour when he retired, saying he joined a religious group and began talking about religion.

“You could no longer reason with him, to make him change his mind,” he testified.

“He’d be fine one minute, then excitable. Very emotional.”

Robert Bain said his brother visited him and his wife in hospital the day of the election and asked him if he knew where the Metropolis was.

“He was calm, normal,” he said, adding his sibling showed no sign of hostility at that moment toward francophones or Marois.

Defence lawyer Alan Guttman has said he will try to show Bain should be found not criminally responsible by way of mental disorder — an argument based largely on Bain’s consumption of antidepressants, which apparently caused him to lose contact with reality.

Bain also faces three charges of attempted murder and two arson-related counts. He has pleaded not guilty to all six.