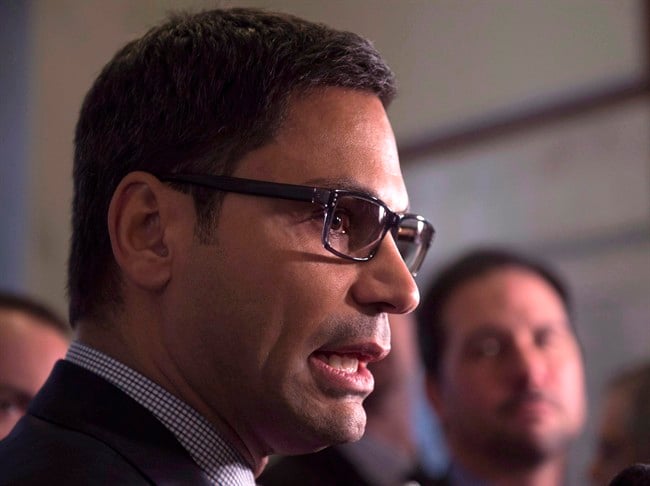 Quebec Deputy Government House Leader Gerry Sklavounos speaks to media members at the legislature in Quebec City on Tuesday, April 5, 2016. Sklavounos stepped down from the Liberal caucus on Thursday after a young woman alleged she was sexually assaulted by someone in the party. (Jacques Boissinot/CP)

MONTREAL – The woman who alleges she was sexually assaulted by a Liberal member of the Quebec legislature says his career is not as important as what she had to endure.

Alice Paquet told Radio-Canada she was assaulted twice by Gerry Sklavounos, a longtime member of the national assembly who stepped down from the Liberal caucus Thursday to sit as an Independent after the allegations surfaced.

None of the allegations have been proven and Sklavounos, who has denied the accusations, is not facing any criminal charges.

“He sexually assaulted me,” she said in the Radio-Canada interview. “It’s his career, that’s true, and it’s a lot. But is his career worth more than what I lived through? That’s the question I asked myself, and … no (is the answer).”

Quebec City police confirmed a complaint was filed in March 2016 and Paquet said Thursday she wants authorities to investigate.

The Canadian Press does not generally identify alleged victims of sexual assault without their consent. In this case, Paquet has spoken publicly about her case and appeared on TV talking about it.

Paquet first went public with the allegation at a vigil Wednesday night in support of victims of alleged sex crimes at Universite Laval’s student residence and on a widely distributed Facebook post that has since been deleted.

She spoke at length about two alleged sexual assaults that took place in 2014 when she was 19 and working as a hostess at a Quebec City restaurant.

Paquet told Radio-Canada she met Sklavounos, who is now 41, at an establishment frequented by politicians. She agreed to have a drink with him to discuss politics before going to his room upstairs.

She doesn’t remember saying “No” to him, but at some point she no longer wanted to be with him. She told the interviewer she definitely didn’t say “Yes” to sexual activity.

She wrote in the now-deleted Facebook post she ended up in hospital and that a rape kit was completed.

Paquet told Radio-Canada she went to see Sklavounos again at his room a few weeks later and alleges she was again sexually assaulted.

On Friday, she refused to say at a news conference why she decided to see him again.

The young woman said she hesitated before going public this week. Even recently, people in her entourage had counselled her to keep mum.

She told the crowd at the university — including several provincial politicians — that the police probe had gone nowhere. She later explained to Radio-Canada that was her choice.

“It was those around me. I was told: ‘He has children. He has a wife. He’s an MNA, a former defence lawyer. He knows what to do, who to talk to.’ Me … I’m a student … I felt very alone even if I had the support of my friends, my family.”

She struggled with that issue even after filing a police complaint last March.

Sklavounos, a member of the legislature since 2007, could not be reached Friday but he did tell Le Journal de Montreal he is “completely innocent” and ready to fight to clear his name.

“I never, never, in my life, sexually assaulted anyone,” he told the newspaper.

In Quebec City, the opposition Coalition for Quebec’s Future called on the Liberals to come clean about a complaint against Sklavounos over his treatment of a Parti Quebecois aide when the Liberals were in opposition between 2012 and 2014.

Given that revelation, Paquet told reporters Friday she found it shocking that Sklavounos was allowed to keep his seat, adding she would have liked for him to resign his seat on his own.

“He continues to make decisions, already that’s horrible,” she said. “When they make a decision at the national assembly that he can stay on, the message they are sending is that it’s OK, it doesn’t matter that he’s making decisions. He raped, he raped me.”

A tired Paquet declined to answer specific questions about the assaults, replying “I’ve said a lot yesterday” to one reporter’s questions.

In Toronto, Quebec Premier Philippe Couillard said he didn’t have any prior knowledge of the allegations against Sklavounos.

“The first time I heard anything regarding that question is last Wednesday evening, when it was mentioned that there was an incident with one of the members of the national assembly,” Couillard said.

“The next morning it was mentioned it was a Liberal MNA, the name was known a few hours later and I immediately acted and now Mr. Sklavounos is no longer part of our caucus.”