Const. David Wynn has not regained consciousness since being shot alongside his partner by Shawn Maxwell Rehn 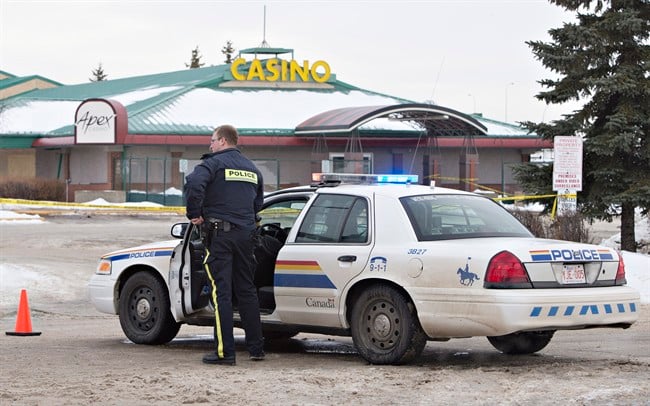 Police contain the scene where two RCMP officers were shot in St. Albert, Alta., on Saturday, January 17, 2015. The Mounties in Alberta have identified a suspect who was found dead following the shooting of two RCMP officers. (Jason Franson/The Canadian Press)

ST.ALBERT, Alta. – An Alberta Mountie severely wounded on Saturday was not expected to live, the RCMP said Sunday as the force’s commissioner expressed dismay over the criminal background of the man police believe responsible for the shooting.

Const. David Wynn had not regained consciousness more than a day after the shooting, Asst. Commissioner Marianne Ryan, in charge of the RCMP in Alberta, told a news conference in Edmonton.

“He sustained a life threatening injury to the head at close range, we do not expect him to survive,” said Ryan, who visited Wynn’s bedside on the weekend.

“He is being treated and looked after in the hospital, but it is not optimistic he’ll survive,” added Ryan, who was joined by RCMP Commissioner Bob Paulson.

Wynn, 42, and Derek Walter Bond, an auxiliary constable, were shot in a casino northwest of Edmonton while investigating a suspicious vehicle.

Bond was shot in the arm and torso, but was released from hospital on Saturday.

Mounties in Alberta identified a suspect on Sunday who was found dead in the hours following the shooting.

Police said that Shawn Maxwell Rehn, 34, was the person whose body they found in a home, not far from the Apex Casino in St. Albert where the two officers were shot.

Paulson and other officials declined to go into detail about that criminal history, but Paulson noted it may provoke an examination of the police and justice system that allowed Rehn to be free.

“I’ve been policing for 30 years and I’ve never seen anything the likes of this,” Paulson said.

Police said an autopsy to determine how Rehn died will be performed on Monday.

The shooting of Wynn touched a personal chord thousands of kilometres away. People in a Nova Scotia community where he once served as a paramedic expressed shock and prayed for his recovery.

“For many years, we worked side by side with him in his former career,” said a Facebook post from the Bridgewater Police Service, on Nova Scotia’s south shore.

“When he made the decision to switch careers and join the RCMP, we supported him.”

“Our love and support go out to his family, friends, and colleagues.”

Stacey Brown, with Emergency Health Services in Nova Scotia, said all employees at the agency were thinking of Wynn, as well as Bond.

“On behalf of all EHS employees in Nova Scotia, our hearts, thoughts and prayers remain with both RCMP officers, their colleagues and the officers’ family,” Brown said in an email.

Paula Power, a spokeswoman for St. Albert Public Schools, said Wynn has been a resource officer at Keenooshoyo Elementary School for five years. She said his main duty has been to provide drug education for Grade 6 students, but he was frequently in the school speaking with students and parents, and appears annually in red serge for the Remembrance Day assembly.

Power said counsellors were to be available at the school Monday for students, as well as for teachers and staff.

Wynn is the face of the RCMP for many of the students, who have known him for most of their elementary school years.

“It’s tremendously shocking. It is for the whole community. But when it affects someone with a relationship with a school, it’s different,” Power said.

Police have said it didn’t appear Wynn and Bond were expecting trouble when they walked inside the casino, and on didn’t know the identity of the man they confronted or his background.

The suspect fired two shots and police said Wynn didn’t have a chance to fire back. Bond, being an auxiliary constable, wouldn’t have had a gun and normally only carries pepper spray and a baton.

Evidence suggests no one else was involved in the shooting.

A massive manhunt tracked Rehn to an unoccupied home, where police said it appeared he forced his way in.

Police have said they surrounded the home tried to establish communication. When that failed, they entered the home and found the man dead.

RCMP Assistant Commissioner Marlin Degrand said he has viewed the security video from inside the casino. He said the officers were trying to place hands on Rehn when he broke free. Bond was shot first, then Wynn. It was very quick, he said.

Paulson said it wasn’t a firepower issue. He said officers were well-equipped.

“Frankly, this is not an issue of a tactical response gone bad. This is an issue of this individual walking around in conditions that we need to understand whether it was reasonable for this man to be walking around at this time,” Paulson said.

The Alberta Serious Incident Response Team, a police watchdog, said it will investigate Rehn’s death. It said in a news release that since the body was found while the home was being contained by police, it is considered to be a death in police custody.

Mark Furey, who represents Lunenburg West in the Nova Scotia Legislature, said Wynn and the shooting were what many people were talking about on Sunday.

Furey, himself a 32-year veteran of the RCMP before entering politics, said he remembered Wynn when he was still a paramedic.

Furey said the shooting, and every other recent police shooting in the country, has had particular significance for Bridgewater. Another RCMP officer, Sgt. Derek Burkholder, was killed in 1996 when he was shot while attending to a domestic call in Lunenburg County.

“It’s a very close community,” Furey said of police and EMS staff. “They find themselves in close services on frequent occasions.”