Wounded Oct. 22 officer tells his story as 20 honoured for bravery

Const. Samearn Son was one of 20 parliamentary security officers and Mounties honoured for bravery on Oct. 22 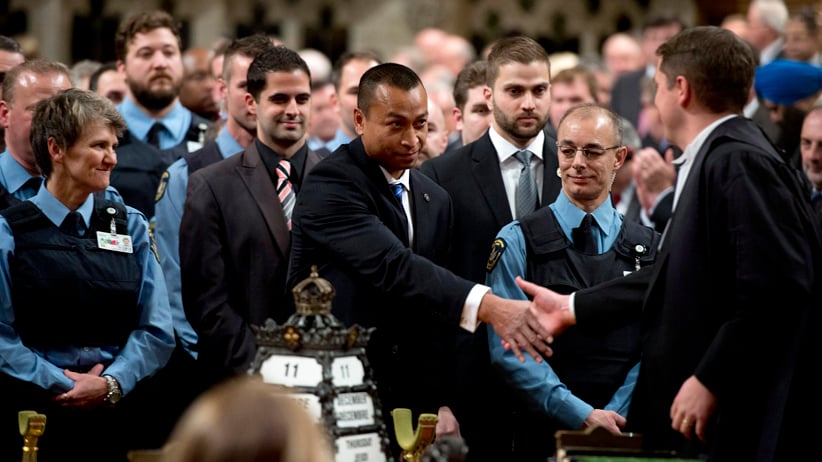 House of Commons Speaker Andrew Scheer shakes hands with Const. Samearn Son as other security members look on in the House of Commons as they are honoured for their efforts during the October shooting on Parliament Hill, Thursday December 11, 2014 in Ottawa. (Adrian Wyld/CP)

OTTAWA – A House of Commons security officer who was shot in the leg when a gunman stormed Parliament Hill says he thought he would die that day.

Const. Samearn Son was one of 20 parliamentary security officers and Mounties honoured Monday at RCMP headquarters for their bravery on Oct. 22 of last year.

In his first public account of the dramatic events, Son said he caught sight of rifle-toting Michael Zehaf Bibeau — who had just shot and killed a sentry at the National War Memorial — through the glass of the Centre Block doors.

Son instinctively reached for his pistol, which he only wore as a concealed weapon when working plainclothes duty. But that day he was in uniform inside Parliament’s main building and did not have a sidearm.

Son decided to “square up” and try to block Zehaf Bibeau from shooting fellow officers.

“I could die running or I could die buying my partners some time,” he said Monday following the emotional ceremony.

Son believes his life may have been saved by the heavy west door under the Peace Tower that Zehaf Bibeau had to pull open, which meant the attacker’s rifle was facing down.

The officer says he yelled “Gun! Gun! Gun!” before lunging and hearing a bang as Zehaf Bibeau fired his Winchester.

“I thought it was lights out,” said Son, 38, who was born in a refugee camp in Thailand and came to Canada as a young boy. “I was super-grateful that I was still standing on my two feet.”

The gunman continued up the stairs toward the Hall of Honour and only later did Son roll up his pant leg and notice a hole in his sock.

“I saw blood on my boots,” said Son, who recovered after two months of rehabilitation.

Related: An oral history of what happened on Oct. 22

A visibly moved RCMP Commissioner Bob Paulson told a hushed audience it’s “difficult to understand what happened” on Oct. 22, but one thing is clear: officers worked together to stop a man “with murder in his heart.”

House of Commons security officer Const. Charles Thom was at the top of the Centre Block stairs, working plainclothes protective duty for Stephen Harper, prime minister at the time, who was attending party caucus.

Thom says he heard Son’s shouts, turned to his left and shot Zehaf Bibeau once in the chest, only to see him continue running down the hall, much to the officer’s amazement.

He subsequently heard reports — which turned out to be false — of 13 more attackers on the roof of the Centre Block, a terrorist at the parliamentary visitors’ centre and a sniper atop the Langevin Block across the street.

“So we had to be prepared for everything.”

Thom has been diagnosed with post-traumatic stress disorder and has not returned to his job, nor does he expect to.

“I have zero interest in going back to work,” he said. “It’s not very fun. You get these fog-like episodes, a lot of anger.

The attack on Parliament Hill actually lasted only 90 seconds for Thom, but he says it seemed like a lifetime.

The RCMP was responsible for the grounds of the parliamentary precinct at the time, while House of Commons and Senate security forces had jurisdiction inside the Parliament Buildings.

A now-merged parliamentary protective service manages day-to-day security on the Hill under direction of the RCMP, a direct consequence of Oct. 22.

Former House of Commons sergeant-at-arms Kevin Vickers, now Canada’s ambassador to Ireland, was lauded for his role in subduing Zehaf Bibeau, but there had been no formal recognition of others until Monday.

Several of those honoured, including RCMP Const. Curtis Barrett — believed to have fired many of the final shots that took Zehaf Bibeau down — did not wish to be interviewed.

RCMP officer Patricia Flood, a constable stationed on the Hill that day, still finds it hard to talk about.

“I’d rather not get into the details of it,” she said. “It was a difficult day for me.”

She has had trouble sleeping, issues that have “subsided a little bit” with some help.

Flood bristles when she hears criticism in the media about the security services’ performance during the violent incident.

“You do take it personally,” she said, clutching the plaque she received Monday. “Because we were the ones who responded that day.”

Paulson acknowledged the “dangerous and stressful” nature of police work and praised the supportive families of officers, saying “we couldn’t do what we have to do” without them.