"It's quite a miracle that no one was seriously hurt," she said of the tornado that hit the community Tuesday afternoon 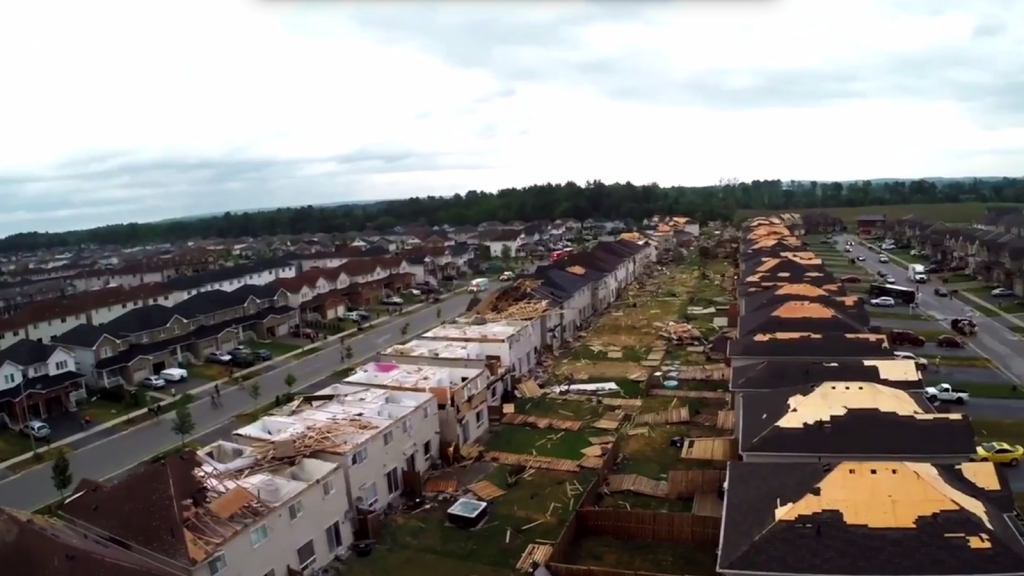 ANGUS, Ont. – It’s too early to say if provincial funding will be needed to help people rebuild their lives after a tornado tore a path of destruction through Angus, Ont., Premier Kathleen Wynne said Friday after seeing the devastation first hand.

“It’s impossible at this point to be able to assess what the costs would be that are not covered by insurance,” Wynne said of the property damage from the Tuesday afternoon twister in the community 100 kilometres north of Toronto.

“For the most part the damage that has been done is private property, but those assessments have not all been done yet, so it’s unclear what’s insured, what’s not insured.”

Municipal officials will let the province know what the costs are when the bills come in, added Wynne.

“There is provincial disaster relief funding that is always in place when one of these terrible incidents happens, but there’s a process to go through,” she said.

“There will be no break in the communication between the on the ground work that’s being done and the support that we will provide provincially.”

Media were not allowed to tag along because of safety concerns as Wynne went behind the police tape for a close-up look at the damage, which she said was more stark than she had expected from the pictures on television.

“Having seen the damage, it’s quite a miracle that no one was seriously hurt,” she said.

“This happened at a time of day when kids were home from school and families were getting ready for supper, and it’s quite remarkable that no one was hurt and that people made it into their basements and were safe.”

Wynne met privately with some residents whose homes were damaged by the twister, which sheared roofs off of many houses, snapped trees in half and flipped over cars.

Despite their personal losses and suffering, they praised the first responders and the way the community pulled together after the storm as “terrific,” said Wynne.

“They’re still in quite a bit of shock from the impact this has had on their lives (and) they’re worried about the timing of getting back into their homes,” she said.

“Of course there is a little bit of frustration about wanting to get back into their homes, but we have to make sure that everyone is safe.”

Extra building inspectors were being brought in because even houses that look safe may not be because they may have twisted on their foundations from the force of the wind, said Wynne.

“There is a lot of unsafe debris that makes it difficult for people to get to their homes,” she said. “Debris is an impersonal word. There are kids dolls that have been tossed out of their houses, very personal belongings that people will need to sort through now, so it’s a time consuming and painstaking and process.”

Wynne said video and pictures of the devastation don’t tell the whole story.

“To actually see the degree to which people’s lives have been disrupted is very compelling, and it certainly helps us to understand how important it is that we make sure that safe conditions are in place before people move back.”

Mayor Terry Dowdall of Essa Township, which includes Angus, said volunteers from the Mennonite Disaster Service arrived Friday to help the town with the clean up efforts.

“The Mennonite disaster relief organization, they’re here today and are already working as we speak to clean up those yards, making it safe for the adjusters to go into those houses,” said Dowdall.

Emergency officials allowed some residents to briefly return home to retrieve belongings, but others were still being kept from their badly-damaged houses.