'They don't know that they’re not looking at their own boy, and I remember the mom saying, "He’s beginning to look more like our boy." '

On Monday the Saskatchewan Ministry of Justice said authorities mixed up the identities of two players involved in Friday’s horrific bus crash in Saskatchewan—one who had in fact lived, Xavier Labelle, and one who had died, Parker Tobin. During a special radio talk show that aired on Rogers radio stations in Ottawa, Kitchener and Halifax, Ron MacLean of Hockey Night in Canada talked about being in the hospital room with Don Cherry and the parents of Parker Tobin who thought the boy in the bed was their badly injured son, when in fact it was Xavier Labelle.

Here’s a transcript of what Ron MacLean said:

I just have to tell you the story in the ICU yesterday. Don and I were visiting with what we thought was Parker Tobin’s family. So you know the story now—Parker Tobin, the goaltender from Stony Plain, Alberta, we thought had survived. In fact it was Xavier Labelle.

But as we looked at who we thought was Parker Tobin, the mom—so imagine, the mom and dad and the brother, they don’t know that they’re not looking at their own boy, that he’s so severely cut and hurt that they actually think it’s possibly their boy.

And I can remember her, this is Parker, the mom, saying, “He’s beginning to look more like our boy.”

Can you imagine? And it wasn’t, of course, their boy. 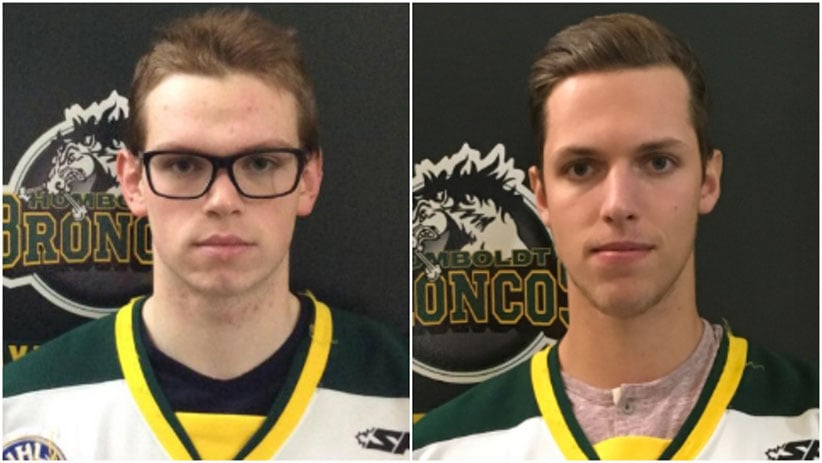 And the dad saying, “When Parker was a child he had chicken pox, and there was this one scar on his forehead, and thankfully this seven inch gash will make that immaterial.” And all these horrible, in retrospect…

I even stood over his body, and I was talking to the child and saying, “It’s Ron and Don, we want to do a Coach’s Corner bedside for you tonight, everything’s going to be okay.”

And when I was saying that, the boy began to rise up a little bit and the nurse quickly put him back down. Because this boy, who we now know was Xavier Labelle, in addition to these horrific cuts, he had a vertebrate broken, he had a rib broken, he had a hip broken, he had a lacerated liver. All of the children were mangled beyond a miracle, really.

And then last night, Father David Tumback of Cathedral of the Holy Family phoned me and said, “Ron, I’m doing the funeral for Xavier Labelle later this week, would you mind jotting down a few words that I can present to the children. It’s up to you Ron if you think you could do it.” And I said, “Well, I’ll give it a shot David, but you see if it’s appropriate.”

And so then I phoned Marc Chartier who had been the coach of Xavier Labelle with the Contacts in Saskatoon, a great midget triple-A team that went to the Telus Cup down in Quispamsis, New Brunswick, and I said tell me about Xavier.

And he said, “Oh God, Ron, just the most beautiful human alive, he plays piano, speaks both languages, sharp as a tack. His father Paul’s a bit of a cut up at the Telus Cup, he would dress up in clown suits and bang a drum.”

They were having a party tonight at Marc Chartier, the coach’s house, to honour the late Xavier Labelle.

Well now they know Labelle’s alive. He’s got all those injuries, but can you imagine the joy in that one scene.

And then the frickin’ devastation that I feel for the Tobin family.