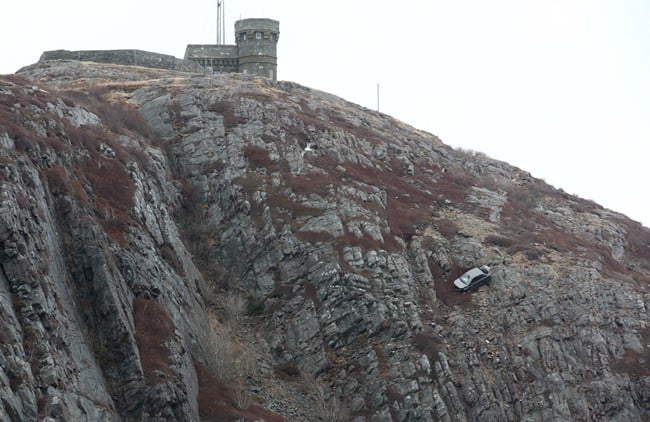 Emergency crews were called to Signal Hill in St. John’s, N.L. early Sunday morning, April 3, 2016 with reports of a car dangling over the edge.

ST. JOHN’S, N.L. – A 20-year-old woman whose car plunged down iconic Signal Hill in St. John’s, N.L., jumped or was ejected just before it crashed partway down a rocky cliff Sunday high over the Atlantic Ocean.

Mackey said the woman was either thrown or jumped from the vehicle as it nosedived over the wind-swept rock face just below Cabot Tower, coming to rest about 90 metres down the 250-metre cliff.

“As you can imagine, that was a bit of a new one for us,” said Mackey, who has been a firefighter for 30 years. “I’ve never seen anything like that before.”

Mackey said the woman, the car’s only occupant, landed roughly 45 metres down the cliff face and was rescued by emergency crews within about 20 minutes. She was taken to hospital with serious injuries.

“I can’t even speculate on how or why she managed to be up there,” said Mackey, adding that the investigation is ongoing.

Royal Newfoundland Constabulary spokesman Const. Geoff Higdon said no foul play is suspected. He said the woman’s identity is not being released at this time.

Higdon said the car was in an area closed to traffic. A wooden gate down an access road below Cabot Tower was open Sunday afternoon and appeared to have been damaged.

Mackey said the badly-damaged Toyota Echo, which was teetering on the rocks in 100 km/h winds, has also been recovered. He said crews consulted with Parks Canada and made removing the car a priority.

“Because of the precarious position of the vehicle and all the hiking trails that are well-used up there, we needed to make sure that nobody would walk underneath the area that the car was perched,” said Mackey.

“The winds were actually making the car move and it could have easily kept sliding down and it wouldn’t have stopped until it went into the harbour.”

The winding road up Signal Hill, which draws tourists and locals for its spectacular ocean views, was blocked by police for much of Sunday as a tow truck perched near Cabot Tower successfully pulled the vehicle back up the cliff.

Dozens of cars lined the road toward Fort Amherst across the Narrows from where the battered vehicle came to rest on the steep rock face. Curious onlookers watched as what appeared to be a grey, four-door sedan was slowly hauled up.

It was later taken on a flat bed truck back down Signal Hill.

Tire tracks and broken glass were visible toward and over the cliff beside observation decks as high winds whipped across the area.

As soon as the road reopened, a stream of vehicles headed up Signal Hill to look at the path the car appeared to have taken.