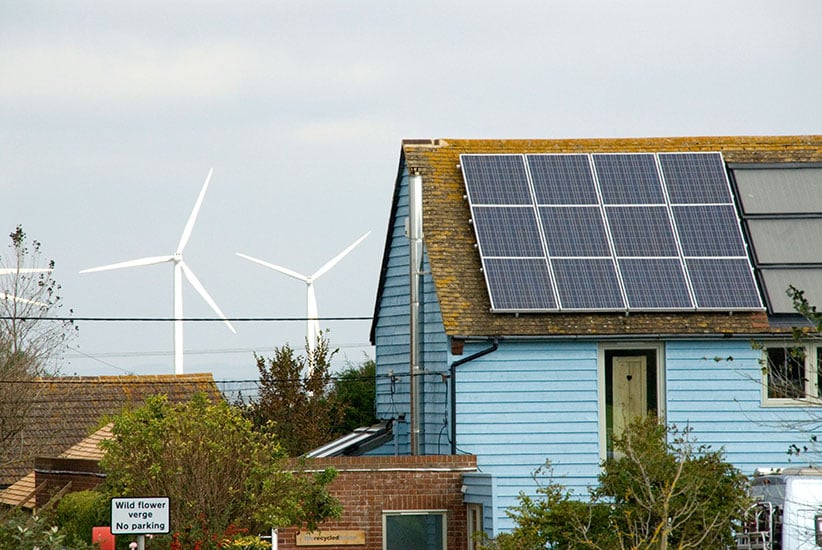 Wind turbines behind a house with solar panels. (Nick Hanna/Alamy)

OTTAWA – Canada’s clean technology sector, once pegged as a growth industry with the potential to be worth $50 billion by the year 2022, is bleeding money and falling behind international competition, a new report says.

In its first annual report on the industry in 2011, Analytica said clean technology had the potential to become an industry worth upwards of $50 billion in Canada over the course of the next decade.

That goal is now “out of reach,” said Analytica president Celine Bak, without a significant change in how financial markets make capital investments.

“When I made that call several years ago, there was an assumption at that time that financial markets would move more quickly than they have,” Bak said.

Now anticipated revenues by 2022 are expected to be closer to $18 billion.

In 2015 the industry had $13.27 billion in revenues, up eight per cent over 2014. Retained earnings, however, have declined every year for the last five years and all but one sector within the industry have seen negative returns on sales in the same time period.

Only green power generation companies had positive returns on sales between 2011 and 2015.

“It means we have an industry where companies are not yet at a scale where they can be profitable,” said Bak.

“They need capital in order to get to that scale. Private-sector financial markets, by virtue of the regulation that they must abide by, do not yet have the flexibility to lend to companies that are not profitable.”

Canadian companies do very well on research and development – investing about $1.5 billion in 2015 – but are applying for fewer patents than in previous years and are struggling to get the money to physically produce the products for sale.

That makes those companies ripe for foreign takeover, says the report.

The report wants work fast-tracked to have the financial industry start taking into account climate change and emissions as part of its risk assessments when lending money. Analytica also recommends Ottawa speed up its own investments, and start phasing out subsidies for fossil fuels to help make clean technology more attractive.

Exports accounted for $6.7 billion in revenues in 2015, about 18 per cent of which went to markets outside the United States. But Canada’s international market share of clean technology goods fell 12 per cent in 2015, to 1.4 per cent.

Canada remains ranked 16th among the top 25 exporters. China, with more than 21 per cent, Germany with almost 11 per cent and the United States, with almost 10 per cent, are the top three exporters in the industry.

The federal government invested $1.8 billion in clean technology but the largest chunks of that money isn’t available until 2019.

“We have some companies that are at the stage now, and who are ready to use that financing in the next weeks, not months, certainly not years,” said Bak.

Clean technology includes anything from biofuels and clean power generation such as solar or wind production, to companies which work on energy efficiency buildings, smart power grids, wastewater purification systems or agricultural processing.

Clean technology, with its high-skilled, well-paying jobs, is an industry young Canadians should be encouraged to look at for careers, the report notes. It is already a young person’s domain, with almost one-quarter of employees under the age of 30.