Canada's coronavirus modelling: Even the most optimistic outcome will see thousands die 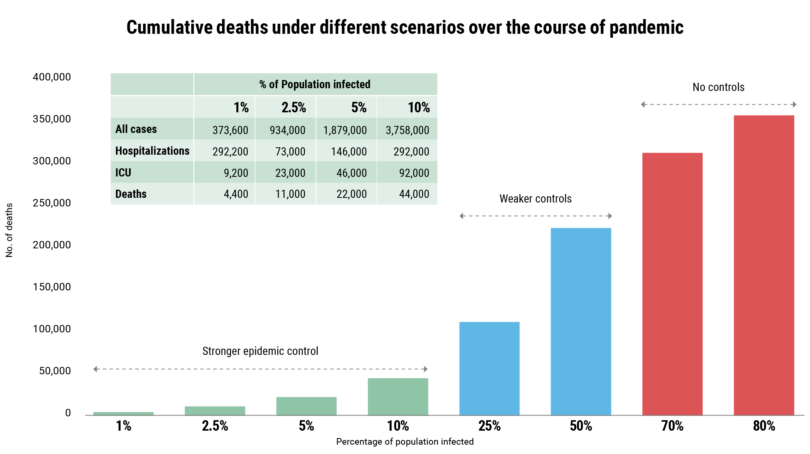 “I am the master of my fate / I am the captain of my soul.” Those famous words written by William Ernest Henley have been adopted for the deadly menace wreaking havoc in Canada. “We are the authors of our fate,” said Dr. Theresa Tam, Canada’s chief medical officer, as she unveiled the federal modelling of how the COVID-19 pandemic could hit the country.

While emphasizing that the crisis is hitting each region of Canada differently—British Columbia’s increases are noticeably lower than those in hard-hit Ontario and Quebec—federal experts provided guidance as to how the COVID-19 epidemic could look in the country as a whole in the weeks, months and even years ahead. First, they emphasized the caveats: “This is not a crystal ball and cannot predict what will happen,” Tam warned. This is a new virus, and so much of its transmission is still not clearly understood. As well, even stronger social isolation measures, as well as stepped-up testing and contact tracing, can and will affect the final data.

With what the model termed “stronger epidemic controls,” such as those now in place, federal health experts estimate that the worst of the epidemic could be over by the fall, though they expect a series of weaker recurrences of COVID-19, as is currently being seen in some Asian nations.

RELATED: So this is what data transparency on COVID-19 looks like

The toll will be high. The middle of the best-scenario range would mean around 2.5 per cent of the population gets infected, Tam said. That could mean 934,000 people would be infected—23,000 of them so seriously that they require admittance to an intensive care unit— and around 11,000 deaths. Even at that 2.5 per cent rate, health systems would be “really pressured,” she noted.

Yet the range of the “stronger epidemic control” area (shaded green on the charts the government provided) extends from one per cent of the population all the way to 10 per cent, which has a projected death toll of around 44,000. That’s the number of Canadian troops who died during the six years of the Second World War. Even a one per cent outcome would mean 4,400 dead, around 800 more Canadians than were killed at Vimy Ridge, 103 years ago today.

“This will be the new normal until a vaccine is developed,” Prime Minister Justin Trudeau said. “The path we take is up to us.”

The federal modelling follows those of several of Canada’s largest provinces, including Ontario, Quebec and Alberta. They all warn that the future will be marked by death and suffering on a scale few have seen. And that’s if we hold fast, if we continue to self-isolate, if we don’t give into the urge to meet with relatives and families over the holidays this spring, and if we follow public health directions as the temperatures rise and the temptation to quickly restart out lives grows. “We cannot prevent every death,” Tam said, “but we must prevent every death we can.”