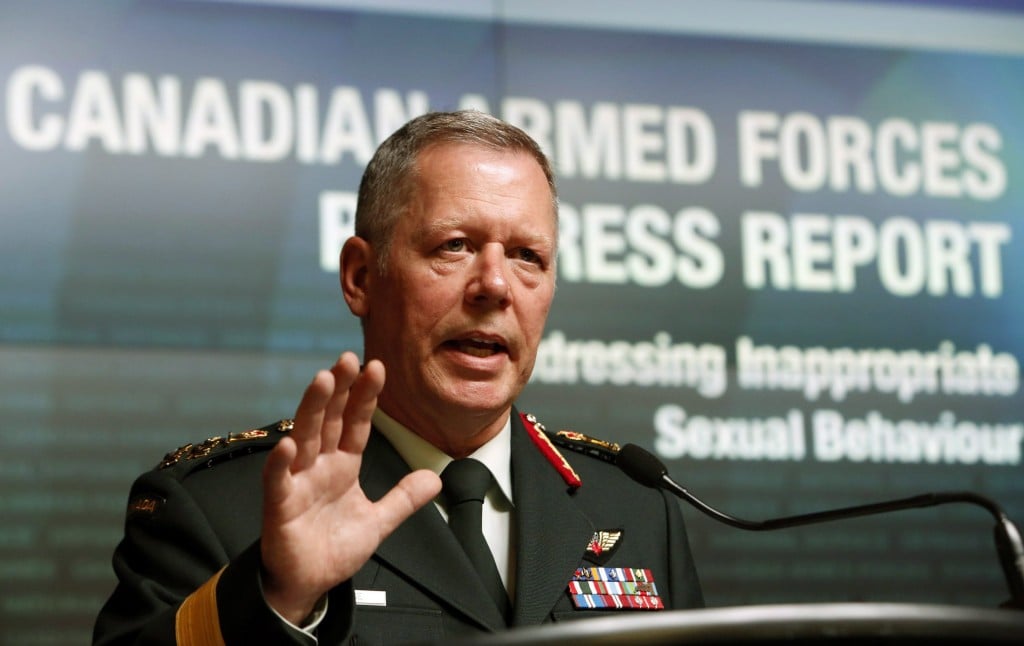 Chief of Defence staff General Jonathan Vance speaks during a news conference to , in Ottawa Tuesday August 30, 2016. The Canadian Armed Forces says it is making progress in the fight against sexual misconduct in the ranks, but much more work needs to be done. THE CANADIAN PRESS/Fred Chartrand

OTTAWA – The military’s top brass says progress has been made in the war on sexual misconduct in the ranks, as evidenced by an increase in the number of cases being reported.

But they admit that victory remains a distant and elusive goal, even as questions persist over what repercussions offenders are really facing.

Chief of defence staff Gen. Jonathan Vance released an update Tuesday on efforts to root out what a former Supreme Court justice found last year was an “underlying sexualized culture” within the military.

The progress report said during the first six months of the year, military police received 106 complaints of sexual misconduct that warranted a criminal investigation.

That put 2016 on pace for a 22-per-cent increase over the 174 complaints received in 2015. The majority of those are sexual assault cases.

Speaking to reporters at National Defence Headquarters, Vance warned that the military still has a great deal of work to do. But he took the fact more people were coming forward to report sexual offences as an encouraging sign of progress.

“This demonstrates to me that those military members are more confident that they will be heard, and that we will act,” he said as the commanders of the Canadian air force, army and navy looked on.

Yet the report did not say how many criminal investigations resulted in charges or convictions.

Julie Lalonde, an assault prevention educator who has lectured at the Royal Military College of Canada, said such information is a “bare minimum” for assessing the military’s progress on fighting sexual misconduct, particularly as one of the primary concerns raised by victims was a lack of accountability.

“We should be finding out what’s being done with every single one of those complaints,” she said. “Not just as an accountability measure, but that’s what the victims deserve.”

The report did not focus on the 106 cases that warranted criminal investigation. Instead, it focused on disciplinary measures taken in response to 148 other complaints of “harmful and inappropriate” sexual behaviour between the beginning of April and the end of July – most of which were non-criminal in nature.

Investigations had been completed on 51 of those cases, with 30 military personnel punished. Vance said 24 had received “severe” punishments that ranged from fines to outright dismissal. Six did end up being convicted of criminal charges, while three others were referred to civilian authorities. Ten cases were ruled unfounded.

While Vance said he was encouraged by the military’s progress, “incidents of harmful sexual behaviour are still occurring, and that is completely unacceptable.” Vance acknowledged that some personnel in uniform and members of the public will remain skeptical that the military is taking the issue seriously.

Military officials said the next few months will involve analysing the results of a survey of 40,000 Canadian military personnel conducted in conjunction with Statistics Canada earlier this year to get a handle on the scope of the problem.

In the meantime, the military has created six sexual offence response teams across the country that will be tasked with investigating reports of criminal activity. Work is also underway to see if there are ways to improve a victims’ response centre that was established last year.

Military commanders have been grappling with the issue of sexual misconduct in the ranks since l’Actualite and Maclean’s magazines reported in April 2014 that a large number of military sexual assaults were being ignored or played down.

Retired Supreme Court justice Marie Deschamps was tapped to lead an independent investigation into the issue and her explosive report, released in April 2015, described an “underlying sexual culture” in the military that was hostile to women and left victims to fend for themselves.