Residents of Churchill, Man., say it's time to stop sending motherless young animals to southern zoos. But can they ensure the cubs get the bear necessities? 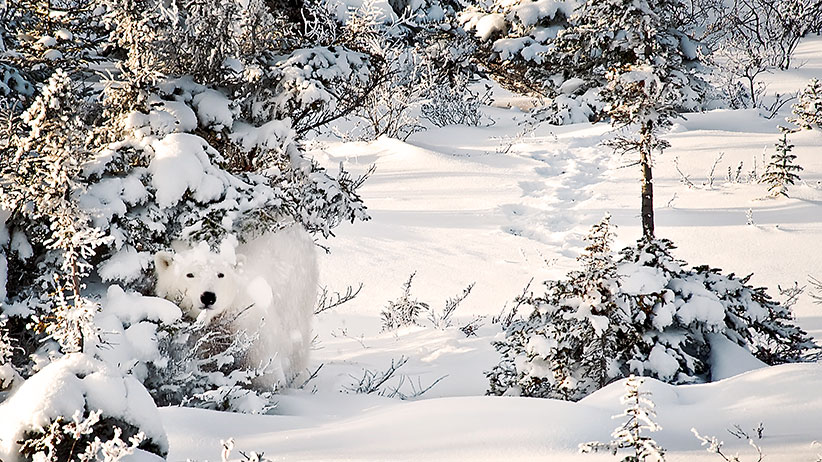 A polar bear cub amongst snow covered trees near Churchill, Man. Some cubs become orphaned and are sent south to a conservation centre in Winnipeg (Michelle Valberg/Getty Images)

The cub was obviously alone when tour operator John Gunter and his group of polar-bear-watching tourists spotted it about five kilometres east of Churchill, Man. The bear—hardly larger than an oversized dog—was ambling, motherless, along the frozen Hudson Bay tidal flats. The group alerted wildlife officials, and Gunter was unsurprised to learn later that the cub had been captured and, with another orphan bear found in town a week earlier, sent to a zoo in Winnipeg.

More surprising was the uproar: The transfer of the two 11-month-old cubs sparked an outcry by Churchill residents, and now the town known as “the Polar Bear Capital of the World” wants an end to the practice of always shipping its orphan bears south. “It’s time we do things differently,” says Mike Spence, the mayor.

Since 2013, 11 young orphaned polar bears—including the two recent cubs—have been sent from Churchill to the Assiniboine Park Zoo’s Leatherdale International Polar Bear Conservation Centre in Winnipeg. The four-hectare, state-of-the-art research and conservation facility hosts a polar bear and Arctic exhibit that informs almost 400,000 visitors a year about life in the North and, especially, about the perils of climate change.

Polar bears are the undisputed poster animal for the planet’s No. 1 environmental threat. Most of the 19 populations across the Arctic are too-little-studied to say whether the total estimate of 25,000 animals is dwindling, but Arctic sea ice certainly is. And without the ice from which the great white bears hunt ringed seals, the species can’t survive, say scientists.

Researchers believe worldwide polar bear numbers (60 per cent live in Canada) are likely to drop by at least a third within the next four decades. For the well-researched population along western Hudson Bay—the 800 or so bears found around Churchill—predictions are even more ominous.

“We will probably see that population blink out by mid-century,” says Andrew Derocher, a University of Alberta biologist who has studied the Churchill bears for more than 30 years. Derocher and fellow biologist Ian Stirling were the first to establish the link between polar bear survival and shrinking sea ice—research that secured the bear’s renown as the face of climate change.

For Churchill, the celebrity of the imperiled bears has been a lucrative irony. Over the past three decades, the town of almost 900 has built a thriving industry around the 15,000 yearly visitors who come, for the most part, to see the famously disappearing polar bears. According to the province, tourism in northern Manitoba generates $116 million annually, and a new five-year “Look North” tourism strategy (unveiled the same week the cubs were sent south) hopes to boost this by another $35 million.

The prospect of fewer bears—or none—around Churchill is understandably worrying, and losing orphan cubs to distant zoos isn’t seen as helping the matter. Adding to concerns was the accidental death of a former Churchill orphan bear (two-year-old Eli) at the Assiniboine Park Zoo this past summer. “The fact is, naturally, bears belong in the wild,” says Spence.

“I did hear loud and clear not just from the mayor but from other members of the community,” Rochelle Squires, Manitoba’s minister of sustainable development, tells Maclean’s. “The bears mean a tremendous amount to the community in Churchill.”

RELATED: The number of Hudson Bay polar bears comes into question—and another is killed in Newfoundland

Squires promised to include an additional Churchill resident on an eight-member advisory council that provides polar bear conservation guidance to the province. The minister also is directing the group to ask if anything can be done to keep young, motherless bears at home in the North.

The question is far from new, says Stephen Petersen, current chair of the council, and head of conservation and research for the Assiniboine Park Zoo. It’s also far from simple. “We don’t really have any evidence that bear cubs this young can survive,” he says. 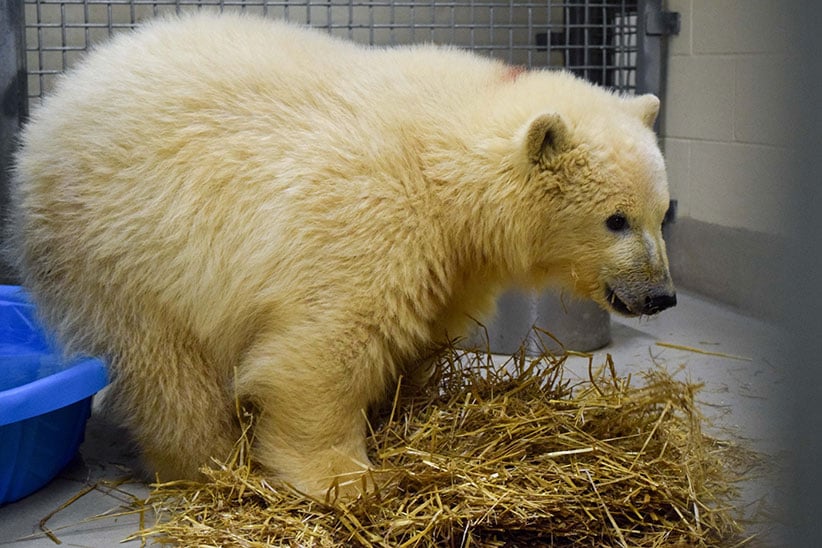 One of the two new polar bear cubs, taken shortly after their arrival at the Leatherdale International Polar Bear Conservation Centre.

Most polar bear cubs spend two-and-a-half years with their mothers, gaining strength and learning how to hunt. Solitary youngsters aged less than 16 months, says Petersen, will likely fall prey to other bears or wolves—if they don’t simply starve to death. (Scientists don’t know why apparently more cubs are being discovered alone near Churchill, but suggest mothers are occasionally killed in accidents or bear fights or otherwise separated from their young.) Releasing the two found cubs with radio tags to track them—a suggestion by the mayor—would be tantamount to a death sentence, Petersen explains. “As far as we know, their chance of survival would be zero.”

Efforts to keep orphans in the wild have been tried before. Beginning in the early 2000s, Manitoba wildlife officials launched an experimental program to encourage wild mothers with one cub to adopt an orphan bear as their second. (Instances of natural adoption in the wild have been previously reported.) Of the seven orphan cubs placed with surrogate moms, none was ever seen again.

Another idea floated by the minister: A new polar bear rehabilitation centre based in Churchill that could potentially rear the young bears for eventual release back on the tundra—though Squires stresses, “We’re just getting the conversation started.”

But scientists warn that raising large carnivores for release is notoriously difficult because of the likelihood they’ll lose fear of humans. Habituated bears pose a danger not only to people in Churchill—and in other communities along the coast—but to themselves by increasing the risk they’ll be shot. “There’s the old adage that a fed bear is a dead bear,” says Derocher.

Churchill’s mayor, who believes a rehabilitation facility could be a viable option, is less concerned. “I don’t think there’s a bear in the area that’s not habituated anymore. I mean, let’s face it,” he says. “It’s just outside-the-box thinking, rather than doing the usual thing of saying okay we’ve got an orphan cub and off they go to Winnipeg or places like that.”

The issue is a passionate one in the small, northern town, admits Gunter, the tour operator who first encountered one of the orphan cubs. He’s spent much of his life in Churchill before becoming president and CEO of Frontiers North Adventures, the town’s largest polar bear tour company.

“These are very difficult decisions,” he says. “We need to be careful before we pounce on wildlife managers and accuse them of not trying. But polar bears are wrapped up in the identity of Churchillians. There is a sense of ownership.”