On Canada Day, a group of Armed Forces members dressed in black polos and carrying a Red Ensign, disrupted an Indigenous spiritual ceremony 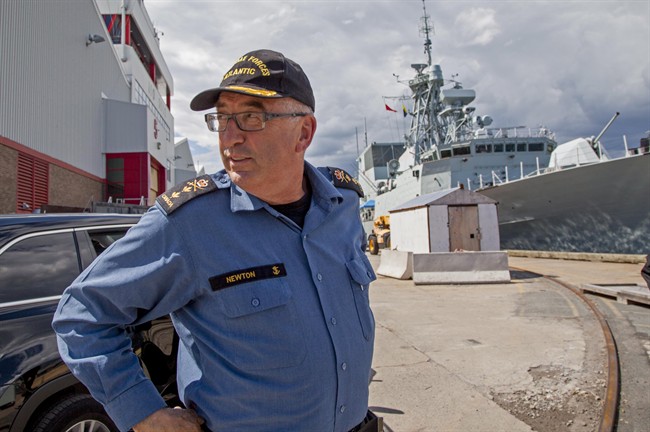 HALIFAX – Canada’s top general has condemned the actions of a group of Armed Forces members who disrupted a spiritual event on Canada Day marking the suffering of Indigenous Peoples at a statue of Halifax’s controversial founder, Edward Cornwallis.

Gen. Jonathan Vance, chief of the defence staff, called the incident “deplorable” and said the men will be removed from training and duties while the incident is investigated.

On Saturday, the group of men were clad in black polo shirts with yellow piping — one of them carrying a Red Ensign Flag — as they approached singing “God Save the Queen,” one Mi’kmaq organizer said. The Canadian Red Ensign, which bears the Union Jack in the corner, was the national flag until it was replaced by the Maple Leaf design in 1965.

The men said they were members of the Proud Boys, a self-declared group of “Western Chauvinists.”

Cornwallis, as governor of Nova Scotia, founded Halifax in 1749, and soon after issued a bounty on Mi’kmaq scalps in response to an attack on colonists. His legacy has become controversial, with debate recently over the use of his name on buildings, street signs and parks.

In a statement Tuesday night, Vance was the latest official to offer an apology to the Indigenous community, adding that the actions of the men “certainly do not represent the broader group of proud women and men who serve our country.”

“I detest any action by a Canadian Armed Forces member that is intended to show disrespect towards the very people and cultures we value in Canada,” Vance said. “We are the nation’s protectors, and any member of the Canadian Armed Forces who is not prepared to be the defender we need them to be will face severe consequences, including release from the Forces.”

Earlier Tuesday, Defence Minister Harjit Sajjan said there will be consequences for military personnel who “express intolerance while in — or out — of uniform.”

Sajjan also apologized to Halifax’s Mi’kmaq community and Chief Grizzly Mamma, who took part in the ceremony, “for the pain this incident has caused.”

“I know my words cannot undo the disrespect that was shown to you and your community. I know our government has much more work to do with respect to reconciliation with Indigenous peoples,” he said in a statement.

“But I want to give you my personal assurance that this kind of behaviour will not be tolerated within the ranks of the Canadian Armed Forces and the Department of National Defence.”

The commander of Canada’s East Coast Navy confirmed that six members of the military, including members of the Royal Canadian Navy, the Canadian army and a member of a cadet organization, were involved.

“I told the young people they had crossed a line where their personal beliefs, their personal ideology — which they are allowed to have — got into the public domain,” Rear Admiral John Newton, commander of Maritime Forces Atlantic, told reporters at a news conference in Halifax.

“Their personal beliefs, whether religious, political or white supremacy, whatever the Proud Boys represent, it’s not a shared value of the Canadian Armed Forces.”

Newton said he received complaints from Aboriginal friends, and there was a “considerable outcry” from serving members of the Forces.

“I apologize for the actions of my young sailors, and … I hope that those young people will find a moment to make their own apologies in due course.”

A video of the incident at the Cornwallis statue shows five men interacting with spectators at the ceremony.

“This is a British colony,” one of the men says in the video. “You’re recognizing the heritage and so are we.”

In the video, one of the spectators appears to hold an upside-down Canadian flag, which someone implies has been marked with the word “decolonize.”

Asked if the group is associated with an organization, one of the men in the video says, “The Proud Boys, Maritime chapter.”

The Proud Boys Canadian Chapters Facebook page says they are “a fraternal organization of Western Chauvinists who will no longer apologize for creating the modern world” and do not discriminate on the basis of race or sexuality.

A witness to the interaction says the men kept their voices down as the ceremony continued and left after about 10 minutes.

A person close to one of the individuals involved in the incident, who agreed to speak to The Canadian Press on the condition that their identity not be revealed, said the men were on a pub crawl on Saturday.

One was carrying the old Red Ensign to celebrate Canada’s 150th anniversary when they passed by the Cornwallis statue and noticed an upside-down Canadian flag with black markings, the person said.

The men did not intend to provoke people at the gathering, the person said, but were trying to peacefully defend the flag they fight for.

The person said the man they know doesn’t hold hateful views and is no longer associated with The Proud Boys. The man was acting out of character due to a combination of youth and intoxication, they said, and he deeply regrets the incident, but believes the army is taking appropriate action.

Rebecca Moore, who participated in Saturday’s ceremony, said in an interview Monday that the military shouldn’t tolerate the men’s behaviour, adding that it was far from an isolated incident.

“It’s military men coming and disturbing Indigenous women doing a ceremony,” said Moore. “That is like a story since the beginning of them landing here.

“The military has to say, ‘They don’t represent us.'”

With files from Michael MacDonald