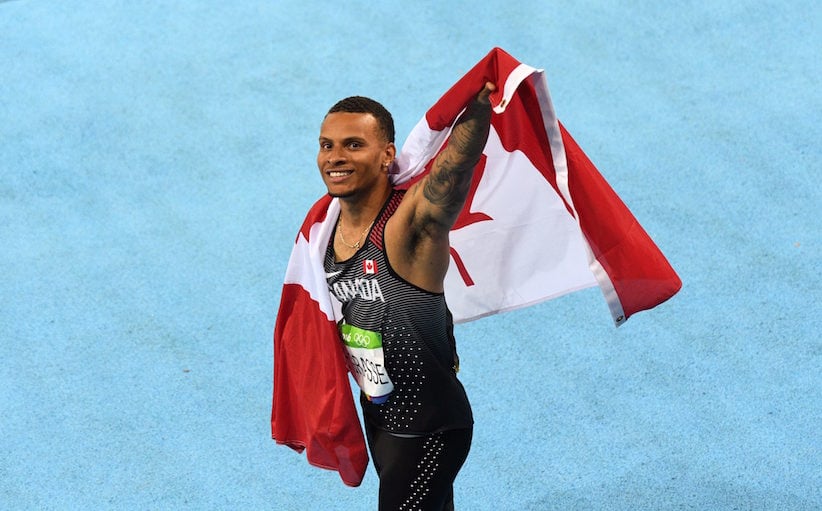 Between Derek Drouin’s gold medal in high jump, Canada’s semifinal loss in women’s soccer, and the quarter-final basketball loss, Tuesday was an eventful day for Canadians in Rio.

Day 12 is set up to provide just as much action so here are some notable events and Canadians to closely monitor on Wednesday.

Canada pulled off a few impressive upsets in the preliminary round of men’s volleyball and the team kicks off the one-and-done portion of the competition with a quarter-final matchup with Russia, starting 9:00 a.m. ET. Russia went 4-1 in preliminary round action while Canada finished with a 3-2 record. Canadian spiker Gavin Schmitt has been one of the best players in the tournament and will be looking to continue to build on his performance.

Andre De Grasse posted the best time in his heat in the qualifying round (20.09 seconds) on Tuesday afternoon and the Canadian sprinter is set to race in the semifinal round of the competition on Wednesday at 9:00 p.m. De Grasse will run in Heat 2 beside Jamaican star Usain Bolt, while Canadian Aaron Brown is set to run in the first heat of the semis. De Grasse already won a bronze medal at Rio 2016 in the 100-metre competition and is hoping to land in Thursday’s final.

The opening day of the decathlon, scheduled for Wednesday, consists of five events throughout the day: the 100-metre race, long jump, shot put, high jump and the 400-metre race. Canada has one of its best remaining medal contenders taking part in the event as Damian Warner is seeking to upgrade on his fifth-place finish at London 2012. Warner won the decathlon at the Pan American Games last summer and holds the Canadian record for the competition. Before making the trip to Rio, Warner caught up with Sportsnet’s Donnovan Bennett.

Canadian phenom Brooke Henderson will be kicking off her Olympics as Round 1 of individual stroke play begins on Wednesday. Henderson is scheduled to begin at 9:14 a.m. while teammate Alena Sharp, an 11-year LPGA Tour veteran, is set to begin at 10:25 a.m. Henderson and Sharp are hoping to land Canada’s first women’s Olympic golf medal. Henderson told Sportsnet’s Kristina Rutherford that she can’t wait to wear the maple leaf and see a monkey in real life.

After already earning a bronze medal in Rio, Roseline Filion and Meaghan Benfeito will both be participating in the 10-metre platform preliminary round on Wednesday at 2:00 p.m. Filion was the top-ranked diver in the women’s 10-metre platform at the end of the 2016 FINA World Series.

Canada has several wrestlers participating in various events on Wednesday. Jasmine Mian will participate in the 48kg 1/8 final against Yanan Sun at 9:48 a.m., Michelle Fazzarri will fight in the 58kg freestyle 1/8 final, while Dorothy Yeats will begin her match in the 69kg 1/8 final just after 10:00 a.m. Should they each advance in the competition, the rest of the event (quarter-final, semifinal and final) will all take place Wednesday so stay tuned throughout the day.

Starting at 9:00 a.m., the Canadian squad will be participating in the team jumping final. Canada is one of eight teams scheduled to participate in the event.

Matt Hughes is the lone Canadian participating in the men’s 3000-metre steeplechase final, which is set to begin just before 11:00 a.m.