Case of accused Quebec mosque shooter to resume in March 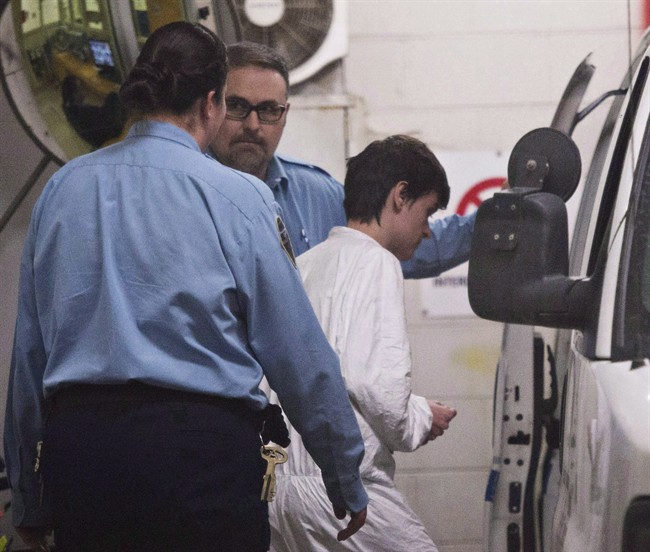 Alexandre Bissonnette is escorted to a van after appearing in court for the deadly shooting at a mosque on January 30, 2017 in Quebec City. THE CANADIAN PRESS/Jacques Boissinot

QUEBEC – The case of the man charged with murder in last month’s mosque shootings in Quebec City will resume March 30.

Alexandre Bissonnette, 27, appeared in court on Tuesday as the Crown handed over evidence to the defence lawyer.

The six victims, aged between 39 and 60, were killed when a gunman stormed the mosque and opened fire on men who were attending prayer.

Nineteen people were wounded in the attack.

Mohamed Labidi, vice-president of the mosque, attended Tuesday’s court hearing and said seeing Bissonnette unleashed a wave of emotions, including compassion for the accused.

“It hurts, especially when I see someone so young,” Labidi told reporters.

“There’s a mixture of emotions – pity for (Bissonnette) and at the same time thoughts for our brothers who died for no reason.”

Labidi said he does not believe Bissonnette should be granted bail.

“We have faith in the Quebec and Canadian justice systems,” he said, adding that someone from the mosque will be following future proceedings.

Labidi said three of the five people who spent extensive time in hospital after the shooting have been released and are being treated at home. Another is still in intensive care while the fifth is in critical condition and in a coma.