CBSA seizes $1.2 worth of fentanyl at Vancouver airport 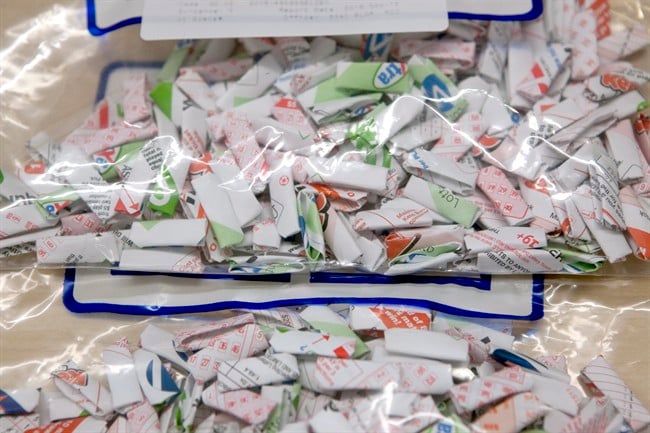 Over one million dollars worth of drugs including flaps of the deadly fentanyl drug destined for a Victoria drug trafficker’s address was seized by Victoria Police after being alerted by the Canada Border Services Agency, Thursday, December 1, 2016. THE CANADIAN PRESS/Chad Hipolito

VICTORIA – The Canada Border Services Agency has seized a package containing enough fentanyl that Victoria police say could cause a potential 725,000 overdoses.

The package intercepted at Vancouver’s airport was destined for a Victoria address and contained 1.45 kilograms of the deadly opioid, acting police chief Del Manak told a news conference where a variety of drugs packaged in plastic bags were displayed on a table.

Public Safety Minister Mike Morris said the shipment originated in China and he’s hopeful a recent agreement between the RCMP and the Chinese government will deal with “the impact that fentanyl is having not only in British Columbia but across Canada.”

“People need to be aware of the significant danger that these things present,” he said of the seizure that police have valued at about $1.2 million.

“We hear a lot of discussion in different circles about the recreational use of drugs, which is a term that, quite frankly, offends me.”

Staff Sgt. Conor King said the fentanyl was mixed with heroin and that nine people recently died within 11 days on Vancouver Island from the opioid that has killed hundreds of people across the country.

He said all of the drugs have not yet been analyzed to determine if any contain carfentanil, which is 100 times more powerful than fentanyl.

Multiple charges are being recommended against a 27-year-old Montreal man, and King said the man had been out on bail on previous drug charges.

“He seems to not have any local ties here, which would lead us to believe that he was here for the purpose of the drug trade rather than any legitimate purpose.”

Police said the fentanyl shipment led officers to another bust in nearby Saanich, where they found 6,052 individual doses of fentanyl-laced heroin, 6.2 kilograms of cocaine in powder and crack form and 1.2 kilograms of methamphetamine.

King said the people involved were not known to police, adding all the drugs that were seized were believed to be destined for Vancouver Island but that lower-level dealers could have distributed it to Vancouver and beyond.

“Every dose of fentanyl that’s on the street is a potential lethal overdose so taking 6,052 doses of fentanyl off the streets will hopefully save lives.”

The Canada Border Services Agency has also made three carfentanil seizures in the Pacific region this year.