'She had room in her heart for everyone and believed strongly that every person was to be valued and respected,' her family said in a statement 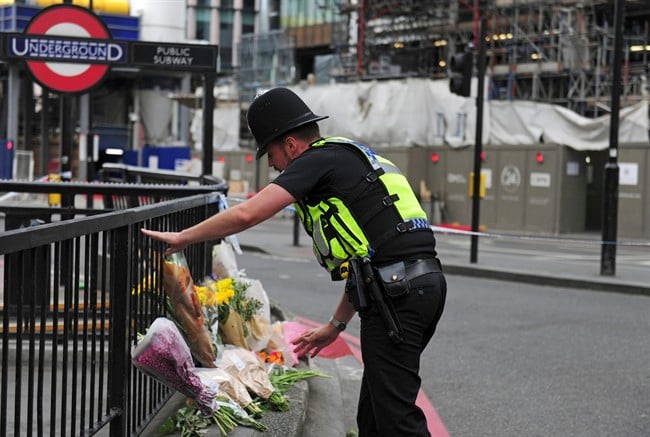 A police officer lays flowers passed to him by members of the public on the north side of London Bridge following last night’s terrorist incident, Sunday, June 4, 2017. (David Mirzoeff/PA via AP)

OTTAWA – A Canadian woman killed in the terror attack in the United Kingdom that left seven people dead was remembered Sunday as someone who had a big heart and respected everyone.

Family members said Christine Archibald, 30, from British Columbia was a victim of the attack on London Bridge and in a bustling market nearby.

The attackers, wielding blades and knives, then ran down a set of stairs into Borough Market where they stabbed people in several different restaurants.

The London attack and Britain’s shattered illusion of immunity.

Messages posted on Facebook by the brother and sister of Archibald’s fiance, identified as Tyler Ferguson, said the couple was on London Bridge when Archibald was struck and killed by a van.

“I can’t breath. You hear these things so often but it doesn’t seem real. Last night in London my baby brother lost the love of his life on the London Bridge. In a split second his entire life was ripped away from him,” Cassie Ferguson Rowe, Ferguson’s sister posted on Facebook.

Archibald’s family in Castlegar, B.C. released a statement Sunday through the Canadian government saying she worked in a homeless shelter before she moved to Europe to be with her fiance.

“She had room in her heart for everyone and believed strongly that every person was to be valued and respected,” the statement said. “She would have had no understanding of the callous cruelty that caused her death.”

The family asked that people honour her memory by making the community a better place.

“Volunteer your time and labour or donate to a homeless shelter,” the statement said. “Tell them Chrissy sent you.”

Kathy Christiansen, executive director of Alpha House in Calgary, said Archibald had worked at the non-profit until recently and that she will remain in the hearts of her friends and colleagues.

The young woman was a talented social worker and an “exceptional human being,” Christiansen said in a statement.

“Chrissy was a bright light to many, and her generosity, kind spirit and huge heart for her work in responding to issues of addictions and homelessness at the centre inspired us all.”

“Christine Archibald was a truly outstanding student who completed her coursework at Mount Royal in 2014 and officially received her Social Work diploma in 2015,” the Calgary university president said in a statement.

“Our deepest condolences go to her family and loved ones, as well as to members of our community who are grieving her loss.”

B.C. Premier Christy Clark issued a statement saying her thoughts are with the Archibald family, and with everyone who knew and loved Chrissy.

“As her family and province mourn, we must never forget who we are — and the diversity that makes us strong,” Clark said.

“The individuals who carry out these acts of hate want to change us. They want to sow fear and division. Ultimately, they want us to turn on each other. They will never succeed.”

Police in London have said the attack lasted about eight minutes. In addition to the seven people who were killed, at least 48 others were sent to hospital.

Police shot and killed the attackers, and 12 people were arrested in Barking in east London.

He said in a tweet that he was “heartbroken to learn that a Canadian is among those who lost their lives.”

Prime Minister Justin Trudeau said Canada would stand with the U.K. in the fight against terrorism.

“We grieve with the families and friends of those who have lost loved ones, and wish all those injured a speedy and full recovery,” Trudeau said. “Londoners and people across the United Kingdom have always displayed strength and resilience in the face of adversity. We recently witnessed this after the attacks in Manchester and in the Westminster area of London. This time will be no different.”

RELATED: The London attack: It’s getting harder to keep calm and carry on

Opposition leader Andrew Scheer said in a statement Sunday that Canada and the U.K. have historically stood “shoulder to shoulder” against threats.

“I do not want to see my children grow up in a world where they are afraid to go to the mall, or a concert, or travel the world,” Scheer said. “This is why Canada, and our allies, must be fully committed to confronting and destroying this terrorist threat.”

This is the third attack in Britain in as many months. Two weeks ago, a suicide bomber blew himself up at an Ariana Grande concert in Manchester, in northwest England, killing 22 people and injuring dozens more. In March, a British convert to Islam ran down people with a vehicle on Westminster Bridge, killing four before fatally stabbing a police officer on Parliament’s grounds.