Coal power to be phased out by 2030: Environment Minister

Nova Scotia gets some flexibility under coal power plan 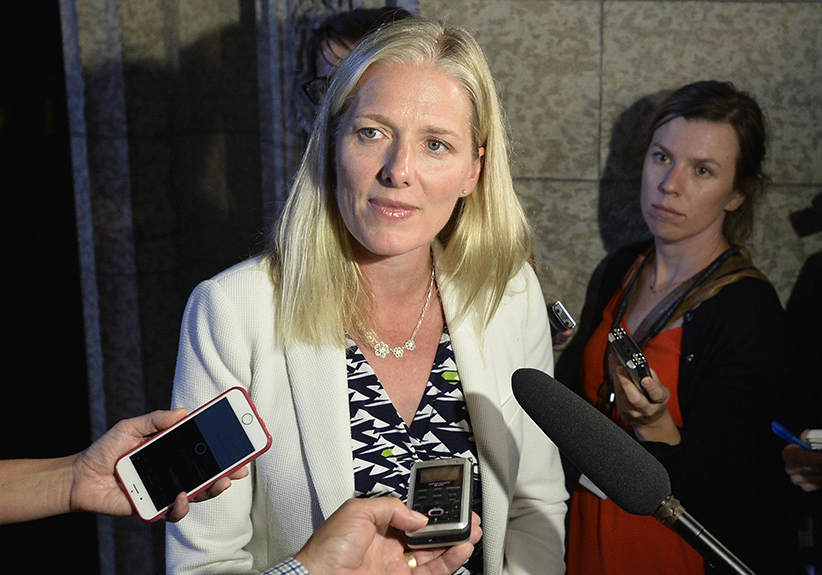 OTTAWA — The federal Liberal government once again earned the scorn of Saskatchewan’s premier Monday with the next phase of its clean-energy strategy: pushing provinces to either phase out or clean up their coal-fired power plants.

The goal of the Trudeau government is to ensure 90 per cent of Canada’s electricity comes from sustainable sources by 2030, up from 80 per cent now, Environment Minister Catherine McKenna said Monday.

Coal-fired units are among the largest sources of air pollution in the country, including sulphur dioxides, nitrogen oxides and mercury pollutants.

Under the new federal plan, provinces can choose to phase out coal entirely and replace it with lower-emitting sources — as Alberta is doing — or they can use carbon capture and storage technology, McKenna said.

At least in the case of Nova Scotia, however, the federal push seems like more of a gentle nudge.

The government is also permitting “equivalency arrangements” to support the transition from coal towards cleaner electricity sources. Nova Scotia will be allowed to use coal-fired plants beyond 2030 in recognition of the work the province has done to reduce greenhouse gases.

McKenna characterized it as working on tailor-made approaches to phasing out coal with the four affected provinces.

“Different provinces have different solutions,” she told a news conference in Ottawa. “We are making sure that the solutions make sense for ratepayers, for workers and for the residents of the province.”

Later in the day in Halifax, McKenna was alongside Nova Scotia Premier Stephen McNeil as he announced plans to adopt a cap and trade system for industry, with the details to be worked out by 2018.

The province opted for cap and trade after McNeil had made it clear that he wanted no part of a proposed carbon tax, saying it would be too expensive for his province’s mainly rural economy.

Saskatchewan Premier Brad Wall, another provincial leader who’s no fan of the carbon-tax idea, said his province would evaluate the environmental and economic impact of the federal announcement.

But he accused the Liberals of violating — for a second time — a commitment to work with the provinces on a pan-Canadian approach to climate change that would be discussed and finalized at a first ministers’ meeting next month.

“These actions have severely undermined the December meeting and have exposed the prime minister’s disingenuous commitment to federal-provincial collaboration,” Wall said in a statement.

The federal plan is expected to reduce greenhouse gas emissions by more than five megatonnes by 2030 — the equivalent of taking 1.3 million cars off the road. That’s in addition to the 10 megatonnes that Alberta’s early phase-out of coal represents.

“This opportunity will attract the investments required to build the clean-energy economy that will position Canada for great success in generations to come,” McKenna said.

Monday’s announcement came as the Pembina Institute released a report saying the phase-out of all coal-fired power facilities by 2030 would cut 10 years from a previously established federal timeline, which would have allowed some facilities to continue operating well past 2040.

Accelerating the national phase-out of coal-fired power to 2030 would avoid 1,008 premature deaths, 871 emergency room visits and nearly $5 billion in health and lower productivity costs between 2015 and 2035, the report said.

Canada is blessed with an abundance of hydro, wind and solar opportunities, McKenna said. “This has already positioned us as a global leader. We can always do better, though.”

Ottawa’s position stands in marked contrast to the signals from the incoming U.S. administration, which has indicated strong support for the coal sector.

McKenna said it is important to let the market know that Canada is moving to a low-carbon future. She noted France, Britain, the Netherlands, Austria and Denmark have all announced accelerated coal phase-outs.