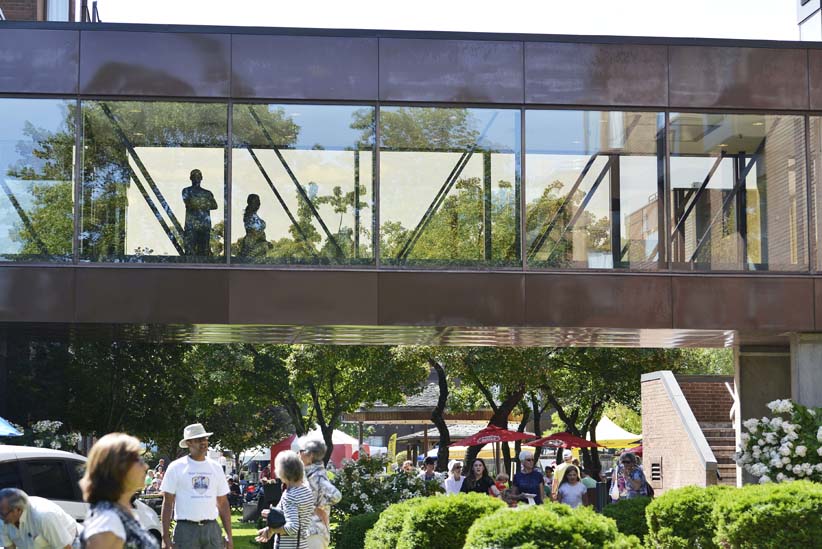 Haitian asylum seekers watch the Garlic Festival from a skybridge at the NAV Centre in Cornwall, Ont. (Photograph by Matthew Usherwood)

The Eastern Ontario Garlic Festival did not have a contingency plan. It was scheduled for the last Sunday of August on the lawn of a conference venue in Cornwall, where Ontarians would sample garlic sausages, garlic pancetta and garlic fudge, their nostrils sniff-sniffing the offerings of powdered garlic, smoked garlic and pureed garlic derivatives. Buskers would busk, corn would be husked and children would pet a pot-bellied pig.

However, two weeks before show time, festival director Brenda Nelson was told, “we have a problem.” Nearly three hundred Haitian asylum seekers would soon move into the hotel on site, she was told, while the military would erect tents to host potential overflow. When word spread, festival vendors started cancelling out of spite toward the migrants and locals suggested they wouldn’t attend, as the supposed family affair became intertwined with the politics of illegal migration. While the organizers fought for the show to go on, the garlic festival brought out remarkable resolve from local people who insisted that racial tolerance would prevail in their hometown.

Fate, says Nelson, landed them in this situation and tested her resilience. Nelson is a garlic grower who founded the festival three years ago with volunteers, expanding the line-up to include people selling honey, soap and Amish baking. In June, she determined this year’s venue: the lawn of the NAV Centre, a training facility for air traffic controllers with a hotel and meeting space for conferences and weddings. 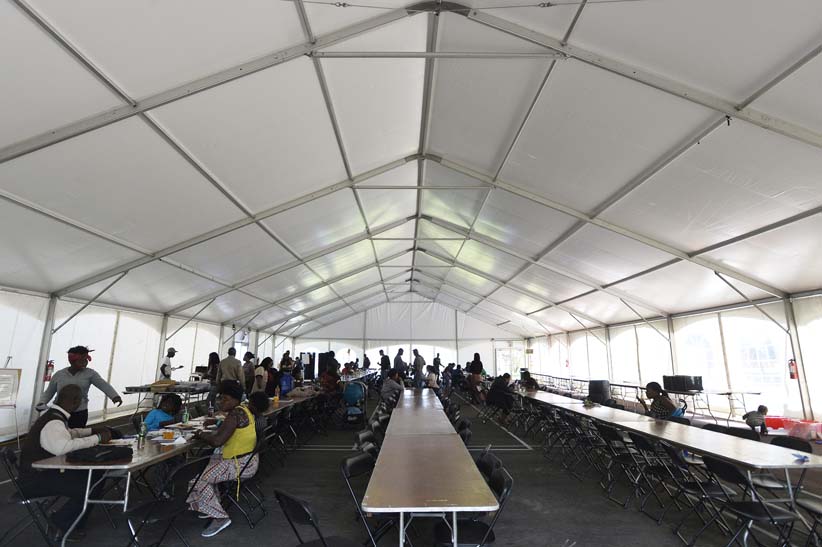 Montreal’s Olympic Stadium was already full, as more than 1,600 Haitians crossed the border from the U.S. in July, many at Lacolle, Que. In May, the U.S. Department of Homeland Security announced that the temporary protected status (TPS) for Haitians will end in January. TPS for people from El Salvador, Honduras and Nicaragua could also soon expire, pushing them north as well. On Aug. 18, federal authorities started busing asylum seekers from Lacolle to Cornwall’s NAV Centre. The military set up tents in case of overflow, though they so far all stay in the Centre’s hotel rooms, which surround the designated site for the garlic festival.

“All of a sudden I’m getting calls of people who are going to cancel,” Nelson explains. She says about one-quarter of vendors voiced concern like, “this is never going to work. Nobody’s going to come if all those asylum seekers are here.”

Councillors voted against giving city bus passes to the migrants, reasoning that the newcomers were not their responsibility. “It hurt my heart,” says Nelson. “After the earthquake, it was all warm and fuzzy—‘let’s send toothpaste and toothbrushes’—but when they’re on our land, [people are] scared,” she says. 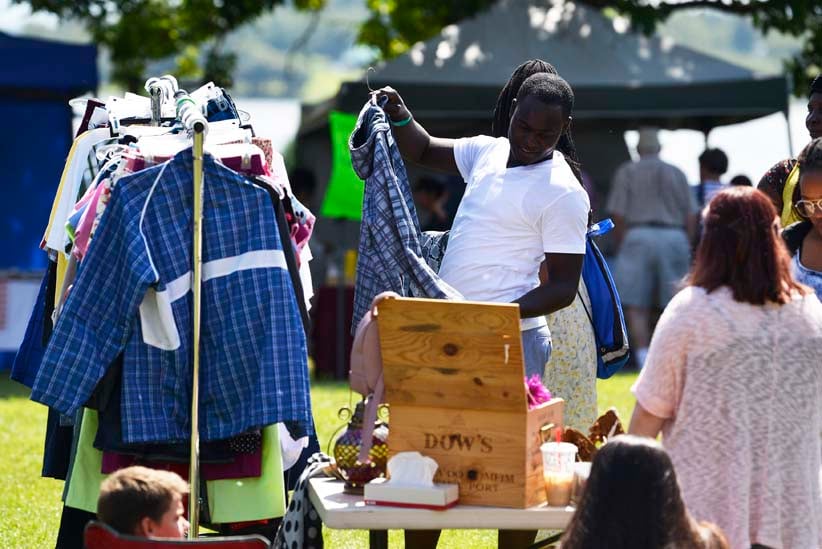 The 46,000 residents of Cornwall have come to share their city with a Sri Lankan population and many Western Europeans, and distribution centres for Wal-Mart and Shopper’s Drug Mart, call centres and lumber yards have become the primary economic engine after the Domtar paper mill closed in 2006. But locals may associate migrants from the American border with the city’s ongoing battle against gun and drug trafficking.

“Why aren’t you coming?” Nelson asked vendors who cancelled from the garlic festival. “Did you have an accident? Or are you prejudiced?” She sent out a letter saying vendors who cancelled without a “valid reason” would be disqualified from all future garlic festivals. She then went further to personally invite the refugee claimants to the event. She roamed the hallways of the hotel and introduced herself in French, suggesting they come and share Haitian food or dance on stage.

Groups of Haitians came, but retired farmer John Adams almost didn’t. “I’m not happy; I’m not mad, but I’m disturbed because I don’t have all the details,” he says. “I don’t know when our government will drive them back to Haiti or the U.S., but the sooner the better.”

RELATED: Will the Haitian asylum-seekers in Montreal get to stay?

As a volunteer who serves toast most mornings to isolated seniors, Adams says, “I’m a very generous person in every way, shape and form, believe me, but there’s a limit to everything.” He suspects most migrants have criminal records—“Why sneak through the woods? Bank robbers run through the woods because they’ve done something wrong”—and worries the newcomers will over-burden the health-care system, while his hip surgery has already gotten pushed back four times. He is also nationalist in his daily purchases: “We refuse to buy Chinese garlic.”

While Adams says the Haitians have “no founded reason” to immigrate, others argue they have few opportunities in Haiti. One 12-year-old at the festival, named Querel, describes his house collapsing in January 2010. He was watching Ghost Rider, his grandmother knitting, when bricks started to fall. “I almost cried, but I didn’t because I’m a real man,” he says. A brick fell on his father’s knee (“he could still walk because he’s a real man”), and “somehow we survived. We got to sleep on the road for a couple days, and then, and then, and then! … President Obama put out some stuff called TPS … Trump kept deporting Haitian people … you know when your mom cries and it makes you want to cry? I was the only one who didn’t cry.” 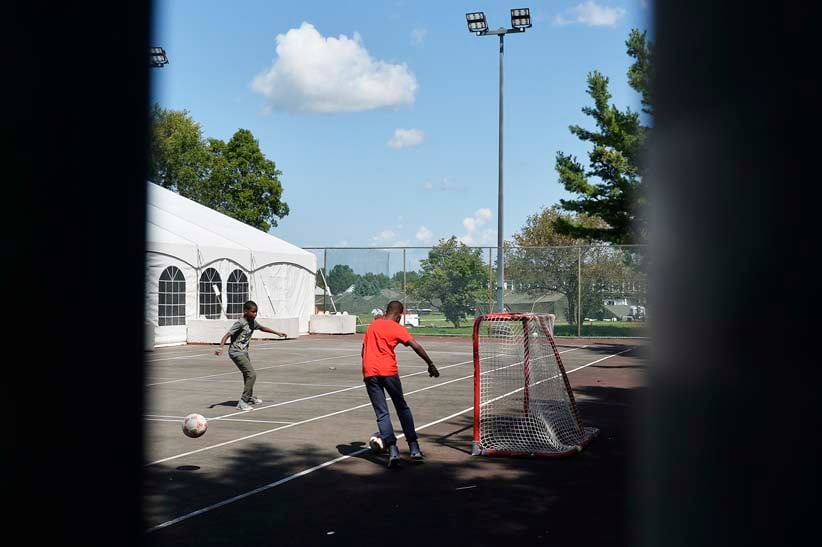 Many Cornwallers sympathize. Vendor Marilyn Grignon has tried to teach friends the facts. “My friends think they’ll bring some disease,” she says. “No, they’ve been in the States for years. They’ve got the vaccines. Get the story straight if you’re gonna get pissed off.” Another Cornwall resident, Marie Morrel, grew up feeling unwelcome herself because her father was Acadian, her grandmother Indigenous and her great-grandmother Roma, and her peers ridiculed her resulting dialect. “It has become my quest to make sure people understand the definition of human,” she says.

Come closing time of the festival, when the vendors stuffed their leftover garlic bushels into hatchbacks, Nelson called across the empty lawn to one of the Haitian women named Tamara. She’d befriended Tamara closely enough to extend a hand and fix a wayward strap near the woman’s bra. “We call them ‘the extraordinary visitors,” Nelson says. “They’re extra, and they’re ordinary. We’re all freakin’ human.” Once more, Nelson affirms, “this is not a hassle. It’s a gift.”