The field known as "attribution science" might have the answer 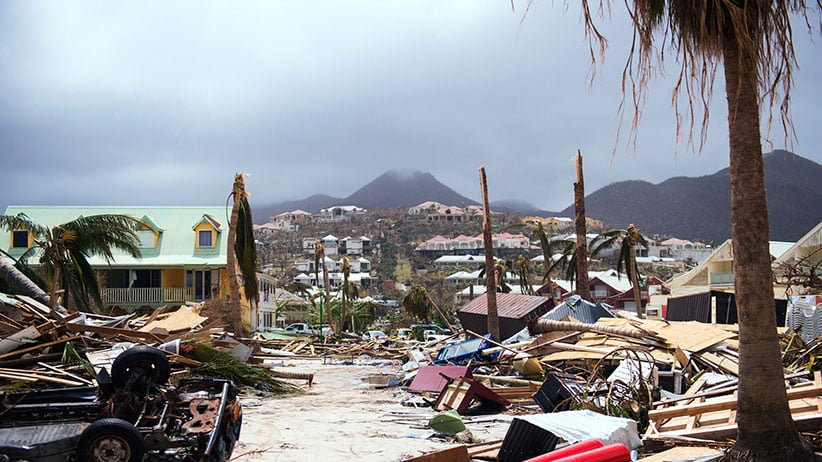 As Houston, Texas starts to pick up the pieces from the destruction of Hurricane Harvey, while residents in the Caribbean are already reeling in the aftermath of Hurricane Irma’s wake, many are wondering the role climate change might have played in these disasters—even if there are those who are less-than-receptive to the discussion.

“This is not the time to be having this conversation,” said Rick Perry, the former Texas governor, now U.S. Energy Secretary under Donald Trump, in an interview with CBS over the weekend. “”Everyone wants to run to the climate-change debate, but that is very secondary at this particular time.” Perry, who has repeatedly denied that humans are the primary cause of rising CO2 emissions, might question climate change’s role—and the right time to start looking for answer.

But for those wishing to know if there are indeed connections between these extreme weather disasters and human-caused planetary warming, a good place to start would be the University of Oxford’s Environmental Change Institute.

For years, the institute has been using “attribution science” to help determine what part climate change plays in individual events like these floods and heat waves.

While the institute has yet to finish a study on either Hurricanes Harvey or Irma, Maclean’s spoke with Friederike Otto, deputy director of the Environmental Change Institute at the University of Oxford, about whether climate change could have had an impact on Hurricane Harvey, how attribution science works, and how definitive they can be about their findings.

Q: I understand there’s no completed study yet, but is it possible Hurricane Harvey could be attributed to climate change?

A: Yes. In particular, if you look at the amount of rainfall, it’s very likely.

We did a study on the extreme rainfall in Louisiana last year and we found a strong signal from climate change regarding inland rainfall. From a thermodynamic point of view, that’s what you expect in a warming world. If you have a warmer atmosphere, it can hold more water vapour and so you get more extreme rainfall. But it’s much more complicated if you want to know the frequency or intensity of hurricanes.

Q: What is attribution science, exactly, and how does it work?

A: We’ll never be able to say an individual weather event never would have happened without climate change because all extreme weather events are unique and have a multitude of causes. But what we can do is look if the likelihood of extreme weather events occurring has changed due to an external ‘forcing’ [factors that affect the Earth’s climate], like the amount of greenhouses gases in the atmosphere or volcanic eruption.

If there’s extreme rain in Houston, for example, we would ask what is the likelihood of a rain event exceeding a certain threshold occurring in Houston given the forcings. Then we’d repeat the experiment asking the same question but removing the anthropogenic forcing to ask, what would the likelihood be of an event like this occurring in a world without climate change?

If you take a die and you roll a six 10 times in a row, you get suspicious that something is wrong with the die. In order to be able to find out, you would need to roll the die hundreds of times to really see if the statistics of rolling a six is different from what you’d expect. Then you could determine if the die is loaded. It’s the same thing we do in event attribution. We simulate what is possible for weather over and over again. With a die, you have the advantage of knowing what the probability of rolling a six is, but with a climate system, we don’t know that, so we also have to simulate the world that might have been.

Q: How quickly can you find out the impact of climate change?

A: For something like hurricane Harvey, or hurricanes in general, that’s at the cutting edge of the science at the moment. It won’t be very quickly because we really have to improve the methodology.

For heat waves, we’ve done it several times. For extreme rainfall, we’ve done it frequently. But for hurricanes, you need very high-resolution climate models and they are rare. There are very few modelling centres in the world, which makes it more difficult.

Q: But I understand it’s relatively fast. Fair to say a heat wave might take you two or three weeks to find out, while a hurricane will take two to three months?

Q: With Hurricanes Harvey and Irma striking back-to-back, does the accumulation of weather events factor into your parameters?

A: If you define the event as just the amount of rainfall in a season, you get a very different answer of a hurricane taking one path and another hurricane taking another. In theory, it’s possible to look at these compound events, but you’d need enormous ensembles of climate models. It’s possible, but it’d be incredibly expensive.

Q: Is there an extreme weather event that your team—as much as one can—definitively attribute to climate change?

Q: Does your team ever get flak from climate-change deniers?

A: Surprisingly little—at least me personally. That’s true for most of the team. I can’t say why. Other people at the University of Oxford get quite a lot.

Q: Has anyone challenged your scientific methods?

A: Other scientists have questioned the usefulness of doing rapid attribution studies, doing it before peer-review, but we have shown in several peer-reviewed publications that our results hold. There are still people who think it’s not useful, but no  scientist has seriously questioned the methodology.

Q: Will this use of attribution science one day be able to predict extreme weather events instead of looking at the past?

A: At the moment, the method can be applied in a predictive way. The first step is assessing the risk of something occurring in today’s climate, which means within the next 5-10 years. It already had this predictive element. We don’t do seasonal forecasts, but it’s more a slightly longer term [forecast]. Some people are working on this, but only recently have the large climate model ensembles needed become available.

Q: Lastly, it says on your Twitter profile that you’re a “wannabe weather geek.” Why wannabe?

A: I’m not a meteorologist by training. I’m a physicist, but I know a lot about the large-scale climate system. There are people who know much more about the meteorological details. I’m more focused on the big picture.