Countdown to Sochi: The paradox of biathlon 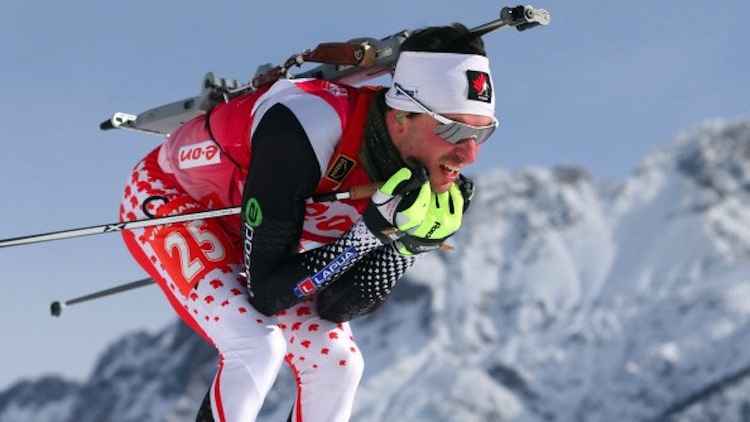 As a kid, Jean-Philippe Le Guellec did a lot of cross-country—and he found it boring. He continued because he discovered he could combine it with shooting a rifle. And that was how Canada’s top biathlete got his start in the sport. It makes sense. In fact, it makes you wonder why anyone would just cross-country ski, knowing you could be taking breaks to shoot a rifle.

“Anybody who gets to learn about biathlon is definitely blown away by the complexity and the beauty of it,” Le Guellec says. “You have cross-country skiing on one hand, which is very technical and all cardio. On the other hand you have shooting, which is the polar opposite. You need to lower your heart rate and be extremely precise to shoot down your targets. You add in all the skiing times, the shooting times, and missed targets, and it really changes everything throughout a race. Anything can happen.”

Miss a target in a sprint race, and an athlete is required to ski a 150-metre penalty loop. “It takes about 25 seconds, and within that time you can drop 20 places,” Le Guellec says.

“Patience is key because it can be really frustrating at times,” he adds. “We’re skiing pretty much full-tilt and coming to the range, calming down by doing breathing techniques, shooting five targets and then taking off. You get on the mat and shoot your five targets and get off the mat. The fastest shooters are doing that in 19–20 seconds, which is extremely fast.”

If shooting and skiing doing pique your interest, know that Le Guellec has a good shot at the podium in Sochi. After a sixth-place finish in Vancouver in the 10km sprint—the best-ever finish by a Canadian man—he says he’s faster than ever, having since rebuilt his skiing technique.

Should he step atop the podium, Le Guellec would be only the second Canadian to do so, and the first since three-time medallist Myriam Bedard won double-gold in twenty years ago.

“I’m confident,” he says. “It would be my career’s work. I’m putting everything in place for that to happen.”

Biathlon competition opens at the Olympics on Saturday, Feb. 8, with the men’s 10 km sprint at the Laura Cross-Country Ski and Biathlon Center.