The province has the highest rate of active cases in Canada and could see as many as 4,000 new cases a day by May 22 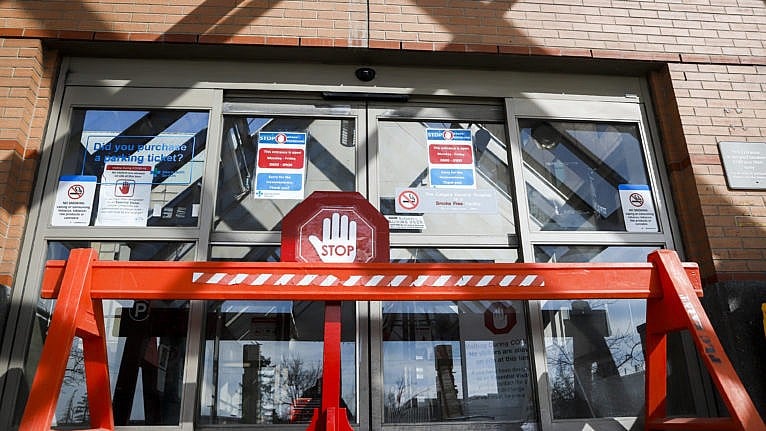 An entrance is blocked to the Peter Lougheed Centre hospital so staff can screen essential visitors who are the only visitors permitted in Alberta hospitals as part of COVID-19 precautions in Calgary, Alta., Thursday, April 9, 2020. THE CANADIAN PRESS/Jeff McIntosh

On Saturday, hundreds of fans packed bleachers just outside Bowden, Alta., for the “No More Lockdown Rally Rodeo.” Few wore masks and the police made no effort to stop the event. That same day that Alberta reported two new pandemic records: 2,433 cases of COVID-19 and a test positivity rate of 11.9 per cent.

Also on that day, the province had more than double the per capita rate of active cases than second-place Ontario, according to data crunched by CBC’s Robson Fletcher. And those cases have driven Alberta’s seven-day per capita rate to a new record: It’s now 440.5 per million population, more than any other province or state in North America; in contrast, hard-hit Ontario has a rate of 247.7 per million population.

At the end of April, as non-emergency surgeries were cut by 30 per cent in the hotspots of Calgary, Edmonton and the North Zones, hospitals were being briefed on triage procedures should ICUs become overwhelmed.

“Absolutely frightening,” is how Dr. Noel Gibney, who spent four decades working in ICUs in the province, describes the current situation.

For a while after the second wave of cases subsided in February and into March, the situation in Alberta looked relatively good, at least on the surface. Hospitalizations were declining, as were the number of new cases. Then, as the province relaxed its public health measures, the number of COVID-19 cases started to go up, first slowly, then faster and faster as the more infectious variants of concern (VOCs) took hold in Alberta, just as they had done already in Ontario. “If you reopen too much or too soon, inevitably what has happened was going to happen,” says Gibney, a professor emeritus at the department of critical care medicine at the University of Alberta. By the beginning of April, the VOCs accounted for half of all cases in Alberta. At that point, the rate of spread became exponential, doubling every seven days.

“There’s no question that the limited restrictions that the government has put in place has made some difference, and if we were dealing just with the old, wild kind of virus, [they] probably would have been enough to keep things in control,” he says. But he thinks those restrictions aren’t enough to deal with the VOCs, which are causing case levels to now double about every 20 days.

While the VOC situation looks similar to that facing Ontario around a month ago, there are two big differences, Gibney says. “Ontario reopened [its economy after the second wave] from a higher baseline of cases per population than Alberta did.” And that meant that Ontario’s hospital system wasn’t able to significantly reduce its COVID-19 patient load before being hit with a third wave of new admissions. In contrast, Alberta was able to reduce hospitalizations from more than 900 patients in late December to less than 250 in early March, while the number of COVID-19 patients needing ICU care dropped to below 40. So, while hospitalizations are increasing—on the weekend, the number of COVID-19 patients in Alberta’s ICUs topped 155, more than the peak of the second wave—that level isn’t yet as high, relatively speaking, as in Ontario.

For Gibney, the other difference between the provinces is in the attitude of the governments. Both are led by populist premiers, but while Premier Doug Ford eventually put in place enough restrictions to start bending its epidemic curve, that action hasn’t yet occurred in Alberta. “Our government finds itself almost emotionally unable to do the hard work that is required to actually get the pandemic under control,” he says. “The premier has come under intense pressure from his own supporters [to choose] the weak restrictions that he’s put in place. So the question that I think has to be asked is, ‘Will he have the courage to do what’s necessary, even though it may actually lead to his eventually being replaced as leader of the party and premier?’”

Experts worry that Kenney is running out of time to make such a choice, like he eventually did for the two previous waves. While the government doesn’t release pandemic projections, modelling done by Gosia Gasperowicz, a University of Calgary Ph.D. student, shows that Alberta is “on exactly the same steep upward trajectory as Ontario,” and could see 4,000 daily cases by May 22 (it was an average of 1,944 a day in the past week.) In addition, her projections show that COVID-19 ICU capacity is doubling every three weeks, meaning that those triage protocols may be needed in late May.  For both Gasperowicz and Gibney, the current situation cannot be controlled through vaccinations alone.

While acknowledging that “too many Albertans are ignoring the rules we have in place,” Kenney is set to unveil new restrictions on Tuesday. Experts wonder if they will be tough enough to bend the epidemic curve. “If we want to avoid the disastrous situation at the end of May, then we might have a week or 10 days at the most [for Kenney to act],” Gibney says. “But beyond that, what’s going to happen is going to happen regardless of what he does.”