What can Canadians do after getting the first dose of the COVID-19 vaccines?

Vaxx Populi: Experts say between variants and many people still being unvaccinated, we need to remain vigilant. But we can feel assured of not becoming seriously ill. 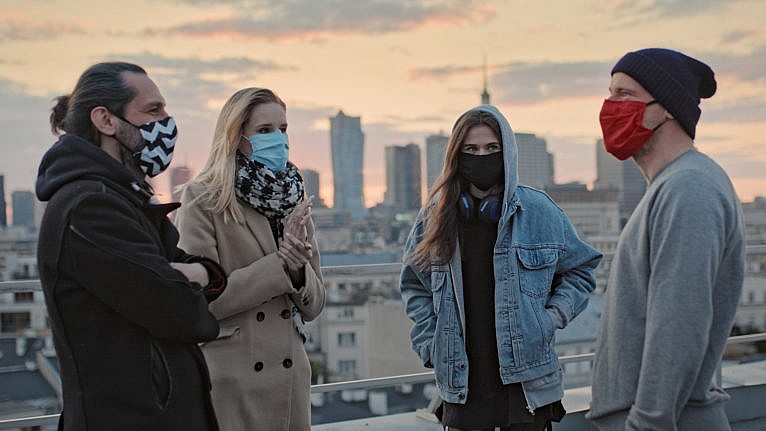 Warmer weather means we can get a little bit closer—outdoors. But masks are still recommended, as is avoiding indoor contact with people outside your household.

Spring is shaping up to be mass vaccination season in Canada. This week, a record two million doses of COVID-19 vaccine arrive to start what is an all-out push to get as many first doses into as many Canadians as possible. By the Victoria Day weekend, the federal government estimates that more than 18 million doses will have arrived, and that number tops 21 million with the three million AstraZeneca doses from our contracts as well as a loan from the United States expected by May.

As more and more people get their first doses, the inevitable next question being asked is, “What can I do now?” especially as it may be up to 16 weeks before they get their crucial second doses.

Dr. Gerald Evans, the chair of the division of infectious diseases at Queen’s University in Kingston, Ont., is asked that question “probably about two dozen times a day,” he says with a laugh. Like most things pandemic-related, there’s no short, snappy answer. But, unlike many other questions, there is good news.

RELATED: Everyone hates a queue jumper. But are Canada’s current vaccine queues fair?

“I tell people, ‘You can relax a bit,’ ” he says. “You can be a lot less anxious, worried and stressed about the fact [possibility] that if you get COVID, something bad is going to happen,” he says. “You’re going to be protected, even with a single dose, likely from getting severe illness that would make you sick and put you in hospital or maybe result in your death.”

Though he cautions that most of the data on the reduction of viral transmission is based on a two-dose regimen, there is now some first-dose data, especially from Israel and Britain—the latter of which began its own “first-dose-first” rollout much earlier than Canada did—which show big drops in hospitalizations and deaths, even after that first dose. Indeed, when a new outbreak at the Cottonwoods Care Centre in Kelowna, B.C., occurred in early March, the residents who had received at least one dose were spared severe symptoms, public health experts reported.

Right now, there are three interacting issues for those who have received their first doses to consider: the effectiveness of the vaccines themselves, the sharp increase in variants of concern (VOCs) and the better weather.

RELATED: ‘Who are you bubbling with?’ How COVID-19 has changed language over the past year

Getting a shot doesn’t mean instant protection. Some of those Cottonwoods residents got COVID-19 because their doses hadn’t reached maximum effectiveness yet. For first doses, that occurs 12 to 14 days after getting the shot, Evans explains. At that point, mRNA vaccines produced by Pfizer and Moderna achieve an efficacy of around 85 per cent, while the viral vector vaccines by AstraZeneca and Johnson & Johnson have efficacy of closer to 70 per cent (data for the latter two was recorded when VOCs were more prevalent than during the trials of the mRNA vaccines).

Just don’t get complacent, experts warn. Public Health England found a “notable” rise in COVID-19 infections in people immediately after they received their first shots. A similar trend occurred in Israel. “Looking at both strands of research—from Israel and the U.K.—it’s reasonable to suggest people are letting their guard down after they have their first dose,” warned James Rubin, a professor of psychology of emerging health risks at King’s College London, in the British Medical Journal. “The research has shown that immediately after a first jab people are more likely to be flouting social distancing, meeting people outside their household or bubble—and meeting them indoors.”

While some people want to hear, “Oh, I’ve got my vaccine, I’m in the free-and-clear,” Evans also says that people given first doses still have to be careful, as they can still spread the virus to others who might suffer serious consequences: “The kinds of people we’re seeing right now in the hospital with severe illness are, in fact, younger people, and they’re not vaccinated.”

At the same time, the variants of concern—particularly B.1.1.7, which is more infectious and deadlier than the older strains—are a growing threat in Canada as well countries with more advanced vaccination rollouts. On March 21, Dr. Ashish Jha of Brown University pointed out that the United States has been stuck at 50,000 new cases daily for the past two weeks even though another 20 million people were vaccinated during that time. The likely reason is that the relaxing of public health measures is helping the variants spread and grow, which counteracts the positive effect of the vaccines.

Yet, Mother Nature may help curb Canada’s third wave as well allow people to enjoy the benefits of vaccinations. Because of an effect called “seasonal forcing,” coronaviruses, like COVID-19 and the common cold, are less likely to be transmitted in the warm, humid weather of spring and summer, than they are in the cold, dry weather of winter. As well, “outdoor transmission is extraordinarily uncommon,” Evans explains. “When you’re outdoors, there is essentially almost infinite ventilation. Even short-range aerosols are quickly reduced to concentrations that don’t transmit infections.”

There are so many benefits that Evans thinks family barbecues and outdoor visits to relatives in long-term care homes should be fine in the warmer weather, though the now-habitual safety precautions should continue, such as including masks. “If you’ve got a mask on, you can be within three feet of each other [while outdoors],” he says. He’s less enthusiastic, however, about being in outdoor environments that have some sort of closure, such as a wall to stop wind from bothering customers on a restaurant patio, as some of these can “almost create a bit of an indoor environment outside.”

His final message is to hold on, equating our upcoming vaccinated summer with the open water seen beyond the ice that still hugs the shores of many lakes and rivers in Canada: “You should still stick to your household, your bubble; wear your mask when you’re out in public and you’re out at a shop and store; and do all those good things that we’ve been doing now, unfortunately, for almost a year,” he says. “Until we get that second dose into lots of people. Because it’s when that happens that things get back to normal.”