An expert group has recommended using letters of the Greek alphabet like Alpha, Beta and Gamma as 'easy-to-pronounce and non-stigmatizing labels' for COVID variants 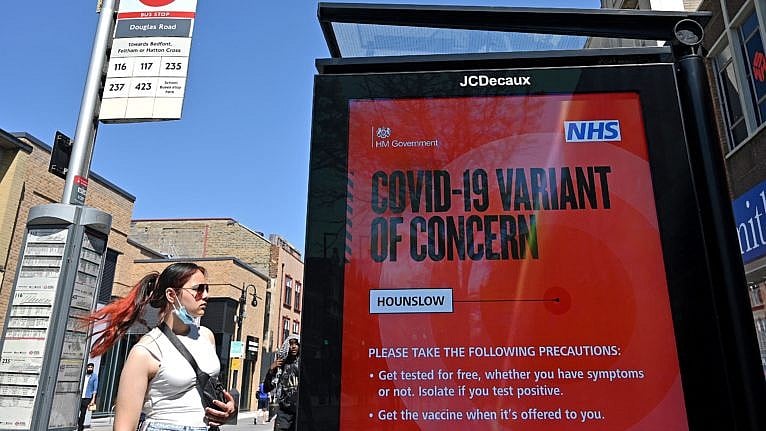 A woman waits at a bus stop by a sign warning members of the public about a "Coronavirus variant of concern' in Hounslow, west London on June 1, 2021. (Justin Tallis/AFP via Getty Images)

On Monday, the World Health Organization revealed that an expert group, tasked with considering “easy-to-pronounce and non-stigmatizing labels” for VOCs as well as variants of interest, had recommended using letters of the Greek alphabet, i.e., Alpha, Beta, Gamma. Those letters would be “easier and more practical” for non-scientific audiences, the WHO says.

“This is a huge relief because the VOC nomenclature and punctuation forced using ‘first identified in country’ names as shorthand!” Saxinger tweeted after the WHO announcement.

Heidi Tworek, an associate professor at the University of British Columbia, also applauds the WHO’s naming change. “Make it easy,” says Tworek, whose speciality is health communications and history. “In our culture, names are easier to remember than numbers.” (How many of us even know our best friend’s phone number any more, what with shortcut contacts in our cellphones?)

The new non-scientific names for the top variants are:

RELATED: What we know about the COVID variant first found in India

The other, far more serious reason, for this naming shift is the rise of anti-Asian racism. Since the start of the pandemic, brutal attacks in cities across North America have been directly linked to people identifying COVID-19 as the “Chinese virus.” Anti-Asian hate crimes jumped from 12 incidents reported to the Vancouver police in 2019 to 98 in 2020. Racism and intolerance can also be seen in how some people are scapegoating Asians and other persons of colour for the variants developed in their countries. “Did we see the stigmatization of British people abroad? No,” says Tworek, who is from Britain. But the B.1.617 VOC has led to extended bans on flights from India, including one imposed by Canada, as well as anti-Indian discrimination, even after the variant was well established in dozens of nations around the world. (Plus, VOCs could very well have originated in countries other than those where they were first identified, particularly as there are so many places where genomic sequencing is rare.)

As Tworek writes in a recent article, “Why disease names matter,” published by the Royal Society of Canada: “By the nineteenth century, European imperialism had heightened some of the anxieties about the supposed origins of infectious disease and transposed those anxieties onto Africa and Asia…Of the four large flu pandemics since 1889, three received monikers implying that the disease originated in Asia, though more often East Asia: the Asiatic flu of 1889-90, the Asiatic flu of 1957-58, the Hong Kong flu of 1968-69. The Spanish flu of 1918-20 was the exception that proved the rule. The name does not appear to have provoked outbursts against Spaniards.”

RELATED: How soon are second doses coming for Canadians, and who will get them first?

Still, Tworek wonders if it’s too late for people to drop the geographic names for VOCs, as such place-based naming has already been around for half a year. She points out that, in December, Pfizer and BioNTech announced that their COVID-19 vaccine would be branded as Comirnaty (“a combination of the terms COVID-19, mRNA, community and immunity”), at least in the European Union. Yet, five months later, it’s still called the Pfizer vaccine.

Some aren’t sold on the new naming system. “Supposedly this is going to make it easier for the public…uhhhh,” tweeted Sabina Vohra-Miller, a Toronto-based scientist. “Did the WHO even speak to the public before releasing this?!”

There also could be one small issue with the new naming protocol. When mulling over whether Greek letters should be used, Dr. Saxinger wondered if fraternities and sororities would get upset, given many use those letters in their names. When asked about that issue, Tworek just laughed: “Not a top of mind concern for me.”

FILED UNDER: COVID-19 in Canada Editor's Picks Variants of concern