Ontario has paused AstraZeneca. So, can I get my second dose sooner?

Vaxx Populi: Ontario and Alberta have stopped giving first doses of AstraZeneca. What does that mean for those who've already had one? 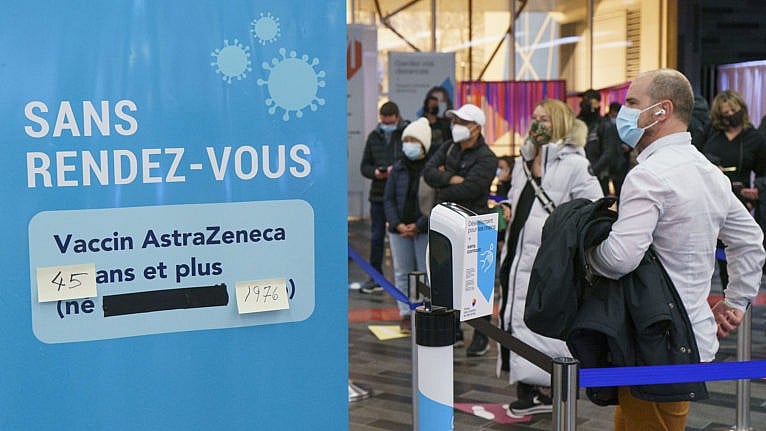 People lining up at walk-in COVID-19 vaccination clinic to receive the AstraZeneca vaccine in Montreal, on Wednesday, April 21, 2021. THE CANADIAN PRESS/Paul Chiasson

UPDATE, May 21, 2021: Ontario announced that it would begin booking appointments for second doses of AstraZeneca, beginning with those residents who got their first in March. The government says most can get a second dose 12 weeks after their first rather than the usual COVID-19 dose interval of up to 16 weeks.

Virtually all of the 2.3 million doses of AstraZeneca COVID-19 vaccine in Canada are in the arms of Canadians. Ontario has just 50,000 doses left out of its 900,000 allotment. Alberta has 8,200 doses remaining after the province gave out shots to 225,000 Albertans, while Quebec has all but exhausted its supply. So when Ontario and Alberta announced on Tuesday they were going to stop giving AstraZeneca vaccine as first doses, a lot of people immediately asked the same question: What the heck happens next?

Alberta’s medical officer of health Dr. Deena Hinshaw explained that one of the reasons was that the province doesn’t know when future supplies will come and wants to conserve its remaining supplies for second doses. Ontario’s medical officer of health Dr. David Williams said his province was postponing first doses “out of the abundance of caution” because of rising numbers of a potentially fatal blood clot condition known as vaccine-induced thrombotic thrombocytopenia (VITT) reported in those given the AstraZeneca vaccine.

Though experts explain that the risk of getting VITT is extremely rare, a higher number of cases have been detected through post-vaccination surveillance systems around the world. So, while Canada’s rate had been around 1 in 100,000 as of the end of April, some European nations are now reporting a risk of VITT at around 1 in 26,000.

Why is the VITT risk ratio changing?

First, it can take a while for possible adverse events to work their way through national and international surveillance reporting systems and for researchers to find patterns in the data. Around 20 million doses of AstraZeneca were administered before the first cases of VITT were publicly identified in mid-March. And it took around six weeks for Canada’s first case to be reported in mid-April. Now, as front line medical staff are looking for symptoms of VITT, cases are being reported faster, and the ratios are updated. For instance, reports of new cases of VITT in Ontario were received by the government late on Monday, officials explained. And that new data changed the risk ratio from one case of VITT per 100,000 doses to one in 58,000.

In Scandinavia, which has a world-famous system for gathering and interpreting health data, the ratios are even lower. Dr. David Fisman, an epidemiologist at the University of Toronto, told Maclean’s that Norway, which had reported a ratio of one case of VITT to every 26,000 administered doses has now seen that ratio drop to one in 16,000.

What is the risk of VITT in a second dose of AstraZeneca?

Right now, the risk of VITT associated with second doses of the AstraZeneca vaccine is based on data from the United Kingdom, which has administered tens of millions of doses. According to data from Britain, that risk is roughly one in a million for those who have received second doses, (six cases in 5.9 million second doses.)

Will people be assigned AstraZeneca or another vaccine for their second doses, or will they get to choose?

That issue is being worked on right now by governments. As an Ontario official explained in a briefing to media, there are a lot of factors to weigh, including the shipment schedule for second doses, the 16-week dosing interval, concerns about VITT for those getting second doses as well as an upcoming study from Britain that is examining the safety and effectiveness of mixing-and-matching COVID-19 vaccines.

Earlier this year, Oxford University started a study to see what would happen if people were given one dose of a viral vector vaccine (AstraZeneca) and another dose of a mRNA one (Pfizer). It’s called the Comparing COVID-19 Vaccine Schedule Combinations trial, or the Com-COV vaccine trial in short. And as more vaccines were approved, Oxford started a second study (Com-COV2) examining combinations of even more viral and mRNA options, including Moderna.

Theoretically, using a mix-and-match system may produce a better immune response. “Think of vaccination as presenting our immune system with a red flag—here is something you should be on the lookout for,” Dr. Alan Bernstein, CEO of CIFAR, a Toronto-based global research organization, told Maclean’s in February. “And so, if you go with the mRNA vaccine first, you’re going to activate one branch of our immune system.” Bernstein suggests thinking of this first vaccine as our “air force.” Then, he says, you introduce one of the viral vector vaccines a couple of weeks later, and it tells the immune system: “‘You saw this guy before, but I’m going to present him in a different format,’” says Bernstein. “And so it’s going to activate a different branch of our immune system. Think of it as our navy. And so now you have the air force and the navy activated and so you’ve got a double threat against this incoming virus.”

Results of the initial Com-COV study looking at AstraZeneca and Pfizer are due any day. Until they can see those results, governments have to assume that those who got first doses of AstraZeneca will get second doses of the same vaccine.

When are more AstraZeneca doses arriving?

On Wednesday, just after Maj.-Gen. Dany Fortin announced that 655,000 doses of AstraZeneca will arrive at some point in May, Ontario revealed that the shipment would be distributed to the provinces next week, with Ontario’s share being 254,500 doses. As well, all those doses arriving in Ontario will be allocated for second doses.

Can we speed up the administration of second doses?

There is a clock ticking on those AstraZeneca doses still in vials. They arrived in a shipment of 1.5 million doses from the United States, and, in an April 5 press conference, Fortin explained that two-thirds of the doses in that shipment expire in May with the rest expiring in June. (On Wednesday, Ontario officials confirmed the expiration timing.)

Many Canadians are more than willing to get those second AstraZeneca doses before they have to be thrown out, if the reaction on social media is any indication. But at the same time Ontario officials announced the new shipment of AstraZeneca doses, they also reiterated that the current interval of up to 16 weeks between doses would be maintained. As well, the officials said that as all first-dose vaccinations are recorded in a provincial database, that they would be making sure residents who haven’t been scheduled for second AstraZeneca doses get those appointments booked through the same channels (such as pharmacies or clinics) as those used for getting their first doses.