Confused by NACI's AstraZeneca recommendation? Why the first shot offered is still the best shot

Vaxx Populi: NACI described mRNA vaccines as "preferred," but the protection all vaccines—including AstraZeneca—offer from COVID is 'immensely higher' than the risk of blood clots 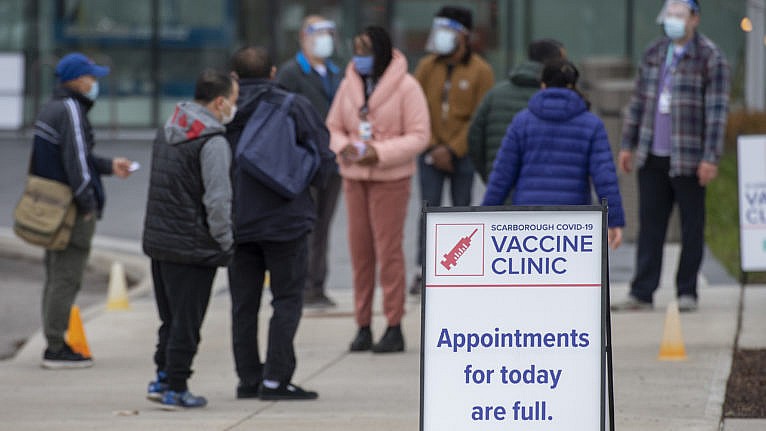 Visitors arrive at a pop up COVID-19 vaccine clinic at David and Mary Thomson high school in Toronto on Thursday, April 29, 2021. Hundreds of people lined up through the night in the hard hit community. THE CANADIAN PRESS/Frank Gunn

You know those incidents and issues that somehow wind up occupying a disproportionate amount of time? The condo owner who always has a multi-part query at a meeting, or a simple formula that just doesn’t want to behave on an Excel spreadsheet?

In Canada’s vaccine rollout, that tall poppy is the AstraZeneca viral vector vaccine. First, the age of those eligible was limited to those under 65. Then, it was expanded upward. Then came concerns that the vaccine may be linked to a rare form of blood clots associated with low platelet counts in a condition named vaccine-induced prothombotic immune thrombocytopenia (VIPIT or VITT). Because of the potential risk, the National Advisory Committee on Immunizations (NACI) recommended AstraZeneca for adults 55 and older before dropping that down to 30 and older.

Then, on May 3, as NACI released detailed COVID-19 recommendations, what caught everyone’s attention was when the committee’s experts said that mRNA vaccines, such as those by Pfizer and Moderna, “are the preferred vaccine,” ahead of AstraZeneca and Johnson & Johnson. Later, in an interview on CTV, Dr. Caroline Quach-Thanh, NACI’s chair, went further, saying, “If, for instance, my sister got the AstraZeneca vaccine and died of a thrombosis when I know it could have been prevented and that she is not in a high risk area, I’m not sure I could live with it.”

RELATED: Why some people feel COVID vaccine side effects and others don’t

After months of guidance to take the first vaccine offered, the advice seems to have shifted: those at higher risk, either living in hot spots or essential workers, get the AstraZeneca vaccine even though it comes with a risk of VIPIT, while those able to work from home may want to wait until they can get a mRNA vaccine.

Social media exploded. Tamara Hinz, a psychiatrist in Saskatoon spoke for many:

This has led to a slew of follow-up questions, not only about NACI’s recommendations, but also about the millions of Canadians who have received first doses of AstraZeneca and are wondering what they do next.

When asked on Monday if NACI’s changed recommendations goes against all the “take the first dose available when you’re eligible for a vaccine” advice, Dr. Shelly Deeks, NACI’s vice-chair, responded that “the recommendations have evolved” as they learned more about safety issues regarding the viral vector vaccines and their possible link to VIPIT. “This adverse event is very rare,” she explained. “We’re still learning more about it and we don’t know how common it is. Initially, we thought it was about one in a million. As more data has become available, now it’s still very rare, but now it looks like it’s closer to about 1 in 100,000. And that is why we modified our recommendations and made changes as we learn more information.”

NACI’s VIPIT (VITT) risk analysis starts on page 102 of its new 114-page “Recommendations on the use of COVID-19 vaccines.” It compares the risk of VIPIT (1 in 100,000 will need ICU care) to COVID-19 ICU admissions that would be prevented by AstraZeneca vaccination for age cohorts in five specific scenarios, ranging from areas with low case counts to very high case counts (for Ontario, that is a range from rural areas like Algoma, Sudbury and Huron-Perth to the provincial epicentre of the third wave, the Greater Toronto Area).

While all age cohorts have a 1 in 100,000 chance of needing ICU care if they get VIPIT, the odds of needing ICU care are far higher if you live in the highest COVID-19 risk areas. In particular, those aged 40-49 have a nearly nine in 100,000 chance of being admitted to the ICU if they get COVID-19, while that risk climbs even higher to 12 in 100,000 for those aged 50-59. Getting the AstraZeneca vaccine would potentially prevent those admissions, according to NACI’s calculations.

But there aren’t many of those low-risk locales in Canada right now. So, Dr. Gerald Evans, the chair of the division of infectious diseases at Queen’s University in Kingston, Ont., is staying with the tried-and-true recommendation of taking the first vaccine available, saying, “Frankly, if I was a young man—I’m not a young man—knowing what I know about COVID, I would take whatever vaccine came to me,” because “the protection it offers from getting severely ill and dying of COVID is so immensely higher than that small risk [of VIPIT].”

How many people have received doses of the AstraZeneca vaccine?

Since early March, Canada has received 2.3 million doses of AstraZeneca vaccine, with the last delivery arriving in early April. After provinces, including Ontario, reduced the minimum age limit of those who can get AstraZeneca from 55 to 40, demand exploded. And though precise figures aren’t available, it’s assumed that most of those 2.3 million doses are already in arms as first doses of the two-dose vaccine. Though Canada has a contract with AstraZeneca for 20 million doses (and another two million through other sources, including the Serum Institute of India, where all exports are currently halted), there is no public information as to when the next shipment of doses will arrive.

Is there a link between those rare blood clots and a second dose of AstraZeneca vaccine?

“Does my risk increase, does it decrease? Does the fact I got it safely the first time mean I’ll get it safely the second time?” are some of the questions being asked of Dr. Evans, a member of Ontario’s independent COVID-19 Science Advisory Table. “My general opinion on this is that if you safely received it the first time, you can safely receive it the second time,” he says, though, at the same time, he notes that, “We are going to be watching to see the emerging evidence on people who have gotten their two doses of AstraZeneca,” including in Britain, which only geared up its second-dose vaccination campaign this spring.

RELATED: 15 ways to help India during the devastating second wave of COVID-19

As well, on April 23, the European Medicines Agency stated, “There has not been enough exposure and follow-up time to determine whether the risk of blood clots with low blood platelets after a second dose will differ from the risk after the first dose. At present there are no or limited data to change current recommendations.”

Can those who got a first dose of AstraZeneca get a second dose of an mRNA vaccine?

Right now, researchers are studying the possibility that people can be given one dose of a viral vector vaccine and another of an mRNA vaccine. Dr. Bonnie Henry, B.C.’s provincial health officer raised the issue on Monday after the NACI press conference, saying, “It may turn out that it is a better, stronger immune response to receive a second dose with a different vaccine.”

“Think of vaccination as presenting our immune system with a red flag—here is something you should be on the lookout for,” Dr. Alan Bernstein, CEO of CIFAR, a Toronto-based global research organization, told Maclean’s in February. “And so if you go with the mRNA vaccine first, you’re going to activate one branch of our immune system.” Bernstein suggests thinking of this first vaccine as our “air force.” Then, he says, you introduce one of the viral vector vaccines a couple of weeks later, and it tells the immune system: “‘You saw this guy before, but I’m going to present him in a different format,’” says Bernstein. “And so it’s going to activate a different branch of our immune system. Think of it as our navy. And so now you have the air force and the navy activated and so you’ve got a double threat against this incoming virus.”

However, everyone is waiting for data before making a recommendation to mix vaccine types. As of now, Dr. Evans says that people who received their first doses of AstraZeneca will receive second doses of the same vaccine.

How good is the AstraZeneca vaccine?

A lot of the research into the effectiveness of AstraZeneca is taking place in Britain, which has a similar “first dose first” vaccination rollout, though it started much earlier because of an abundance of vaccine supply. Like Canada, the U.K. has delayed second doses beyond the 21 days recommended by AstraZeneca. (Britain delayed to around three months between doses, while Canada is delaying to up to four months. Also like in much of Canada, most new COVID cases in the U.K. are the B.1.1.7 variant of concern.) By early April, more than 20 million doses of AstraZeneca had been given in Britain.

In interim findings published on May 1 in The Lancet, researchers examined first-dose results in Scotland, where around 50 per cent of the population were given shots as of mid-April. They found that a single dose of the AstraZeneca vaccine reduced hospital admissions due to COVID-19 by 88 per cent, 28-34 days after vaccination. By comparison, a single dose of Pfizer reduced hospitalizations by 91 per cent.

That effectiveness can be seen in the country’s pandemic statistics. In the middle of January, Britain was reporting an average of 1,285 COVID-19 deaths each day, according to official statistics. On May 3, Britain reported just one death. And case counts, which averaged more than 61,000 a day on Jan. 1 dropped to 1,650 on Monday.

Over the weekend, around 3,000 partygoers crowded into a nightclub in Liverpool for the first dance party of the pandemic, taking part in a research project to see how well its public health measures are holding.