The charge against Adam Picard was stayed in a surprise decision, making it one of the first murder cases affected by the new rules laid out by Canada's highest court 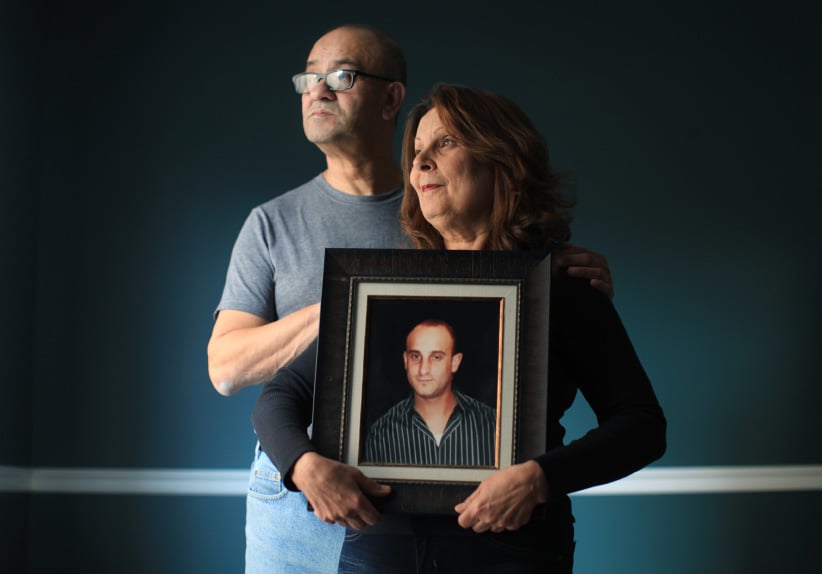 Nicole Nayel (right) and Amine Nayel hold a photograph of their son Fouad Nayel. Adam Picard, 33, was charged for the June 2012 killing of Fouad Nayel. Picard first-degree murder charge stayed after a four-year delay in the justice system. (Dave Chan)

TORONTO – Prosecutors are seeking a new trial for an ex-soldier accused of murder who walked free because his case took too long to get to trial, saying the Ottawa man didn’t assert his rights early enough in the process.

The Crown is appealing an Ontario judge’s decision to stay a first-degree murder charge against Adam Picard under new time limits established by the Supreme Court of Canada last summer.

The appeal, which is scheduled to be heard in Toronto on Monday, also alleges Ontario Superior Court Justice Julianne Parfett mischaracterized the nature of the delays and failed to consider the complexity of the case.

Picard was arrested in December 2012 in the killing of 28-year-old, who went missing in June of that year and is believed to have died that same day.

The charge against Picard was stayed in a surprise decision almost four years later, making it one of the first murder cases affected by the new rules laid out by Canada’s highest court.

These state that cases heard in provincial court should go to trial within 18 months and those heard in Superior Court should do so within 30 months, once delays caused solely by the defence or by unpredictable events have been subtracted. If the time frame exceeds those limits, the Crown must demonstrate that the delay was reasonable.

In documents filed ahead of the hearing, prosecutors argue Picard didn’t raise concerns about the delays until days before his trial was set to begin, even though the date had been chosen 18 months earlier.

Picard “did not assert his right in a timely manner,” they say, noting applications under Charter rights typically must be filed at least 60 days before a pre-trial or trial.

More: Michael Friscolanti on the how the Supreme Court ruling is a ‘wake-up call’ for the justice system

As a result, the Crown did not have the necessary time to properly address the matter, which left it at a disadvantage, they argue.

“The Crown was forced to respond to the applicant’s factum in a matter of days without adequate notice, and without a complete application record,” they say.

“Contrary to the obligations established in jurisprudence, the trial judge did not consider the impact of the prejudice to the Crown. In failing to do so she erred in law.”

The prosecution also alleges that at least seven months of the delays were caused by the defence, rather than the two months acknowledged by the judge.

Picard fired and replaced his lawyer after being denied bail, which prosecutors say stalled the proceedings.

“The respondent’s failure to retain counsel to represent him in his defence held the matter at a standstill until he deigned to do that and pushed back all the relevant proceedings that followed,” they argue.

“Once counsel was retained, the Crown was able and did move promptly to set a judicial pretrial and move the matter forward.”

They allege the judge also failed to make allowances for the complexity of the case, which she deemed to be similar to other murder cases in that regard.

Picard’s lawyers, meanwhile, say Parfett’s decision should be upheld. They argue prosecutors were unavailable for a long stretch of last year, causing up to eight months of delays.

“But for this Crown delay, the net delay would have been between 26 and 33 months and this would be a very different case,” they say.