"I almost threw up. I gagged ... I was absolutely beside myself," says Jim Elliott 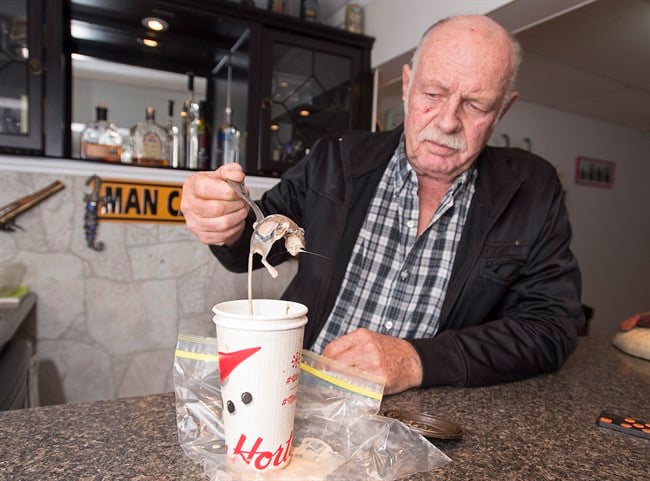 Jim Elliott displays the mouse he claims he recently found in a coffee he purchased at a Tim Hortons outlet, at his residence in Stewiacke, N.S., on Friday, Dec. 9, 2016. THE CANADIAN PRESS/Andrew Vaughan

STEWIACKE, N.S. – A man who says he pulled a dead mouse from a cup of Tim Hortons coffee is asking for an apology from the restaurant chain.

Jim Elliott says he bought two take-out coffees two weeks ago from the outlet in Stewiacke, N.S., and later placed one of the unopened cups in his refrigerator so he could drink it later.

Elliott says he reheated the cup in his microwave the next afternoon, and when he opened the plastic flap to take a sip, he felt something touch his lips.

He thought a tea bag had been mistakenly added to his order, he says.

“I got a fork, stuck it down in and hauled up a dead mouse,” he said in an interview Friday, exactly two weeks after the alleged encounter in his home in Stewiacke.

“I almost threw up. I gagged … I was absolutely beside myself. What the hell? I was angry. I was hurt. I was half sick. I took the coffee and I got in the truck and I went to Tim Hortons.”

Elliott says the assistant manager told him the manager wouldn’t be in until after the weekend.

He said he has since sent an email to Tim Hortons head office in Toronto. In response, he received a questionnaire, which he filled out and returned.

Later, Elliott said, he received a call from a man who identified himself as a manager.

“He didn’t seem too overly concerned,” he said, adding that the man said he would call back — but Elliott said that hasn’t happened.

“I just want Tim Hortons to acknowledge this problem and at least apologize to me. That was my objective from Day 1.”

Elliott said he also contacted the provincial government to complain.

On Dec. 5, the food safety division of the Agriculture Department posted an online inspection report noting four deficiencies at the Tim Hortons outlet on Main Street in Stewiacke. One of the deficiencies was the “presence of pests,” but the document did not offer details.

The report advised the operator to “sanitize all areas affected by evidence of pests,” and to have a pest control expert look into the problem.

Reached Friday, the manager of the outlet referred all inquiries to Tim Hortons head office in Toronto, which did not respond to an emailed request for comment.

Later in the day a spokesman for the provincial agriculture department said a follow up inspection was completed Dec. 8 and the operator is now in compliance with provincial regulations.

Elliott said he hasn’t felt sick since the incident, but he said he has been traumatized by the torrent of “sick and vulgar” emails, texts and phone calls he’s received from people accusing him of fabricating the story to win a financial settlement from the national chain.

Elliott said he used to travel out West on a regular basis to work as a pipeline safety consultant, but with the downturn in the oilpatch, he’s been spending more time working from home.

He said the mouse and double-cupped coffee have been placed in a refrigerator in his basement, secured in a plastic bag.