Designating the Proud Boys as a terrorist organization is a mistake

Adnan R. Khan: We should not confuse what is merely a group of criminal chauvinists for a disciplined and determined organization willing to commit mass casualties for their cause 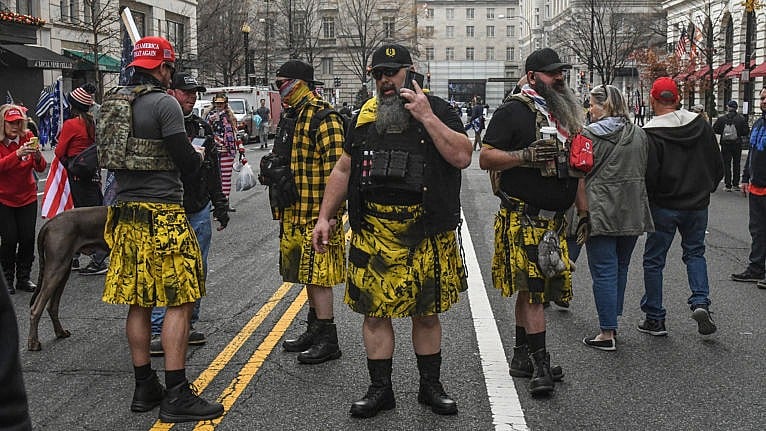 Members of the Proud Boys during a protest on Dec. 12, 2020, in Washington, DC. (Stephanie Keith/Getty Images)

Back in October I was sipping a beer in a rundown bar in St. Maries, Idaho, when one of the locals, who had moved to the area in his early 20s because he loved his guns and distrusted the government, turned to me and, referring to the Proud Boys, said: “What do you think these guys are gonna do? Start killing fellow Americans? The ones you should worry about aren’t running around in yellow and black shirts shoutin’ about the revolution or whatever they’re after. The ones you should worry about are up in those mountains.”

The person, who asked to remain anonymous, pointed out the window at the forested areas that surround St. Maries where some of the most paranoid of armed militias have set up their retreats, preparing for what they believe is the coming civil war.

I remembered that conversation recently while reading about the debate in Canada over designating the Proud Boys as a terrorist organization. It seemed quaint, contrasted with the men I had met up in those mountains—the hardened preppers who spend whatever spare time they have training for the collapse of American civilization, or ruminating on the coming race war. Those men, I thought, would laugh at a guy like Enrique Tarrio, the current leader of the Proud Boys, who was arrested in Washington two days before the inauguration of Joe Biden and told by a judge to leave the city. For the Proud Boys, Inauguration Day was supposed be their revolutionary moment. Tarrio missed it because a judge wagged a finger at him and told him to go home. Then it was revealed that Tarrio used to be an FBI informant.

After initially reading the NDP’s online petition calling for Tarrio’s Proud Boys to be banned and designated a terrorist organization, I admittedly had to scratch my head and wonder: was this really the same group that the local had told me was more of a drinking club than a force of destruction?

“Alarmingly,” the petition concluded, “their founder is from Canada.” That line struck me as the kind of misdirection one should avoid when assessing an issue as serious as a terrorist designation. The fact is that Gavin McInnes, the founder of the Proud Boys, currently has no ties to the group and has disavowed white supremacy. His goal when he set up the Proud Boys was little more than a fight club for angry white men struggling to find a place in a world where ideas matter more than ideational machismo.

There are also millions of North Americans and Europeans who are white supremacists, but they are also not terrorists. Supremacism, white or otherwise, is a societal disease that cannot be addressed by a fundamentally political concept like terrorism.

We should not confuse what is merely a group of criminal chauvinists for a disciplined and determined organization willing to commit mass casualties for their cause. The Proud Boys hold up a mirror to our society. They show us what happens when masculine white privilege crashes headlong into an economy that no longer values them. If we want to address the problem, we must resist the urge to tuck them away in a box labelled “terrorism” and hope the appropriate authorities will deal with it.

Indeed, doing so may actually exacerbate the problem. If there is one lesson learned since the Sept. 11, 2001 attacks, it is that overreliance on security-centred mechanisms to confront violent extremism only creates more violent extremists, which in turn generates more draconian police responses. It drives groups that have operated openly underground, forcing law enforcement to resort to ever more draconian measures to keep tabs on them.

The Proud Boys are loud and brash and attention-seeking, which makes them more a policing issue than a national security threat. Up to now, of course, not enough resources have been put into monitoring their activities. Even the Canadian military has had to admit that it allowed the group to spread and recruit under its nose. That, in itself, is a deeply rooted societal problem: white people do not elicit the same concern as Black and brown folk. We need to fix that blind spot.

While we do that, there are groups who pose a serious threat. The Base, a neo-Nazi outfit, is one that deserves the new terrorist designation more than the Proud Boys. Its global network and ability to operate in the shadows is genuinely alarming. And its goal is to set up a white ethno-state in northern Washington and Idaho, right on Canada’s doorstep.

There are also groups like the Oath Keepers and the Three Percenters, which are much more serious about their violent goals. They are actively recruiting from the Proud Boys to beef up their numbers and the FBI’s own investigations have shown that they were more organized during the Capitol siege.