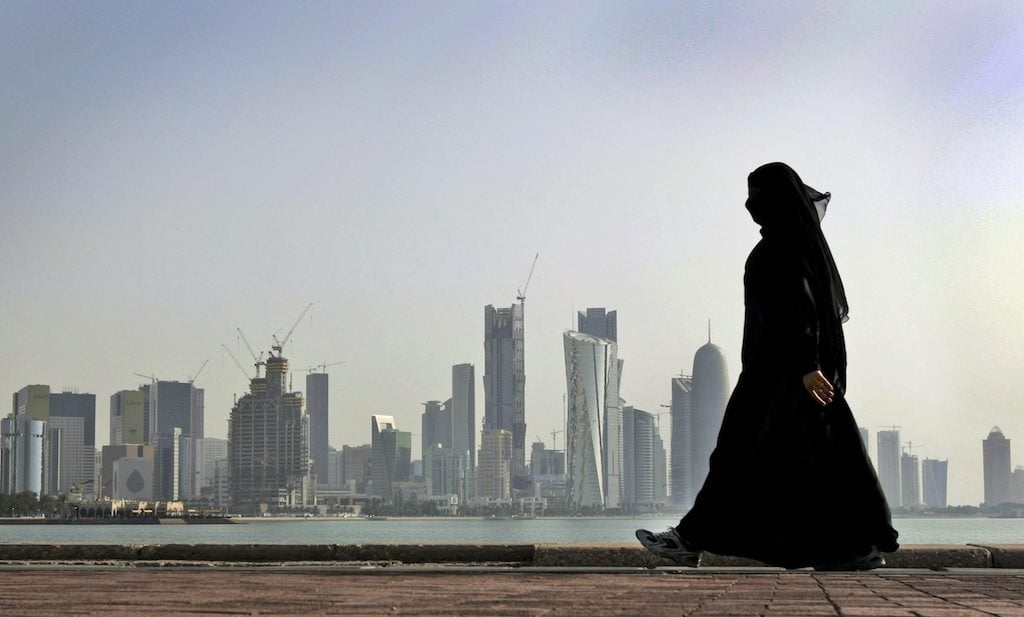 A Qatari woman walks in front of the city skyline in Doha, Qatar, May 14, 2010. (AP Photo/Kamran Jebreili, File)

DUBAI, United Arab Emirates – A top Emirati diplomat said Wednesday “there’s nothing to negotiate” with Qatar over a growing diplomatic dispute about the energy-rich nation’s alleged funding of terror groups, signalling Arab countries trying to isolate it won’t back down.

Speaking in a rare interview, Emirati Minister of State for Foreign Affairs Anwar Gargash told The Associated Press that Qatar has “chosen to ride the tiger of extremism and terrorism” and now needed to pay the price.

Gargash said Qatar “absolutely” should expel members of Hamas, stop its support of terror groups “with al-Qaida DNA” around the world and rein in the many media outlets it funds, chief among them the Doha-based satellite news network Al-Jazeera.

While applauding a Kuwaiti effort to mediate the crisis, Gargash said Emirati and Saudi officials planned to concede nothing to Qatar, an international air travel hub now cut off from some of the skies around it and blocked from receiving the trucks full of food it relies on to feed its citizens.

Their “fingerprints are all over the place” in terror funding, Gargash said. “Enough is enough.”

Qatar long has denied funding extremists, and its foreign minister has struck a defiant tone in interviews, even after worried residents emptied grocery stores in its capital of Doha. Qatar relies heavily on food imports, especially those coming over its only land border with Saudi Arabia. The Arab countries have blocked Qatari vessels from entering their airspace, as well as using their seaports, and Saudi Arabia has closed off its land border.

While its flag carrier Qatar Airways now flies increasingly over Iran and Turkey, the airline has been blocked from landing elsewhere in the Middle East. Al-Jazeera offices also have been shut down by authorities in Saudi Arabia and Jordan.

Speaking to the AP from a Foreign Ministry office in Dubai, Gargash listed a number of terror groups he alleged Qatar had funded, including al-Qaida’s branches in Syria and Somalia, militants in Egypt’s Sinai Peninsula and other group’s with “al-Qaida-type organizations” in Libya. He offered no documents to support his claim, but Western officials long have accused Qatar’s government of allowing or even encouraging funding of Sunni extremists.

Gargash particularly pointed out the tens of millions of dollars paid to Shiite militias and others to free dozens of Qatari ruling family members and others in Iraq after 16 months in captivity.

Asked for specifics about what Arab nations wanted from Qatar, Gargash said expelling members of Hamas and other groups from Qatar was important. Gaza’s Islamic Hamas rulers, a major recipient of Qatari aid, have called Saudi Arabia’s call for Qatar to cut ties with the Palestinian militant group “regrettable” and said it contradicts traditional Arab support for the Palestinian cause.

Both al-Jubeir and Gargash in their comments suggested their complaints about Qatar go back years, likely implying their criticism is focused on Sheikh Hamad bin Khalifa Al Thani. Sheikh Hamad took over as Qatar’s emir in 1995 and expanded his nation’s presence on the international scene through negotiating hostage releases, briefly flirting with diplomatic ties to Israel, hosting a Taliban office and creating Al-Jazeera.

Qatar faced a similar crisis in 2014 that saw Arab countries pull their ambassadors from the country. That crisis end eight months later, but the roots of it are clearly seen in the latest dispute.

“Qataris are questioning whether this is going to end up in seeing a change in leadership itself in Qatar,” Al Qassemi told the AP in his office in Sharjah, near Dubai. “So it is a very serious issue. Again, this is Qataris speaking to international media wondering whether this is possible at all.”

He added: “Doha now is completely isolated. Doha now needs to take serious steps very rapidly to placate not only their neighbours but also their allies around the world.”

The Gulf countries have ordered their citizens out of Qatar and gave Qataris abroad 14 days to return home. The countries also said they would eject Qatar’s diplomats.

Soccer’s world governing body FIFA also has said it remains in regular contact with Qatar, which will host the 2022 World Cup. Qatar just finished one of the stadiums for the tournament, though others have yet to be built.

Al Qassemi, who previously wrote a column describing steps Qatar would need to take, said that the crisis will only escalate if Doha doesn’t back down. He said Qatar needed to shut down or limit its Al-Jazeera news network, as well as stop funding extremist groups and others.

His comments took on further strength as the UAE’s Justice Ministry warned social media users that they can face three to 15 years in prison time and fines starting from 500,000 dirhams ($136,000) for offering sympathy for Qatar. The ministry quoted UAE Attorney General Hamad Saif al-Shamsi on social media making the warning, saying it came over Qatar’s “hostile and reckless policy.”

While liberal compared to much of the Middle East, the UAE has tough cybercrime and slander laws under which people can be arrested, imprisoned and deported for taking photographs without the consent of those shown.

Al Qassemi also warned Qatar should not rely on hosting some 10,000 American troops at its al-Udeid Air Base as protection against the Arab nations lined up against it.

“The Qataris should not count on that base as being a guarantee of sort of American protection when it comes to conflict with Saudi Arabia,” Al Qassemi said. “I think the Americans would choose to side with Saudi Arabia over any other country in the region.”