Does Latvia need the Canadian soldiers now protecting it?

The NATO mission was born amid fear that Russia's intervention in Ukraine would recur in the Baltics. But Latvia is not Ukraine. 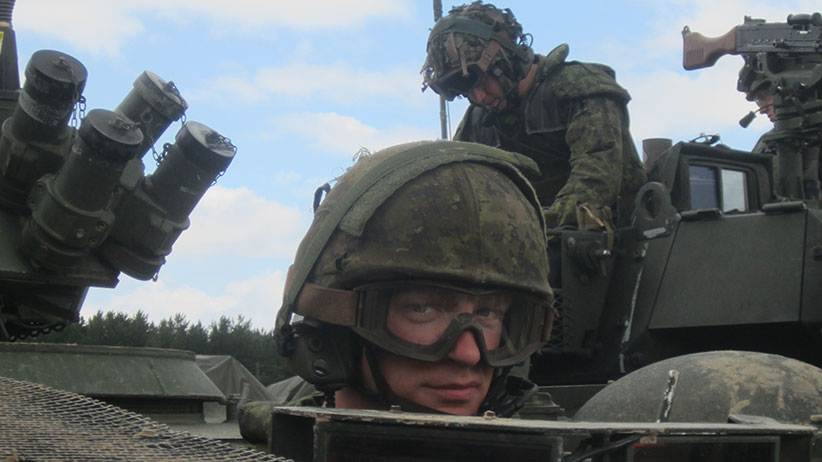 In a New Brunswick-sized country, small numbers add up.

It’s a crisp summer afternoon in a wood near Riga, and I’m squatting on the edge of a sandpit observing some of the 1,200 NATO troops who have come to help Latvia’s miniature, 5,000-soldier army, which is supplemented by an 8,000-strong reserve force, ward off Russia.

Behind me, sitting on a berm, are a few hundred infantry from Canada and the five other NATO nations that make up this Canadian-led mission. In front of us, ranged in a field, are a pair of snipers and a row of watermelons. The shooters, dressed in camouflage netting, are guided by an Italian spotter. As they wriggle to the lip of an overhang, muscular-sounding shots ring out while, at a distance of 200 metres, watermelons vaporize.

We have been watching scenes like this since mid-morning. After the snipers have had their go, an Albanian bomb-clearing squad enters the field for a demonstration. Throughout the day, armoured vehicles, including a pixel-patterned Polish tank, chew up the turf, shoot coloured smoke and recoil from the backfire of their heavy weapons.

The display is noisy and impressive. Canadian officers are adamant that this is about deterrence.

“We do not have an enemy,” stresses Army spokesman Capt. Dan Mazurek, a strapping 35-year-old. “There is not an enemy in Latvia and the Baltics.”

Not technically, maybe. But NATO’s Enhanced Forward Presence, in which Latvia is an element, is a stated response to Russian President Vladimir Putin’s 2014 intervention in Ukraine. Convening in Warsaw in July 2016, NATO countries voted to bolster defences by assigning multi-national battlegroups to four alliance member states in northeast Europe that border Russia.

Now Canada’s first rotation of 450 troops, from the Princess Patricia’s Canadian Light Infantry Brigade in Edmonton, has teamed up with units from Spain, Italy, Poland, Slovenia and Albania at a base inside the Adaži Training Area, outside Riga. In 2018, with the arrival of contingents from Slovakia and the Czech Republic, the ranks of the battlegroup will grow to 1,400.

The battlegroup operates by pooling capabilities. Albania provides the bomb-disposal unit. A Slovenian platoon is equipped to detect and clean up chemical, biological, radiological or nuclear hazards. Canada’s soldiers include a mechanized infantry company of around 100 and a reconnaissance platoon of 30. The Czechs, when they join next year, will bring a mortar platoon.

The entire group is led by a Canadian, Lt.-Col. Wade Rutland, but has been incorporated into a Latvian brigade and is subordinate to a Latvian officer.

When it comes to equipment, Poland and Spain provide tanks. Canada has contributed over a dozen machine-gun mounted light armoured vehicles, a set of C-16 anti-tank grenade launchers and some rocket-launching Carl Gustav recoilless rifles. A battery of four howitzers will arrive in August. At the base, which is under expansion, barracks and longhouse-sized tents are laid out with Lego-style precision. There are prefab washrooms brought from Canada. The roads hum with army vehicles. The atmosphere is energized and professional.

Yet the entire mission could be regarded as political theatre, rooted in a set of assumptions among Western leaders that Latvia and the rest of the Baltics are at risk. First among those beliefs: that Russia’s actions in Ukraine were proof of a newfound aggressiveness, rather than a regionally specific action aimed at protecting local interests, such as continued access to the Russian naval base in Crimea. Second: that ethnic Russian populations in the Baltics could be activated the way they were in Ukraine. Moscow’s incursions into that country were preceded, after all, by demonstrations and occupations of state buildings by ethnic Russians. These protests—thought to have been Kremlin orchestrated—were thought to be a template for Russian interventions elsewhere.

Accept these premises, and the Baltic states—thinly populated, weakly armed countries with high proportions of Russian-speakers (in Latvia it is 26 per cent)—appear likely targets.

Few analysts offered a cogent account of how attacking a Baltic state could benefit Russia, but in 2014, major news outlets including the BBC and the Globe and Mail began publishing articles suggesting tensions between Russian-speakers and non-Russian-speakers in the Baltics could boil over, prompting a Russian invasion.

Sensational as this prospect is, it supposes a state of divided communities with an alienated minority that doesn’t square with what’s visible on the ground here.

On the face of things, Riga provides a model of linguistic integration that compares favourably with that of, say, Montreal. In day-to-day life, Latvian and Russian speakers work in the same businesses. Sports teams from Russia travel here for competitions. Many, perhaps most, Rigans are bilingual, and, according to one source, Russian-speakers serve in the Latvian army in numbers roughly proportionate to their demographic weight. “We’ve got the highest ratio of inter-ethnic marriage in Europe,” notes Nils Ušakovs, 41, the mayor of Riga, who is a Russian-speaker.

Ušakovs is head of a party popular with ethnic Russians. He is also leader of an administration that offers free Latvian language classes to Russian-speaking Rigans that have so far drawn 10,000 students.

“[The City] is really intermixed,” says Ušakovs, pausing for an interview in his Old Town office, where he is accompanied by several cats. “It’s not like Belgium or Canada where you can say this is a Russian district; this is a Latvian district.”

RELATED: Canadian soldiers are the new deterrents in the Baltics

The mayor concedes there are policy issues dividing ethnic Latvians and ethnic Russians. Around a decade ago, a reform of the school curriculum that mandated more time for Latvian-language instruction in Russian minority schools prompted protest. But he insists that such differences are handled peacefully. “There is no Russian separatist movement,” he emphasizes. “We have never had any public demonstration or public event or riot or confrontation that could be even remotely classified as a threat to the state.”

Ušakovs draws a sharp distinction between Latvia and Ukraine, noting that before the Ukraine war started, Ukraine’s per-capita GDP was four times less than Latvia’s, and that Ukraine was dealing with “nationalism, corruption and poverty,” to a degree that Latvia is not. “For a Crimean pensioner, joining Russia looked like an increase in their pension,” he argues, whereas even a comparatively poor Latvian city like Daugavpils, which is majority Russian-speaking, is doing better than its neighbor, Pskov, across the border in Russia.

On this last point Ušakovs is not alone. Sigme, 28, is an ethnic Latvian civil servant, with a boyfriend in the Latvian army (she did not give her last name). “Of course there are social cleavages,” she admits, but these divisions are “more social, and not in ideological terms.

While many Russian-speakers may have an affinity for the Motherland, Sigme adds, “they don’t want to live in Russia, or in conditions like Russia. So if a threat comes, I doubt they would want to say no to democracy and those kind of values.”

To be clear, most Latvians, including Ušakovs and Sigme, are supportive of their country’s NATO membership. Yet a majority of Rigans I spoke to on the street view the battlegroup at Camp Adaži as, at best, an insurance policy, and, at worst, a distraction. More worrisome to some is the money that their own country is lavishing on its armed forces. On the increase since 2015, Latvia’s defence budget will jump to 560 million euros per annum next year from its current 460 million, to meet a NATO-imposed target of military spending equal to two per cent of GDP. 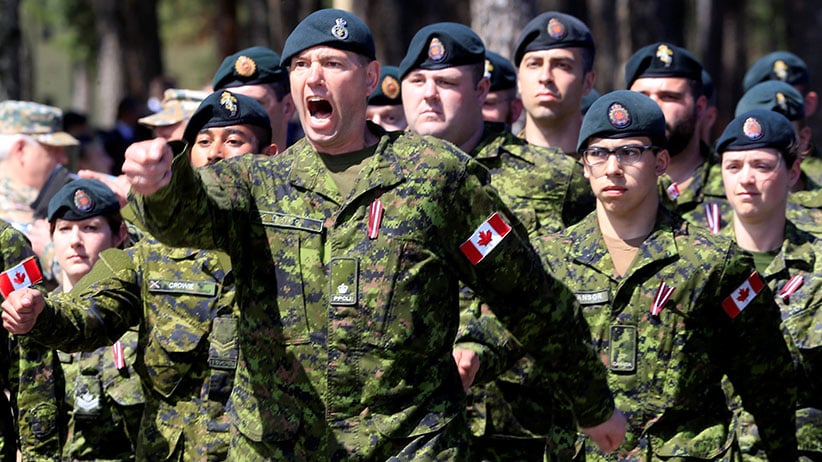 Margrit Sprancmane, the ethnic-Latvian editor of a Russian-language weekly newspaper, charges that this increase comes at the expense of social spending. “We have a very difficult social situation,” she argues, noting that half of pensioners in Latvia live on no more than 235 euros a month. “They ask [the government] to raise their pensions, but they’re told there’s no money. Of course, a thinking person’s going to ask, why do we need these tanks and rockets? Let’s start by doing what’s needed to make sure people don’t die from diseases and can get proper care from the doctor.”

Sprancmane judges the prospect of a Russian attack as fairly remote. But she paints a picture of a struggling economy (Latvia’s per capita GDP is one third of Canada’s), that has lost 350,000 citizens out of a population of two million to emigration, since the country joined the EU in 2004. “People go to work in other EU countries. They see how their parents are living and they don’t want to live like that. The country is in a difficult demographic condition, and that’s a lot more frightening for Latvia than the possibility of any conflict,” she says.

For the moment, Canada’s $134 million-a-year commitment to Enhanced Forward Presence is unlikely to be controversial at home in the same way. This money is small change in terms of Canada’s federal budget. What’s more, the mission represents a pivot to Europe that, after a decade facing a murky foe in Afghanistan, many Canadians may find comforting.

Latvia’s importance to Canada is in fact such that Riga has been chosen as the headquarters for Joint Task Force (JTF) Europe. This is a 50-soldier hub that, starting this year, will coordinate all Canadian military operations on the continent, consisting of missions in Kosovo, Cyprus, Latvia and Ukraine.

At Adaži, Canadian officers stress that they’ve taken steps to ensure things between them and the Russians don’t escalate.  Lt-Col. Rutland, the Canadian battlegroup commander, says his mission orders restrict him from stationing troops within a set distance of the Russian border (though he declines to specify what that distance is).

RELATED: How NATO is getting serious about Russia

According to the officers, the battlegroup will remain at Adaži for training, and wait for orders from the Latvian brigade commander, Col. Ilmar Lejins, in the event of a crisis. “When we train, we will train transparently,” adds Mazurek, the press attaché. “Our exercises are announced ahead of time. We do not want there to be snap surprises that could lead to a misunderstanding.”

There is no reason to doubt this. Still, I’m surprised to learn  that neither the battlegroup nor the Latvian Ministry of Defence has access to a so-called “red phone” allowing them communicate directly to a Russian commander on the other side of the border. Such lines were a mainstay during the Cold War, and played a species-saving role by preventing panic over an adversary’s minor-yet-unexpected manoeuver from escalating into something apocalyptic. The absence of a red phone in this case suggests one of two interpretations: extreme carelessness on the part of the Canadians, Latvians and Russians; or tacit recognition on all sides that the chances of a real conflict are almost non-existent.

Maybe that’s the point. In a political climate where it is de rigueur to be seen to be sticking up to Russian aggression, it’s far safer to send troops to a non-theatre like Latvia, where Russia has few demonstrated interests , and there is no restive Russian minority, than to eastern Ukraine, where there is real shooting (Canada does operate a small training mission in western Ukraine, but it’s far from the front line).

Our soldiers in Latvia will almost certainly do no harm. They will work in a Canada-like climate, undergo valuable training, and in some cases, as Mazurek suggested to me in a lighter moment, come home with Latvian spouses. But to the degree that their mission is premised on the idea that Latvia could be the site of a geopolitical showdown, or a revolt among ethnic Russians, it’s the definition of low-risk. So long as Russia and its enigmatic president act according to expectation.