Donald Trump's primary playbook is leading him out of bounds

Behind by 15 points, is Trump's primary-season magic just a memory? 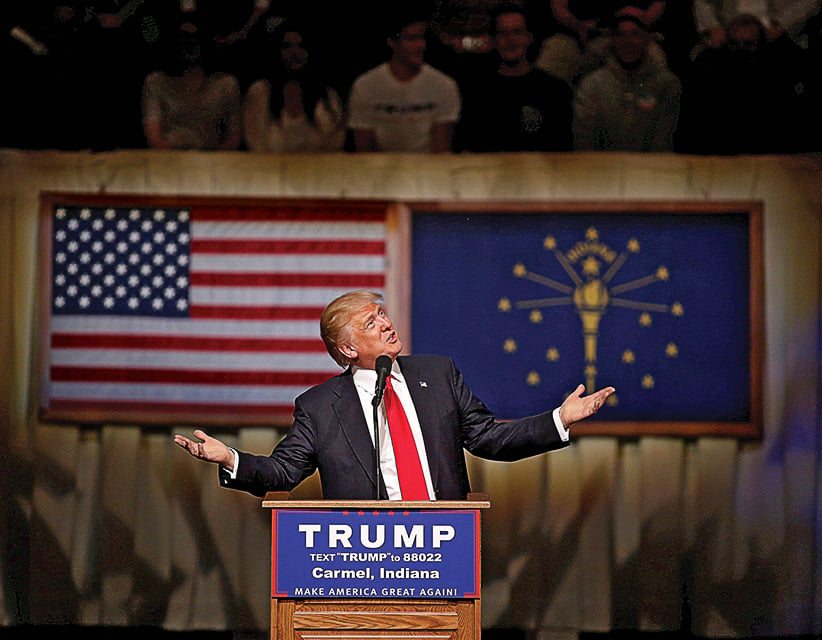 U.S. Republican presidential candidate Donald Trump speaks at a campaign event at The Palladium at the Center for Performing Arts in Carmel, Indiana, U.S. May 2, 2016. (Aaron Bernstein/Reuters)

ABINGDON, Va. — In the 2016 presidential campaign, it’s long been an article of faith: The rules of political gravity don’t apply to Donald Trump.

Maybe now they do.

After winning state after state while bouncing between controversies in the GOP primaries, Trump is still stumbling on the stump. His latest unforced mishap: an off-hand remark that critics quickly slammed as a suggestion that gun-rights backers should take a literal shot at Hillary Clinton should she win the White House.

But rather than continuing to float above the criticism, Trump is losing ground in preference polls and alienating prominent Republicans by the day. Even some of his supporters worry Trump’s lack of a filter is hurting his White House chances, a concern they say has only grown in recent weeks.

“You’d think it would be pretty simple for a grown man to keep his mouth shut sometimes,” said Seth Walls, 18, a landscaper from Whitetop, Virginia, who attended his first Trump rally on Wednesday. “These Twitter rants and things he does in the media, I definitely think it’s hurting him.”

With early voting set to begin next month in several states, time is running short for Trump to make a major change in his approach. As he did in the primaries, the billionaire continues to dismiss guidance from senior Republicans, in and out of his campaign. He has yet to return to running television ads even as Clinton fills the airwaves, and leads a campaign team that remains badly understaffed.

But it’s not a surprise the latest flap springs from a Trump rally, the centerpiece of his campaign. Trump revels in the energy provided by the crowd, made up mostly of white, working-class voters, as he delivers hour-long speeches largely without notes—and never with a teleprompter.

Trump rode such events to great success in the primaries, when each of Trump’s eyebrow-raising statements—including a moment when he appeared to mock a disabled journalist and his repeated retelling of a debunked story about U.S. soldiers dipping bullets in pig’s blood—earned him a tremendous amount of attention and carried little electoral consequence.

“He tries to amp up the crowd, which he’s very good at,” said former Trump adviser Barry Bennett, who said the rallies may be large, but don’t represent the broader coalition of voters who typically decide general elections. “The problem is there’s a television audience watching at home as well. They have a hard time understanding what he’s doing.”

Among that more diverse and moderate general electorate, polls find Trump trailing Clinton nationally and in most battleground states. The Democratic nominee’s emerging advantage comes at a key moment after both political conventions are over, when the state of a presidential race tends to stabilize and leads are difficult to surmount.

“He can’t seem to put himself in a general election mindset,” said Stephan Thompson, an aide to Republican Gov. Scott Walker in Wisconsin, where a poll released Wednesday puts Trump 15 points behind.

After the Democratic convention, Trump sparked days of outrage across the political spectrum by repeatedly criticizing a Muslim family whose son died fighting the war in Iraq. He further alarmed Republican leaders when he declared he wasn’t ready to endorse House Speaker Paul Ryan—a stance he later reversed.

Frustrated GOP officials responded by calling financier Carl Icahn to help persuade Trump to shift his approach. Some were pleased with the results, pointing to Trump’s economic address on Monday in Detroit and the restraint he showed in the face of repeated interruptions by protesters.

The next day, however, Trump inflamed matters anew—and overshadowed a negative report about Clinton’s use of a private email account as secretary of state—by going off script at a rally in North Carolina. Trump said that if Clinton were elected president, there would be “nothing you can do” to stop her from stacking the Supreme Court with anti-gun justices.

He added ambiguously: “Although, the Second Amendment people, maybe there is, I don’t know. But I’ll tell you what: that will be a horrible day.”

Democrats pounced, immediately slamming Trump for seeming to suggest Clinton should be shot. Trump was quick to blame the media for that reaction, responding with a blunt “Give me a break!” At an Iowa rally Wednesday, Clinton said Trump’s remark was a “casual inciting of violence” that shows he’s unfit to be president.

“He’s better than he was a week ago—I think he’s learned some very painful lessons,” Gingrich said, predicting Trump will “continue to grow” as a candidate.

Trump and his supporters have pointed to positive signs, including a significant boost in his at-first-tepid fundraising, bringing in nearly as much last month as Clinton. And while he is now lagging in polling, he remains competitive, despite having spent nothing on television ads.

And on Wednesday, Trump didn’t mention the Second Amendment flare-up. He was back on message in a speech largely focused on the his safer talking points, like boosting the coal industry. Lisa Bolling, an elementary school teacher from Abingdon, Virginia, who attended Trump’s event, said his many stumbles can only help him.

“I really don’t think it will affect his chances, because I think what America’s looking for now is honesty and straightforwardness,” Bolling said. “It’s a refreshing way to speak and do things that he’s bringing to this campaign, and I believe in the long run, it will be beneficial to him.”