Jenna Talackova failed to win the Miss Universe crown, but she inspired many 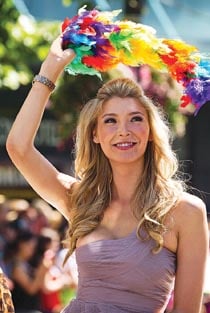 Fairest of the fair

Jenna Talackova may have failed to win the Miss Universe crown, but she inspired transgendered people with her battle to compete. The Vancouverite, who had sex-change surgery at 19, was disqualified because she was not a “naturally born” woman, as per pageant rules. She threatened to sue before contest owner Donald Trump intervened on the basis that she was a legally recognized female in Canada (surely Trump’s most sensible public statement all year). Talackova went on to win Miss Congeniality.

Watch in 2013 for the erasure of Bo Xilai from the official history of the Chinese Communist Party. The former party chief in Chongqing was seen as a potential president before his wife, Gu Kailai, was implicated last spring in the murder of a British businessman and the family’s corrupt dealings were exposed for all in China to see. Now, with Gu convicted, Bo facing bribery charges and with public anger over corruption on the rise in China, the party is denying he had much influence to begin with.

Conservative MP Rob Anders, a reliable contender for space on this page in past years, outdid himself in 2012 by claiming that NDP Leader Thomas Mulcair “helped hasten” Jack Layton’s death. The Calgary MP, known for sleeping in the Commons and for dismissing Nelson Mandela as a terrorist, told a reporter that Mulcair implicitly pressured the cancer-stricken Layton to relinquish the NDP leadership in the run-up to the 2011 election—a theory the Prime Minister’s Office quickly disavowed. Anders wound up grovelling to Layton’s widow, Olivia Chow. But his apologies weren’t enough for some. One Calgary man started an online petition to have Anders removed from the Tory caucus.

If you think U.S. conservatives are taking the whole gay marriage thing badly, consider the reaction of billionaire playboy Cecil Chao Sze-tsung. The Hong Kong shipping tycoon was so upset when his 33-year-old daughter, Gigi, wed another woman in France that he put up a $60-million reward to any man who could turn his daughter straight and walk her down the aisle. “Gigi is a very good woman with both talent and looks,” he said. Then again, he has precious little wisdom to offer: Gigi is the oldest of three children Chao had with three different mothers, none of whom he wed. He claims to have slept with more than 10,000 women.

This land was made for JTF 2

You’d think Ottawa would have more respect for ground as hallowed as this. Last spring, the feds announced they would force 84-year-old Frank Meyers to sell them 220 acres his family has farmed for more than two centuries, starting with his direct ancestor, the Loyalist war hero Capt. John Walden Meyers. King George III granted the plot as thanks for Capt. Meyers’s service in the American Revolutionary War. But it was part of an expanse near Belleville, Ont., the military wished to turn into a top-secret training ground for its elite JTF 2 special forces squad. Frank, who has worked the land for seven decades, was reportedly in tears at a public hearing when his daughter Elaine made an impassioned yet futile plea to keep the property. “I cannot begin to imagine what he is feeling right now,” she said.

From frying pan to fire

As if coming down with type 2 diabetes weren’t enough, celebrity chef Paula Deen was accused of hypocrisy last January after it emerged she’d hidden her disease for three years while promoting dishes like “chocolate cheese fudge”and the “sausage pancake egg sandwich”. Things got downright nasty after the 65-year-old U.S. Southerner partnered with a drug company that provides treatments for diabetics. Sniped one former fan to Fox News: “Many of us have watched the ‘Buttuh Queen’ for years cooking with no thought for the consequences, and waited to hear she was diabetic.”

Life got a little harder for the jobless in 2012 after the federal government announced it would tighten terms for frequent users of employment insurance. Under the new system, recipients have six weeks to find a job in a similar occupation at 80 per cent of their previous pay (compared to 18 weeks for occasional workers), and then must be willing to work at a job within a one-hour commute—longer in some places. Anyone looking for sympathy isn’t going to get it from the Harper government. “There is no bad job,” said Finance Minister Jim Flaherty. “The only bad job is not having a job.”